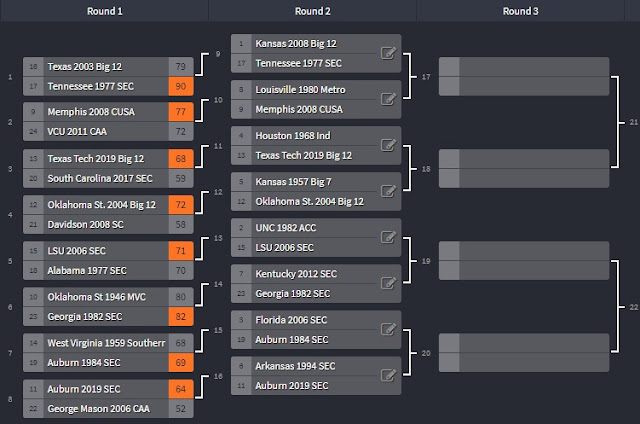 If you are counting conference representatives, half of the second round teams are from the SEC (8), followed by the Big 12 (or Big 7) with 4, then one each from the ACC, Metro, Conference USA and one independent.

After the South Region started with two upsets with Charles Barkley and Dominique Wilkins leading cliff hanger wins, the favorites won five of the next six to close out the opening round in the South Region with a 5-3 edge.


Table key: dunks = number of uncontested scores out of 36 rolls from 11-36, Stop Dunks = number added (bad) or subtracted (good) from opponents dunk range, Pred Off = average score resulting from team playing cards in 66 possession Value Add Basketball Games against all top 100 teams in history, Pred Def = average points cards would allow in the those games, Net = difference between those two which is used as the teams rating for seeding or knowing who is favored in a given game by how many points (difference between two net scores). E.g. Arizona's 14.2 indicates it would average defeating LSU (5.5) by 8.7 points if they played hundreds of times.  Click here for all box scores from tournament games.

The first South Region All-Time March Madness game was the first to feature the new Value Add Basketball Game Player Cards - which are much easier to print out and have more of a vertical look than the previous cards. Below see a photo of the layout of the game at the end of the game. 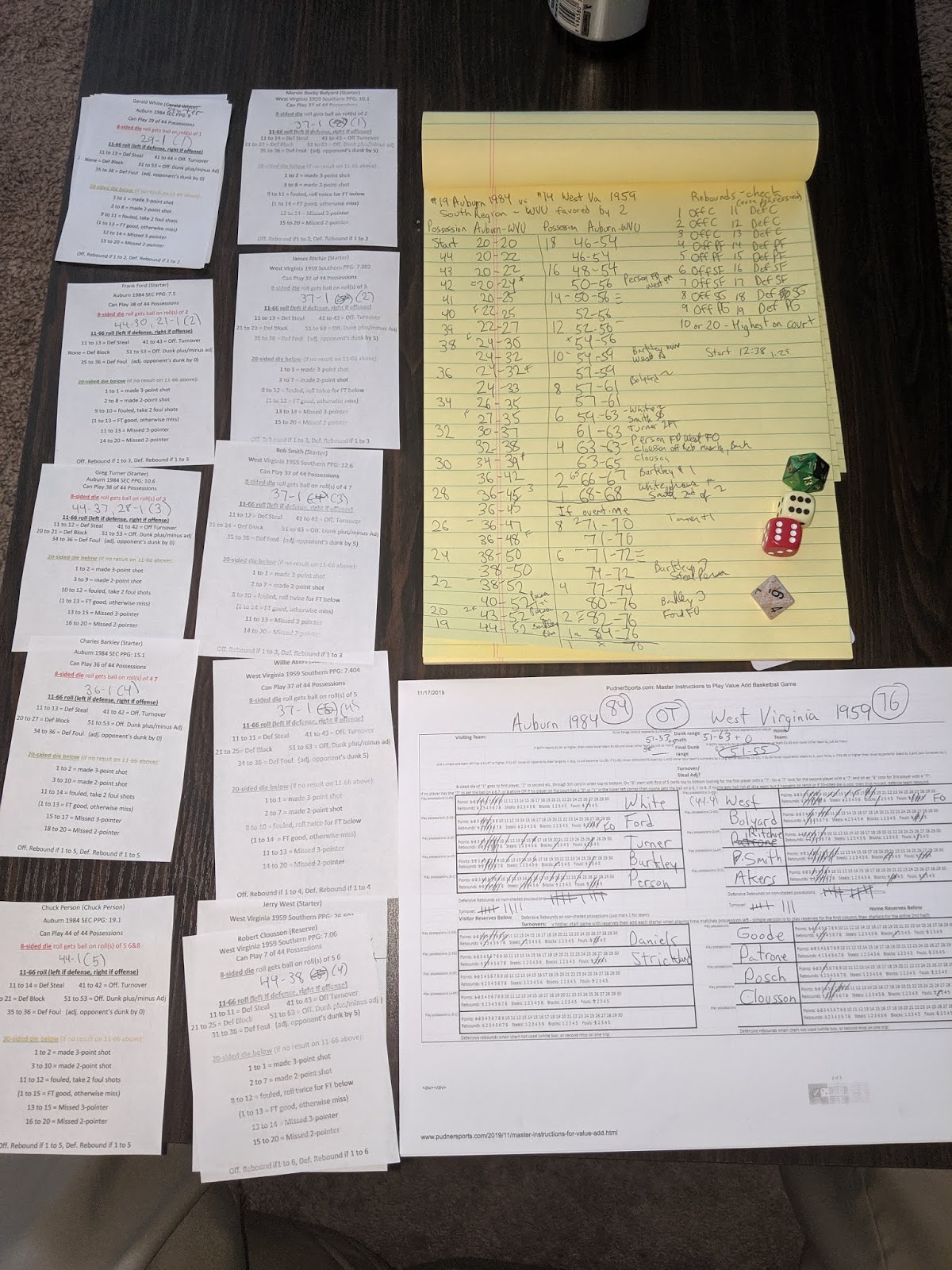 
The first game with the new card layout turned out to be the most exciting game to date and the first upset of the tournament (though West Virginia wins by just one to two points on average in simulated games between the two).

Jerry West and his 1959 West Virginia dominated most of the game, leading until the final four possessions of regulation including a 52-38 lead in the second half. At that point Charles Barkley only had 6 points.

On the crucial play with 4 possessions.left for each team (less than 3 minutes), Chuck Person went to the hoop and drew the fifth foul on Jerry West, hitting both free throws to tie the score 63-63 with West out for the game after a 19 point, 7 rebound game. His backup Robert Clousson did score to regain the lead 65-65, but with only two trips left Barkley scored and drew a foul for the and-one old fashioned 3-point play to give Auburn their first lead at 66-65. However, West Virginia made it 67-65 leaving each team with one possession to go for each team.

Both teams committed fouls on their final defensive possession - with Auburn's Gerald White (a 65% free throw shooter who makes his shot on a roll of 1-13 on the 20-sided die) hitting both to give Auburn their second lead of the game at 68-67, and then West Virginia's Bob Smith (70%, 1-14 made) missing the first shot and then making the second one to send the game to overtime at 68-68. If he had missed the second, the team's could have battled for the rebound but the offense is less than half as likely to get an offensive rebound on a free throw as on a regular shot missed, making UVa's intentional miss last year all the more amazing).

Auburn dominated the overtime with West out of the game.


The first big upset of the tournament came from an unbelievable start and finish from Dominique Wilkins' 6-point underdog 1982 Georgia team over the first dynasty - the 1946 repeat champions Oklahoma A and M.

With VABG games always starting 20-20, Georgia started with the games first ever five point possession, and set a game record by leading 32-20 after just 5 possessions. Gerald Crosby hit a three to start the game and was fouled. He then missed the free throw and Wilkins grabbed the rebound, was fouled himself, and hit both free throws to make it 25-20.

It was the beginning of one of those Wilkins' games. On the last possession leading 80-77 and knowing Oklahoma A and M still had one trip left to try a 3-pointer, Wilkins missed a shot, but grabbed his 14th and 15th rebound of the game before scoring his 32nd point of the game to clinch it 82-77.

Star Bob Kurland hit a 3 on the final trip to cap his incredible 22 point, 12 rebound game but it was too little.

Kurland was the 7-footer who once scored 58 points, was truly the one who kept blocking shots above the rim to force the new goaltending rule, was MVP of the final 4 for both national titles, and took three AAU national titles in addition to playing in the pros.

Now that they are past one 7-footer, Georgia gets another by advancing to play the 7-seed, Anthony Davis and the 2012 national champs from Kentucky.

Davis finished OT with an offensive rebound and score for a 77-75 lead on the next to last trip then a dunk to end the game 79-77. 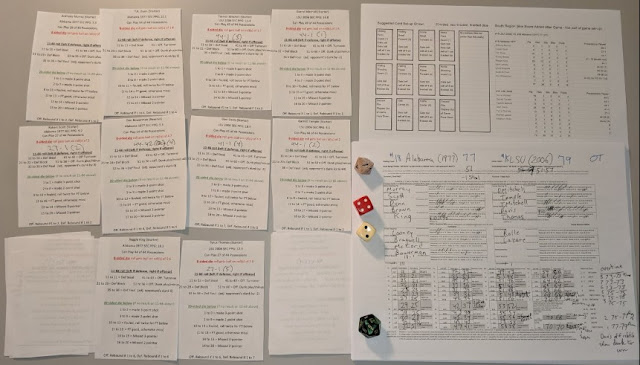 
Bernard King led torrid shooting by the 1977 Tennessee Vols as the first team to score 90 points in regulation. The games are based on 66 possessions though one fast break steal and score by Texas TJ Ford extended this game to 67 possessions, meaning the Vols averaged 1.34 points per trip (over time the average is about 1.00).

Ford and back court mate Brandon Mouton put up incredible efforts that would have beaten any but a hot shooting opponent, as each of them scored 19 and they committed only 9 turnovers the entire game. The Vols did block 7 shots however.

Tennessee will need to be hot again in their next game against a better defensive team in the 1-seed in the South - Kansas 2008 national championship.

As magical as Stephen Curry's 2008 run was to take 10-seed Davidson to the Elite 8, the teams over reliance on him created a tough match-up when he faced one of the best defensive guards in the game - Oklahoma State's Tony Allen. Curry averaged 25.9 points per game - more than twice any of his teammates, but Allen (who built a 14-year NBA career as a defensive specialist) harrassed Curry to become the first player in my tournament to register 6 steals in a game and held him to 15 points in a 72-58 win.

Davidson's best chance occurred with 11:31 (19 possessions to play) when Curry hit a 3-point shot while drawing the 4th foul from Allen to get Davidson to 46-43. However, he avoided fouling out the rest of the way. While a hot Davidson could beat anyone - they fell only two points short to eventual champion Kansas in the Elite 8 that year - they were ranked #23 even after the March Madness run, while Oklahoma State won the Big 12 regular season and tournament before falling two points short in the National semifinal and was ranked #4 after the tournament.

In the game, they now must face Wilt Chamberlain, who led another Big 8 champion to the title in 1957, only it was still the Big 7 then. Here is the box score and photo of the scorecard and the player cards for Curry, Allen and the Cowboys' John Lucas. I played the game in 31 minutes after watching Stephen Curry's combined 4,736 points with his brother Seth Curry fall to the second best combo from two brothers behind Marquette's Markus Howard, who scored 32 points, and his brother Jordan Howard. 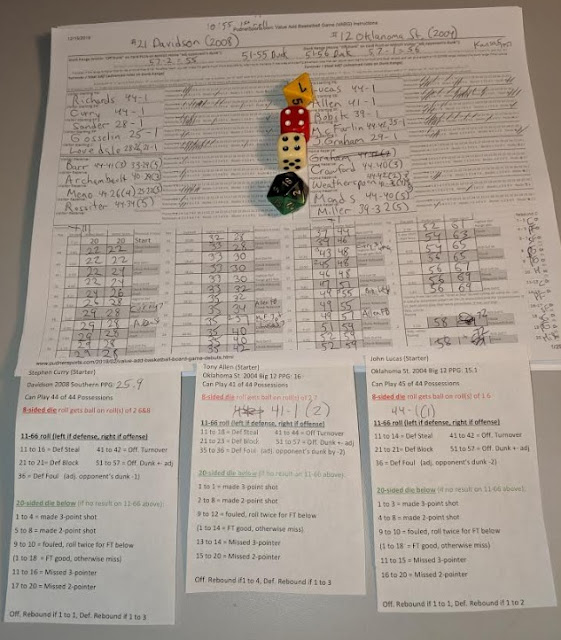 Memphis was on the verge of winning the most lopsided blowout of the tournament so far with a 71-54 lead, but VCU finally turned up the pressure for a furious run in which Bradford Burgess' 4-point play capped an 18-4 run to pull the Rams within 75-72. Unlike the 2008 National Championship, Memphis hit two free throws to lock it up. It turned out to be a great game for a complete wrap up post of it's own and examples of how to set up a game, and how a game can be extended with fast break steals and going for a steal or foul.


The miracle GMU Final Four team was blitzed early by last year's Auburn Final 4 team for 10 straight points to make it 30-20 and could never catch up. The player cards for this Auburn team are elite - they dominated when at full strength in the real season, finally getting Danjel Purifoy and Austin Wiley to dominate even UNC and Kentucky with a team that looked like it could compete with most of the best in history - only to have their best player Chuma Okeke and still only lose at the last second to UVa short-handed again.

Auburn advances to play #6 seed Arkansas 1994 with 40 minutes of hell. I've started to write the box score and some game highlights all on the score sheet so it is all together with the running score. 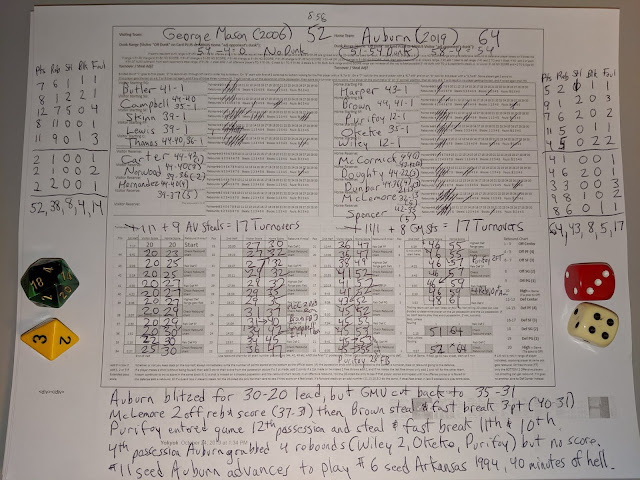 
South play wrapped up with a game to see who would face #4 Houston 1968 and Elvin Hayes (36.8 points per game and 18.9 rebounds per game). Summary on the score sheet below. 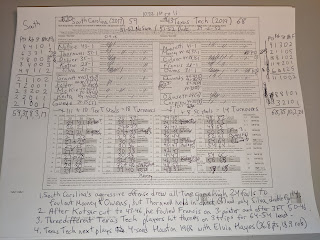 More to come
Posted by JohnPudner at 5:47 PM