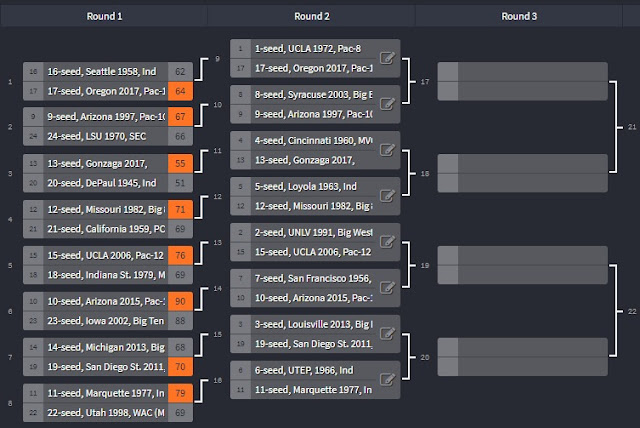 Note that in the bracket we record overtime games as the regulation score plus 1 for the eventual winner. Arizona's 67-66 win above was a 66-66 tie in regulation that ended with a 90-88 win in two overtimes over Iowa. Oregon and San Diego State were upset winners, favorites won the other six games (6-2).

If you are counting conferences the Pac-12 (or Pac-10 or Pac-8) has 5 teams, 3 teams were independent, 2 from the Big East, and then one each from the Missouri Valley, Big West, West Coast, Moutain West, Big 8 and finally the undefeated San Francisco team with Bill Russell from the California Basketball Association.


9-seed Arizona 1997 avoided an upset by Pistol Pete Maravich and 24-seed LSU 1970 by a score of 85-77. Jason Terry and Mike Bibby harrassed LSU into 15 turnovers (to only 8 by Arizona) and Bibby's 32 points en route to the 85 points in the 66 possession game against the worst defense in the tournament.

Maravich countered with 28 points including one stretch of four trips down the court in which he was fouled on a 3-point shot and hit all 3 free throws, hit a 2-pointer and then his a 3-pointer to cut the Arizona lead to 49-48. The win advances Arizona to play Carmelo Anthony's 2003 Syracuse team, the 8-seed in the West Region with the winner potentially playing the top seed in the whole tournament - Bill Walton's 1972 UCLA team. 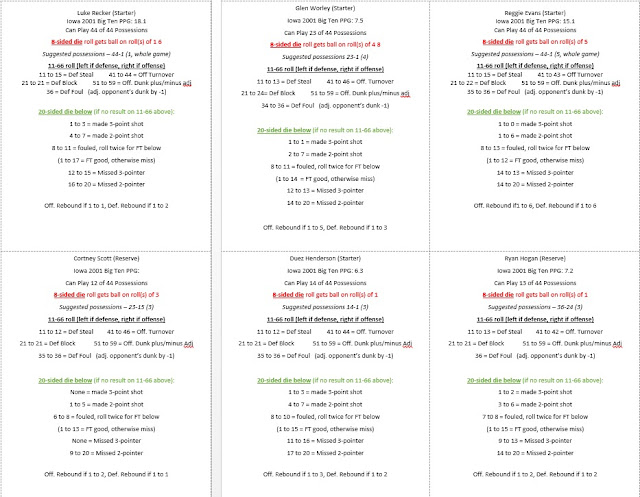 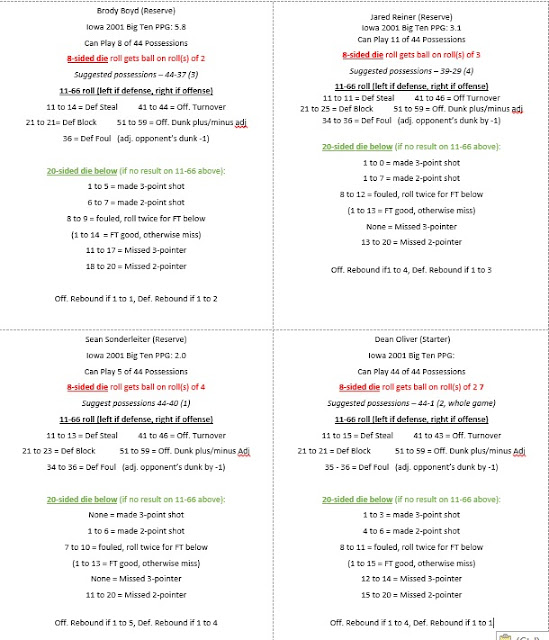 
In perhaps the most amazing sports board game I've ever played in any sport, #10 West seed Arizona (2015) almost become the biggest upset victim to date. The match-up was tougher than I meant for them to face opening round. When I did the 21st century teams I only had tempo free stats back to 2002 so I made the Iowa team from that year to get the great center Reggie Evans and guard Luke Decker.

However, after developing formulas to add all the 20th century teams and set up this tournament - I realized I could actually now produce the actual surprise Big Ten tournament 2001 champs from Iowa - a team driven by a third great player in Dean Oliver who made Decker and Evans better in 2001 even then they were in 2002 without him.

Still, Arizona featured one if the top guard duos in value add history in TJ McConnell and Stanley Johnson.

However Recker drew fouls on McConnell until he had 4 fouls with 28 possessions still to play. The rest of the game he had to play avoiding fouls, which led to easier chances for Recker who had 30 by the end of regulation with Iowa leading 66-62 with only two possessions left.

On the final possession, Glen Worley had a game-clincher, but Brandon Ashley rejected the shot. At the other end Kaleb Tarczewski missed the game thing shot, but Ashley rebounded that as well, was fouled, and hit both free throws to force overtime.

McConnell finally did foul out early in the OT and Iowa led 76-71 with 4 possessions left, but his sub Parker Jacksin-Cartwright hit a 3 to make it 78-76 and buckets the last two trips by Tarczewski left another tie at 80-80.

In the second OT it was 86-86 with two possessions left, when Evans missed a shot, got his own rebound, was fouled, but then missed bother free throws (he is only good on 1-12 onna 20-sided die as a 60% free throw shooter).

Hollis-Jefferson scored the last 2 trips and Ashley came up with another block to let Arizona escape 90-88 in 2 OT. The advance to play the first ever undefeated national champion in Bill Russell's 1956 San Francisco team.


Using our new one-page scoresheet, we posted a full account of this game of former Rick Majerus teams on the Marquette-centric blog Cracked Sidewalks (click here).


Despite a double double from Elgin Baylor (17 points, 10 rebounds) the 1958 Seattle University lost a 62-53 lead in the final 3:45 as the Oregon Men's Basketball 2017 team used 2 steals and 3 three-pointers to win 64-62. The Ducks will now play the overall favorite 1972 UCLA Men's Basketball featuring Bill Walton in the 96 team all-time great tournament. Value Add Sports Sports Simulations and Replays. It was my first game using the updated score sheets that includes the rebound chart and which position gets other rebounds, and the game played in 35 minutes exactly.


Missouri, which rose to No. 1 for part of the 1982 season before a disappointing tournament, dominated most of the game with the trio of guard Sundvold (17 points) and front line players Frazier (17 points, 10 rebounds) and Stipanovich (15, 10). A double point lead almost slipped away late behind Imhoff's 18, 17 outing including many offensive rebounds for Cal's poor shooting 1959 national champs. After Cal intentionally fouled and Mizzou missed both free throws, Grout hit a three-pointer with 1:15 to play to make it 69-69 for the first tie since 20-20. However, Bridges had a steal and fast break and Missouri pulled out the 71-69 win to advance and play the 1963 National Champions from Loyola-Chicago.


A full account of this defensive battle of giants is on this Facebook link with a video of how to start and set up a game. https://www.facebook.com/valueaddsports/videos/998163883904298/

Our showdown between Kawhi Leonard's San Diego State and the Michigan team of Glen Robinson III - so of the overall No. 1 NBA pick featured an all-time game high 17 lead changes in just the 45 possessions we played out after the 20-20 start of the game. The Value Add Basketball Game features at least 44 possessions, but fast breaks off of steals in the last nine possessions add an extra possession - as it did when Tapley stole to start a fast break for San Diego State on what would have been the last possession to create a 45th possession.

We updated the game rules to point out Kawhi is the perfect forward when positing players in the game because he is so dominant as both a rebounder and steals player. He and Robinson balanced each other off at the opposing power forward (4) spots with tough defense on each other and each drew four fouls on the other but neither fouled out.

Staukas twice hit 3-pointers including giving Michigan a 42-40 lead and the tying it 50-50, and twice was fouled shooting a three-pointer including taking the 60-59 lead from the line. The Wolverines actually trailed in rebounding until McGary game in with 21 possessions to play - and he dominated with 10 rebounds in those last 21 possessions to help Michigan win the rebounding battle 36-30.

While Kawhi Leonard led San Diego State with 13 points, the balanced attack was helped by a key block by Thomas and game-high four steals by Tapley that were key in the win. Thomas' block of McGary's shots with 3:07 (5 possessions left) kept the score at 64-63, Tapley hit a three-pointer to give San Diego State a 66-64 lead and then Kawhi rejected Robinson to keep the lead.

Tapley stole the ball on what would have been the 2nd to last possession with a 68-66 lead, but missed a fast break shot which left San Diego State with one possession left and Michigan with two. Robinson scored to tie it 68-68 and leave both teams with a final possession. Tapley got to the hoop and scored to make it 70-68, and then McGary's potential game-tying shot missed and Tapley grabbed the rebound to prevent a second chance at overtime and send San Diego State to play 2013 Louisville in the 2nd round. It was only the 2nd upset of eight West Region 1st Round Games.


This concludes the summaries of the West Region 1st Round Games.
Posted by JohnPudner at 5:49 PM