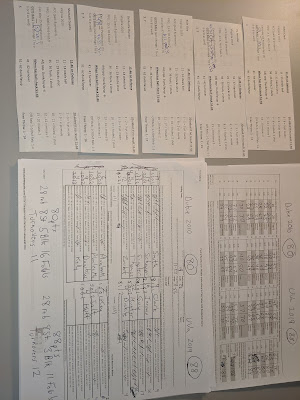 Update: We are basically playing conference games until each team has two losses. In Big 12 play Kansas has dominated, but Texas defeated St. Joe's 70-53 behind a 40-29 lead in rebounding to improve to 2-1.

In the ACC, UVa defeated 2010 Duke 88-80 to be the only one loss team in the ACC (3-1) to trail only Carmelo Anthony's 2003 Syracuse - which rallied to beat 2005 UNC. Here are the standing for all 6 conferences. The google sheet with all results to date is here, and these instructions on how to play the Value Add Basketball Game continues to be my most popular.


Each team scheduled for a 7-game schedule against the rest of the conference, then the top two teams in each conference going to a tournament as well as the third and fourth place ACC teams.

However, the six first place teams all go straight to the Elite 8, while the others who make the tournament will need to win two games to make the Elite 8. All details are in this google sheet.

Yes, I want to calculate cards for Larry vs Magic and all the other 20th Century greats, but I need to figure out new formulas since these cards are based on modern tempo free stats.
Posted by JohnPudner at 6:51 PM