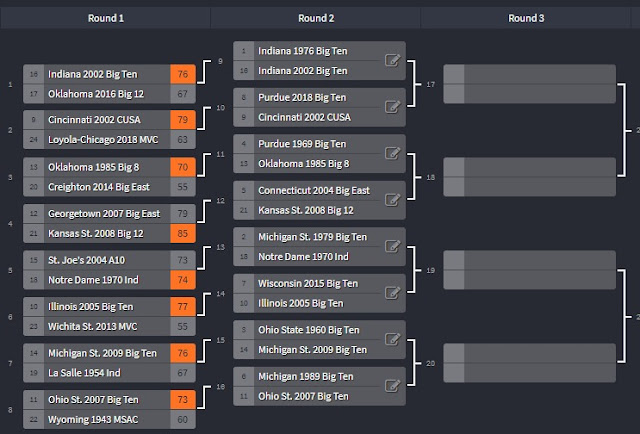 Counting conference representatives in the second round the Big Ten has 11 of the 16 teams,  the Big 12 two, the Big East 1, Conference USA 1, and there will be 1 independent in Notre Dame.

That were two upsets in the first five Midwest games (favorites 3-2)
.
Here is the master list of all 96 teams and predictions. Click on the East, West, Midwest and South bracket to follow the results in each, or click on the Value Add Basketball Game instructions to get the free game and play for yourself. Click here for the google sheet with player cards for all 96 teams. Click here for box scores to all tournament games. 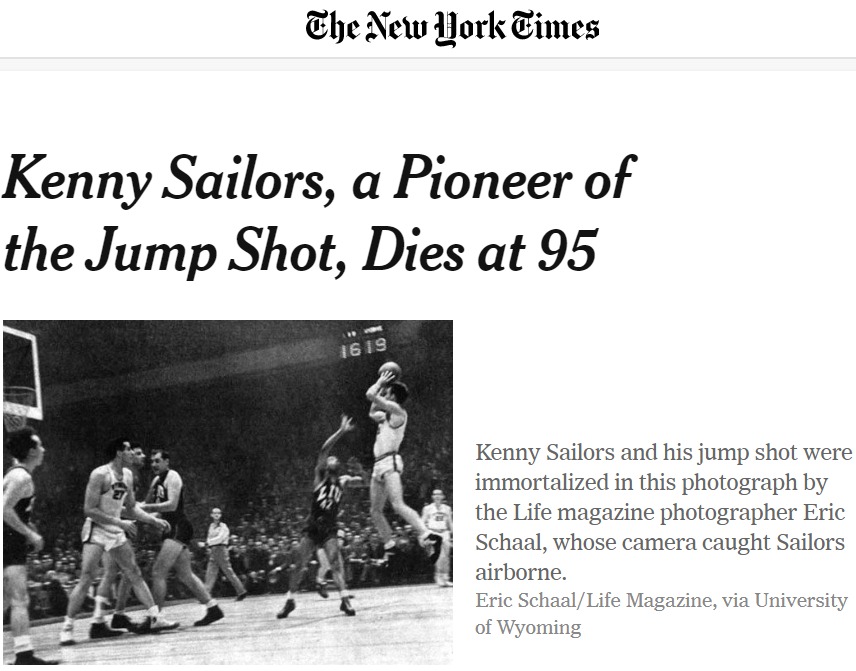 Before taking two years off from his All-American career at Wyoming to fight as a Marine in the South Pacific, the 5-foot-10 Ken Sailors invented the jump shot to shoot over his 6-foot-4 brother and is described as a modern Markus Howard from Marquette - dribbling around and through players. The 1943 team he led to a 32-1 record despite needing to travel for 24 of those games (the NCAA election committee would have loved that), shocked Georgetown for the NCAA title and then shocked NIT champion St. John's in a game between the two champions.

We opened the All-Time Midwest March Madness with Sailor taking on the 2007 Ohio State team, and while Sailors two big men underneath - Jim Weir and Milo Komenich - kept it respectable with 19 rebounds, in the end the Buckeyes will too much and advanced to play their hated rival in the #6 seed Michigan that won the 1999 title. By the time Sailors hit his first jumper, Ohio State led 42-32.

Mike Connelly and Greg Oden took over with the inside-outside game during five possessions after Wyoming cut it to 44-39. Connelly's steal denied Wyoming a chance to get closer, Oden then scored after an offensive rebound, and Connelly scored and was fouled on his next trip, before Oden showed why he is one of the best shot blockers in history with a block, and Ivan Harris' dunk pushed it back to double digits at 57-46 and Wyoming never threatened again. Obviously decades of training made modern athletes much faster and stronger than players from eras past, based on the level of play at hte time Wyoming's player cards left them only a 4-point underdog to Ohio State on the game based on the table above.


Notre Dame's 1970 team trailed the whole game until Collis Jones drew a foul in the final seconds, hit the 1st free throw to cut Saint Joseph's University (2004) lead to 73-71, then missed the second only to have Austin Carr grab the rebound and score to tie it 73-73. The Irish won 82-80 in OT to advance to play Michigan State Spartans 1979 with Magic Johnson in the next round of my Midwest tournament.

LaSalle's Tom Gola looked every bit the all-time college basketball rebound leader (2,201) as he led the game in rebounds (10), points (20) and was the first to block 6 shots in a Value Add game. However LaSalle's low field goal percentage doomed them to a 76-67 loss to Michigan State's 2009 team featuring The freshman Draymond Green.

Kalin Lucas scored 19 to lead the Spartans to a second round game against the 1960 Ohio State team.

On December 17, 2019 I looked at my brackets to pick the next game, when I realized I had a match up between the two teams on my TV. In real basketball Craig McDermott's 2019 Blue Jay's were taking care of Oklahoma 83-73 to give the Big East a 5 games to 2 edge in the Big East-Big 12 challenge.

Our great teams matchup featured Craig's son, th 2014 National Player of the Year Doug McDermott. Their opponent was 1985 Oklahoma and the late, great Wayman Tisdale in his junior year. The annual award for the best freshman of the year is still named after Tisdale for his 1st team All-american freshman season two years earlier.

Tisdale put up 21 points, 12 rebounds and 3 blocked shots - all game highs to help the 1985 squad to a 70-55 win. The key to holding the scary good 3-point shooting Blue Jay's was Oklahoma's incredible pressure defense, racking up 9 steals to win the turnover battle 17 to 11.

McDermott scored 14 but the key may have been sharp shooting center Ethan Wragg hitting an early 3-pointer but then seeing what would have been a second straight 3-pointer rejected by Tisdale. 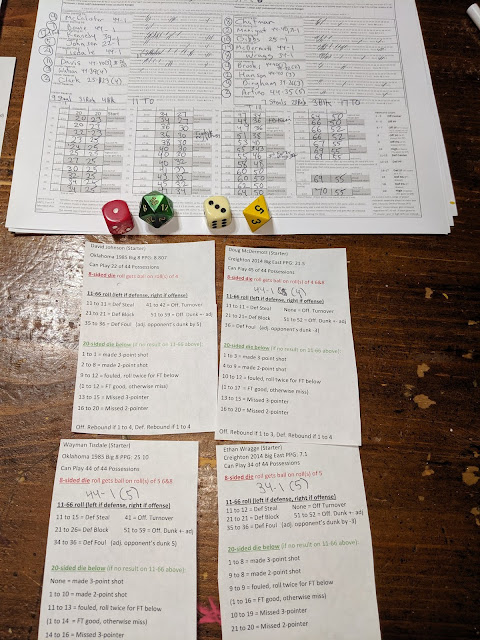 One of the greatest players ever, Michael Beasley, turned in one of the best performances in the game to date with 24 points, 14 rebounds and 4 blocked shots plus drew a 5th foul on Roy Hibbert. K-state now faces another giant Big East team in UConn 2004. 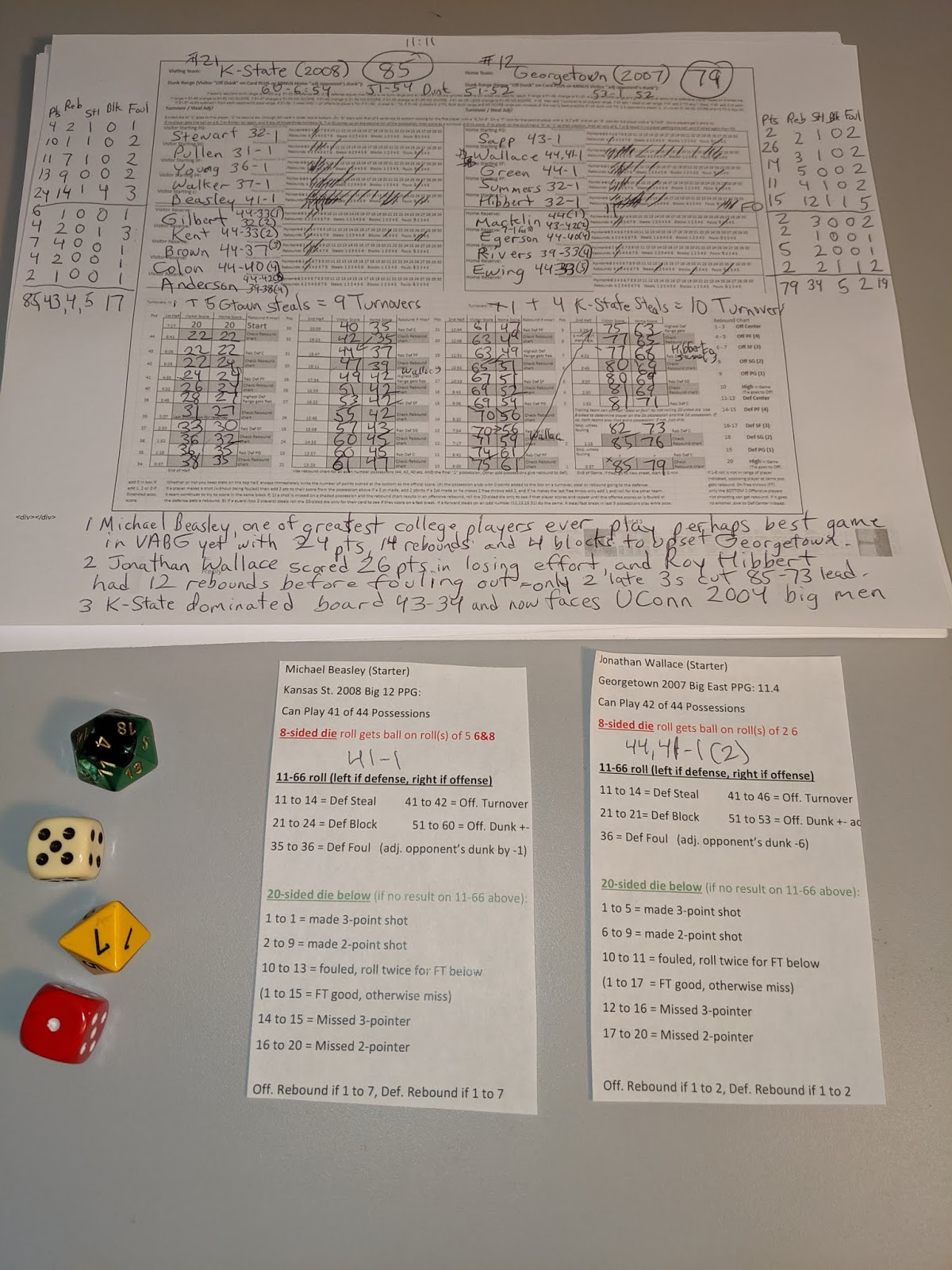 The first thing we know about the all-time round of 32 March Madness is that Indiana University will be represented. The 2002 Indiana team set a game record in steals (13) and forced turnovers (20) to contain Oklahoma 2016s Buddy Hield 76-66.

Through the luck of seeding, at least one Indiana team will now make the next round as well since the 16-seed 2002 Hoosiers now face the 1-seed in the Midwest Indiana 1976, the last undefeated national champs. 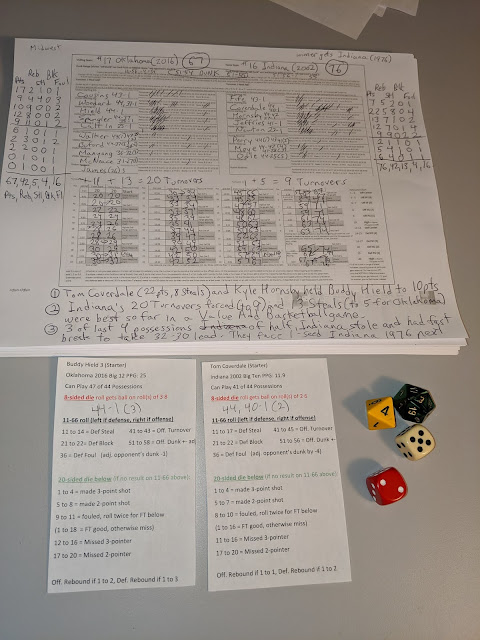 Deron Williams led the Illini to the most lopsided win of the first round, 77-55, to set up a Big Ten 2nd round game vs the Wisconsin 2015 that in real life knocked off a Kentucky team some considered the best ever. Williams, Luther Head and Dee Brown each had multiple steals and out scored their counter part starters at the first three positions 49-16. 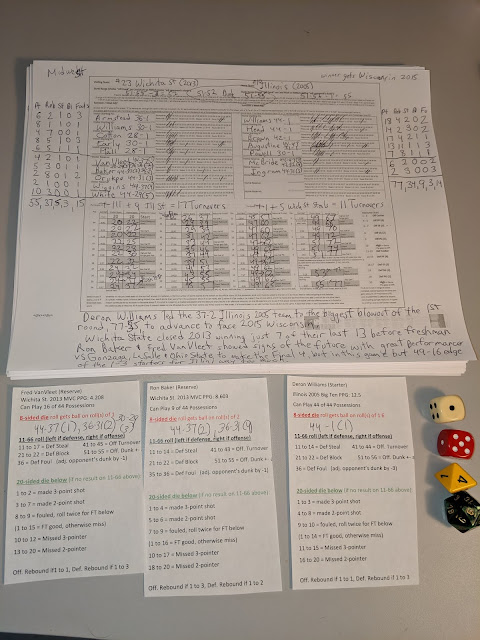 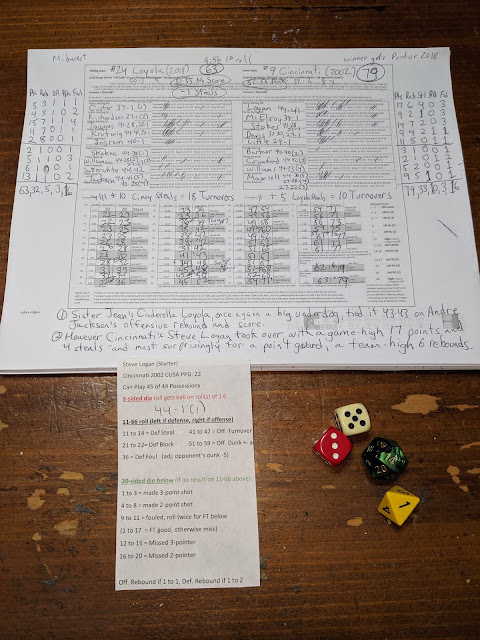 Posted by JohnPudner at 5:46 PM