Derrick Rose and Memphis proved way too much for another Cinderella run for VCU, who Jay Bilas famously said should not have even been in the 2011 tournament (much less the all-time great presumably) before Burgess led them on a stunning Final Four run. It turned out this dice game was a nice sample game for how to set up the cards, determine when to play reserves, and the rules that let a good steal team like VCU add possessions late in the game to make a furious run that cut their deficit from 71-54 to 75-72 when Burgess has a 4-point play in the closing minute. Memphis hit two free throws (the thing they actually failed to do to wrap up the national title against Kansas that year) to wrap it up 77-72.

The Value Add Basketball Game Scoresheet as I record action


Here is the final score score sheet from my Value Add Basketball Game in the South Region of my all-time great tournament between the 2011 VCU Rams and 2008 Memphis. Here is a sample of what I like to record on the free score sheet provided with the free game you can  get by clicking here.

The only thing you must record to play the game is the running score in the bottom half, where you will see Memphis actually dominated until the final 7 possessions (4:22) of the game, when Memphis led 71-54. 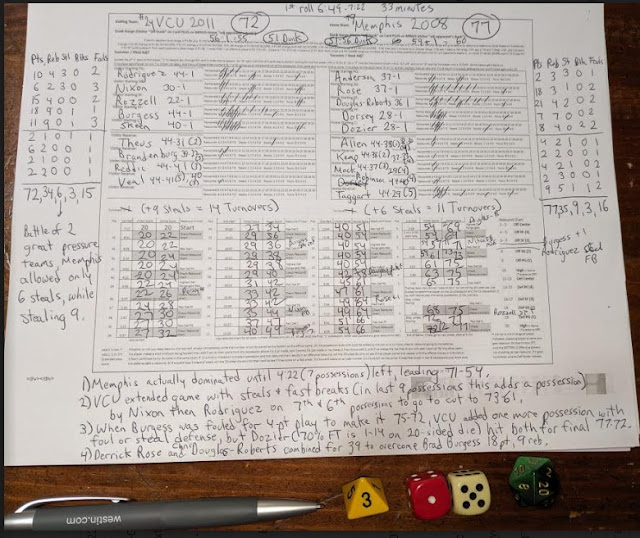 I do track the basic stats on the top half of the sheet. Occasionally you may find you accidentally failed to mark two points for a score at the top of the sheet, or listed it twice, so making the running score at the bottom the official score is key.

Usually the updated score is included in each box to count down the 44 possessions in the game, however, in the final nine possessions of the game - the right column of four - you can end up with multiple extensions. This happened three times in this game.

There are two scores written for each team in possession 7, because Nixon stole the ball and the "fast break" option was used which means only the 20-sided die is rolled and Nixon's card is used and an extra possession is created (only during the final column's 9 possessions). As you can see two scores were written for each team in the "7 possession" box, and then the same thing happened on the "6 possession" box because Rodriquez stole the ball on Memphis' "2nd" 7 possessions box, and scored on the fast break roll - so the bottom right corner of the 7 box for Memphis was another 71 when he stole it, and then the top left corner of the VCU "6" box is a 57 to add the two points from the steal and bucket. That steal led to the two possession in the 6 boxes as well, giving VCU extra chances to catch up. These two teams are two of the best steal teams in the game, and Memphis and Derrick Rose protecting the ball most of the game with the 9-6 edge in steals was a key to them dominating most of the game. Memphis actually stole the ball on the "5" possession next, but rather than extend the game further they ran the regular offense with four dice rolled so neither team got an extra possession.

The other extra possession was gained when Burgess hit a three-pointer and was fouled on the "2" possession to suddenly make it possible to catch up at 75-72, so VCU went for the "steal or foul" option of only three dice being rolled (skip the 20-sided die) which means the team can still steal or force a turnover BUT on any other combination on the 11-66 dice rolls is a foul and two shots for the player pointed to by the 8-sided die, and that creates the extra "2a" or in this case "1a" box. However, VCU failed to get the steal and Memphis hit the two free throws to put it out of reach 77-72.

I like to write out the total stats in the side margins, and a couple of notes on the game on the bottom just because I was originally a journalist, but all that is optional in the game of course.

Going Back to the Set-Up Before the Game


This game is also a good example for setting up the game and determining rotations.

The first photo was all the VCU players laid out. The first trick is to layout the starters from top to bottom (see 5 players stacked to the left) to figure out how many possessions each player can play and in most cases write the number of possessions they will play - usually starters playing the "final" possessions.

Rodriguez and Burgess can play all 44 possessions in a game, so we simply write "44-1" on their cards and on the score sheet with a (1) and (4) to show I put them at those possessions.

On the other hand, Rozzell is a starter but can only play 22 possessions, half the game, so we put him as a 22-1 at the (3) but found two other players who could fill in the rest of the possessions and I chose to give Reddic, who can play five possessions, the first five - 44-40 (3) - and then Brandenburg the possessions in between - 39-23 (3). 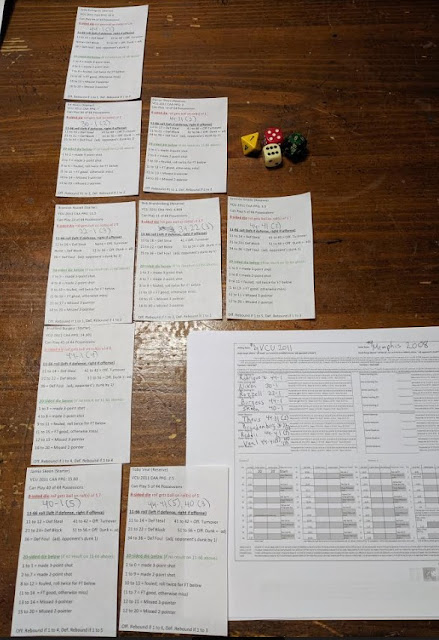 For Memphis we did have five starters (left) and then five reserves, but Dorsey and Dozier in the 4 and 5 spot both could only play the final 28 possessions (28-1), so I needed to fill in the rest. The five spot was easy because Taggart can play enough possessions to fill in the rest, so I made him 44-29 (5) with Dozier 28-1 (5) and all 44 possessions were covered. Filling the rest of the possessions required all four of the other reserves, but note that some played a few possessions at one possession then could move over to the (4) at different times, so as one example Allen started at the (1) but then later came in at the (4) so at the beginning of the game we wrote on the sheet "44-38 (1), 32-30 (4)" so we have notes on when he is in the game.

I then stack the cards with reserves on top, but by writing these out first thing I can catch if a dice roll or rebound goes to a player on a given possession and I realize at that point he has actually moved from that possession. 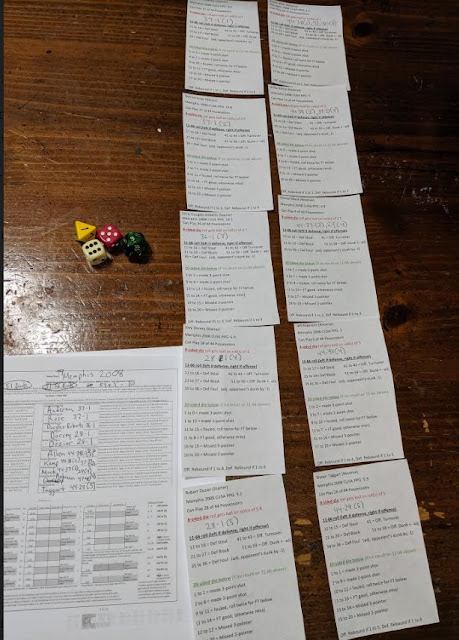 Posted by JohnPudner at 6:30 PM