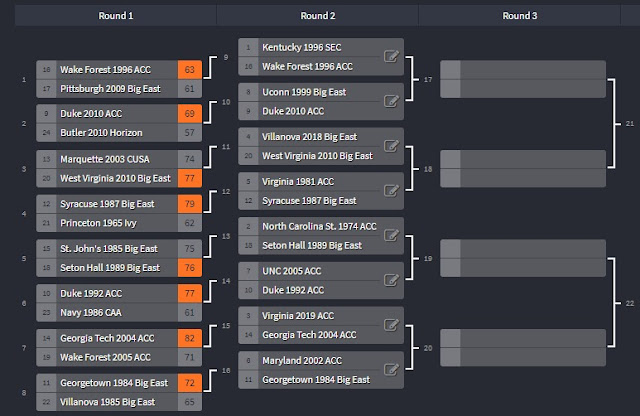 The 2nd Round in the East includes 9 ACC teams, 6 Big East teams and top-seeded Kentucky 1996 from the SEC.

The seeding in the East gave us one actual rematch of a championship Butler missed a national title by one shot vs. Duke in 2011, Duke is an 8-point favorite in the rematch for a chance to advance and play UConn 1999, the No. 8 seed that beat another great Duke team for a national title.

However, we started with perhaps the two biggest heart break franchises of the past several decades - Pitt and Wake Forest - the closest match-up as the #16 and $17 seeds with Wake Forest 1996 a bare 0.5 points favorite against 2009 Pitt (11.3 to 10.8 net points in simulations above).

It is amazing that with all of the incredible players and teams these two schools produced while playing in the rugged ACC and Big East - neither team made a Final 4 in the past 35 years as each seemed to just keep hitting that one bad match-up year after year (Pitt hitting Dwyane Wade and eventual runner-up Butler early in two tournaments). Our dice game was between the only team from each school to even make the Elite 8 in those 35 years - as Tim Duncan took Wake to their third Sweet 16 in four years but only Elite 8 performance, and Sam Young and perhaps the greatest offensive rebounder in decades - DeJuan Blair - took Pitt to their 5th Sweet 16 in 9 years but only Elite 8. Wake did claim the ACC tournament title that year.

Tim Duncan grabbed an incredible 12 first half rebounds to lead Wake to a 36-24 lead before Blair even entered the game. (in the game, Duncan can play all 44 possessions, but Blair only 33 so we use him the last 33). Blair scored his second trip down the court and then he and Young took over for a long stretch to go from down 33-45 (25 possessions left) to a 48-47 lead when Duncan (one of the greatest shot blockers in the game) actually rejected Blair but Jermaine Dixon grabbed the offensive rebound to score and cap the 15-2 run.

With only two possessions left for each team (Pitt first, then Wake second as the home team), Pitt came down the court trailing only 59-60 when Wake's Jerry Braswell stole the ball and had the only fast break attempt of the game in the slugfest between two of the greatest defensive teams in the game. Baswell missed on the break, but Sean Allen grabbed the rebound and was fouled - hitting one of two free throws to make it 61-59.

Pitt worked it to Young, who drained a two for his 19th point to tie the game at 61-61. Young then played hero at the other end, rejecting Duncan's potential game-winning shot, only to have Allen grabbed the offensive rebound for the second trip in a row and score a lay-up to give Wake the 63-61 win.

Ironically I looked up the 1996 tournament after the game, and Wake beat Louisville by a similar 60-59 low scoring game, and Duncan has the same 13 rebounds in that game (but 27 points as opposed to just 10 in our dice game) and Allen grabbed the winning rebound in the final seconds to preserve the win - though that was on the defensive side (video here). In a coincidence, the 1996 Wake team now plays actual team that beat them in the Elite 8 that year - the 1996 Kentucky team that is the #1 seed in the East and actually destroyed Wake 83-63 in the real game. The simulation table above indicates Kentucky is just 8 points better than Wake, so an upset is possible, and that Wake team is not as strong as the top two No. 1 seeds, the undefeated 1976 Indiana and 1972 UCLA teams.


The great David Robinson's game high 10 rebounds helped Navy out rebound Duke 33-29 despite Missing many more shots - but he and Christian Laettner held each other in check scoring.

Laettner simply had two much support from Bobby Hurley, who pressured Navy into 16 turnovers while running a Duke offense that only turned it over 9 times, and Grant Hill. And people forget Thomas Hill, the leading scorer as those four starters all scored double figures, was also 3rd team all-acc and a star and picked on weaker Navy defenders while Robinson contained Laettner (and vice versa).

Duke now gets their dreaded rival UNC (the 2005 national champs) in the #7 vs #10 game, with the winner of that game potentially getting the No. 2 sees - Michael Jordan's 1982 team. To show the different ways I track games, I did this running score free hand in a pad (the player stats were still kept on the printed score sheets. Here is a photo to give you multiple options. 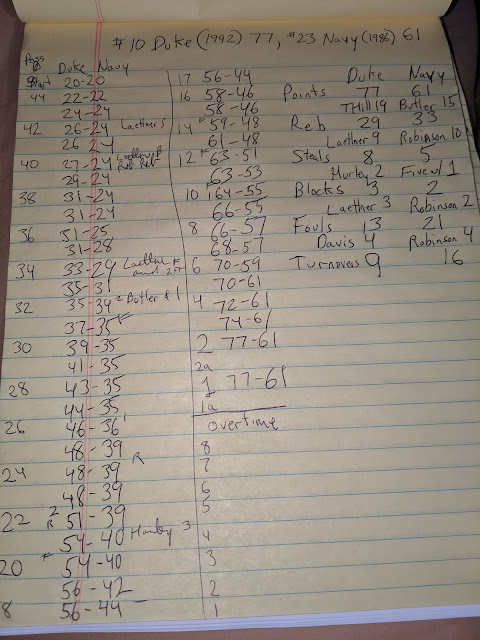 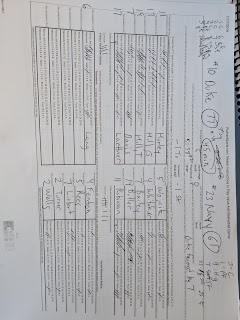 
Before he was a popular US Senator and Presidential candidate, Bill Bradley produced a 1965 Ivy League season that resulted in an incredible card. He averaged 30.5 ppg with an incredible ability to draw fouls (9-13 on 20-sided die) and then hit 90% of his free throws (1-18 on 20-sided die).

This from a great shot blocker and rebounder, and guard Ken Shank hit more that 60% of his shots to get 16.8 per game.

Unfortunately Princeton's team defense (+13 on dunks opponents's dunk range) was the worst in of the 96 great teams. This is a calibrated measurement of defense adjusted for level if competition - as is the dunk range on offense.

The disparity gave Syracuse's 1987 champs open lanes to the basket for layups and dunks on rolls of 51-66 - one third of offensive rolls.

Despite Bradley's 13 points and 8 rebounds and shank's 18 points Syracuse led by 20 down the stretch and won 79-62 to advance to face Ralph Sampson and the 1981 UVa team.

The three-point line was standardized in college basketball between the Final Four's featuring St. John's in 1985 and Seton Hall in 1989, and Andrew Gaze was one of the best in the country in hitting 94 of them at a great 43 percent clip. Gaze hit four en route to 24 points in this game, enabling the Pirates to edge past Chris Mullin 's 16 points and Walter Berry's 12 point, 12 rebound double double.

St. John's held the Pirates other sharp shooter, John Morton, without a three-pointer, but he hit two free throws with 1:15 to go to give Seton Hall a 74-73 lead, and he scored again to make it 76-73 with 37 seconds left and St. John's could not get a three-pointer off late.

Ed Pinckney's game highs in points (18) and rebounds (9) and drawing the fifth foul on Patrick Ewing with 5:29 (9 possessions) to play gave the 1985 Villanova a chance to repeat their real life championship upset of Big East rival Georgetown.

This however was the 1984 Hoyas team that also won the title (vs Houston) and was too much in the first game I've played that included 40 fouls and three foul outs. The Hoyas defensive cards are awesome, but Reggie Williams and Ewing have such high foul range that they could foul out in any game. However, they draw fouls too, and they helped the Hoyas win the boards 39 to 29 and draw 22 fouls with Dwayne McClain and Harold Pressley fouling out for Nova.

This was also the first game I played with no 3-pointers since neither team played with the arc, so the 3-pointers made ranges, which are estimated for early players anyway, simply counted as 2-pointers. Ewing's 13 points and 8 rebounds were team highs for the balanced Hoyas.

The Hoyas would not need to travel far for their second round game, as they take on the 2002 national champs from up the road at Maryland.

One other reason I am playing each team is to spot errors and I realized before the game that my program had deleted the great Patrick Ewing because it found another Patrick Ewing from Georgetown - his son on the 2007 team. However, here is his great card and I added the image by the link to the teams. 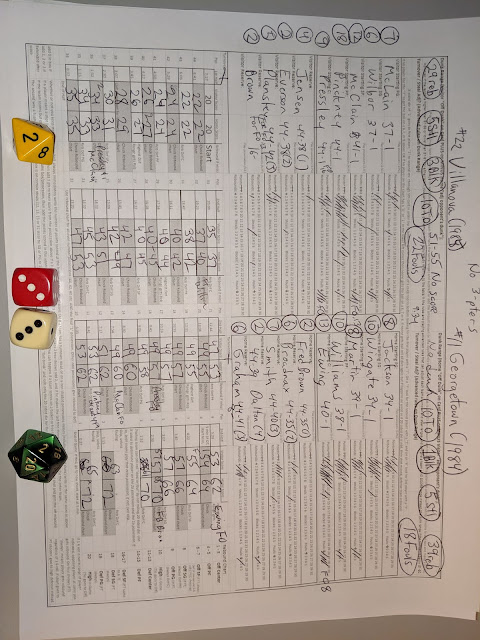 
West Virginia's overpowering offensive rebounding found the weak spot in Marquette's defense, and drawing the 5th foul on Dwyane Wade was just enough for the win. Details are in this Cracked Sidewalks blog.

The only rematch of the 96-team tournament featured the 2010 national championship. This time heavily favored Duke did not need to wait to see if Gordon Hayward's last second heave would fall - dominating to advance and play 1999 UConn. 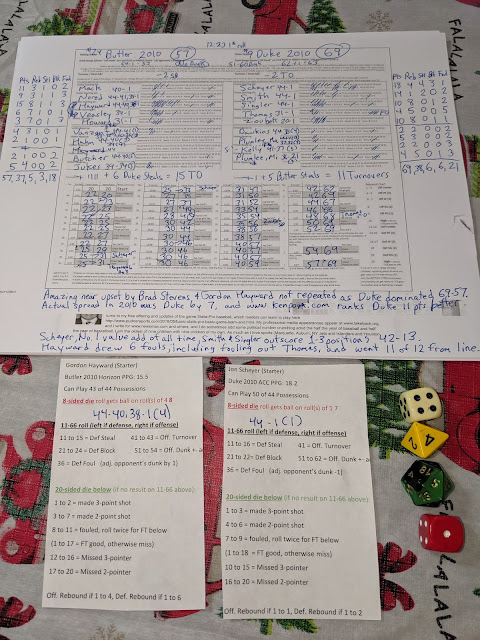 Jarrett Jack wrapped up the East first round with an 18-point, 5 steal game that propelled the Yellow Jackets past Chris Paul and Wake Forest. They play last year's.champs from UVa next. 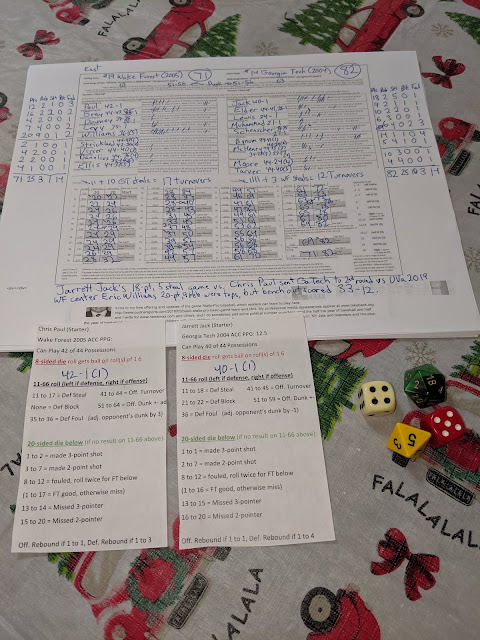 This wraps up 1st round action in the East.
Posted by JohnPudner at 5:43 PM