NEW YORK – Like many organizations we take a break for a Facebook post wishing everyone a Merry Christmas and Happy Holidays in December, and by now almost all of you are used to my once-a-year sports e-mail with suggested March Madness brackets as I depart Madison Square Garden (pictured below) each March. If you care nothing about college basketball and just want to fill out a bracket so an office co-worker will stop bothering you, scroll to the table at the bottom of the email or click here and use the table to fill in your picks. 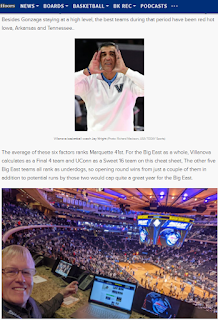 If you want more detail then you can read my CBS Sports 247 story pictured above, look up any team's players at Value Add Basketball, or scroll through the blogs at www.pudnersports.com.

This fun sports stuff is just a hobby to break away from my work-a-holic pace at www.takebackaction.org for a few days each March, so if you want to reach me on more important matters you can still email me at johnp@takebackaction.org, call 404.606.3163 or visit our office that recently moved from Auburn to near Marquette's campus in Milwaukee WI.
If you are still reading :-) then you must at least enjoy watching a few March Madness games so here is the breakdown. First off, the seven categories that are most important to winning a championship indicate several teams have a real shot at the title this year. Here are the championship game results based on each of the systems:
1.    Value Add Sum (see screenshot below); National Champ (6 lines) Gonzaga beats Runner-up (5 lines) Arizona.
2.    Coaches’ history of tourney runs; Duke beats Gonzaga.
3.    Road Warriors (best wins away from home): Texas Tech beats Arizona
4.    Most NBA Talent: Kentucky beats Arizona
5.    Best Experienced Guards: Villanova beats Texas Tech
6.    Hottest Team: Gonzaga beats Iowa
7.    Our Main Bracket (combo of above): Gonzaga beats Villanova
Method 1 – Value Add Sum (Gonzaga beats Arizona for title). This uses the sum of the values of all players. This is similar to the rankings at www.kenpom.com except it adjusts for any players out injured, or for players who have returned to make the team stronger. If “Healthy” appears in the notes by a player at www.valueaddbasketball.com - such as in the screenshot below where Kofi Cockburn makes the Illini even better than their www.kenpom.com rating because he missed some games early but is back strong now. On the downside, the “Inj” by Jacob Grandison indicates the Illini will be 5.23 points worse if he is not recovered from his shoulder injury in time to play this week.

Method 2 - Coaches’ history of tourney runs (Duke beats Gonzaga for title). Coach K’s final year could end like Al McGuire’s career ended at Marquette, with a title. Of all current D1 coaches, 78% have NEVER won a tournament game, much less gone on a run. This does not pass judgment on how good a coach is, just if they have experience making tournament runs. For example, Tommy Lloyd has been a great assistant all the way to the finals before taking over as head coach of Arizona this year, and Big East Coach of the Year Ed Cooley has won only one tournament game in his 10 years at Providence but is one of the best coaches in the country.
Method 3 - Road Warriors (best wins away from home): Texas Tech beats Arizona for title. This measure the teams with the best three wins away from home this season, based on their opponents’ average www.kenpom.com rating. Anyone can win at home - but there are no home games in March Madness.
Method 4 - Most NBA Talent (Kentucky beats Arizona for title): Five players from both Duke and Kentucky should be on NBA teams in a year, but we went with Kentucky in a judgement call if they beat Duke. Based on their NBA-level talent, Arizona wins their half of the bracket.
Method 5 - Best Experienced Guards (Villanova beats Texas Tech for title): If Villanova takes their third title in six years, it will once again be based on having the best experienced guards in the nation, starting with All-American and Big East Player of the Year Collin Gillespie. Our analytics indicate the only point guard in the nation as good as Gillespie is Malachi Smith - the one from Chattanooga not the one from Dayton (who is also very good).
Method 6 - Hottest Team (Gonzaga beats Iowa to title): Iowa’s Keegan Murray is in a 2-way battle for the most valuable player in the country with Kentucky’s Oscar Tshiebwe based on our Value Add calculations, and no player or team is hotter than him and Iowa.
Method 7 -Our Main Bracket (combo of above) – Gonzaga beats Villanova for title. Our main bracket entails averaging all of these factors together but weighting heavier for the first factor – the sum of the Value Add (www.valueaddbasketball.com) rankings of each player on the team who is healthy to play.
Here is the table. Pick the category you want to use and go down that column a list the teams on the number of lines indicated (e.g. if using "Value Add Sum" in the first column, list Gonzaga on 6 lines to make them the national champ, but if using "Coach" in the second column then list them e lines to make them Elite 8, etc. However, have some fun and list your favorite team or a team you thought looked really good on TV.  The better team wins two out of three times in basketball The fun of the bracket is guessing at those one in three times the underdog wins.
Posted by JohnPudner at 12:04 PM