If Key and Young Out for Ohio State, Michigan Becomes Favorite (and 30 other teams missing key players)

At www.kenpom.com, Wyoming is favored 64-60 in a huge game with Fresno State. However, Hunter Maldanado is listed as questionable, and if he does not play www.valueaddbasketball.com calculates that costs Wyoming 9 points - changing the projections from a 4-point win to a 5-point loss.

The costs of a player missing the game is calculated as follows at www.valueaddbasketball.com. If the missing player is not listed as one of the seven most valuable players on the team, then the impact is very small. However, if the player is one of the team's seven best, then you take his Value Add and subtract the Value Add of the 8th best player on the team. In this case Maldonado ranks near All-American level at a 9.44 Value Add and Wyoming's 8th best player is worth only 0.08 (they are not a deep team) so him being missing costs the team 9.36.

Kenny Foster is also out, but he has been out all but a few games, so at this point they've mainly played without him anyway - so the current ratings is almost exactly correct.

The team hurt the second most by missing layers would be Ohio State, if Kyle Young and Zed Key are gone. If they are both out their +4 points projected at www.kenpom.com drops to a projected -4.0 for a loss.

The following are the 30 teams most hurt by current injuries. As you can see, some just appear to be minor and making a player questionable for their next game, but others are season long injuries that will alter a team's ability to win games in March Madness. 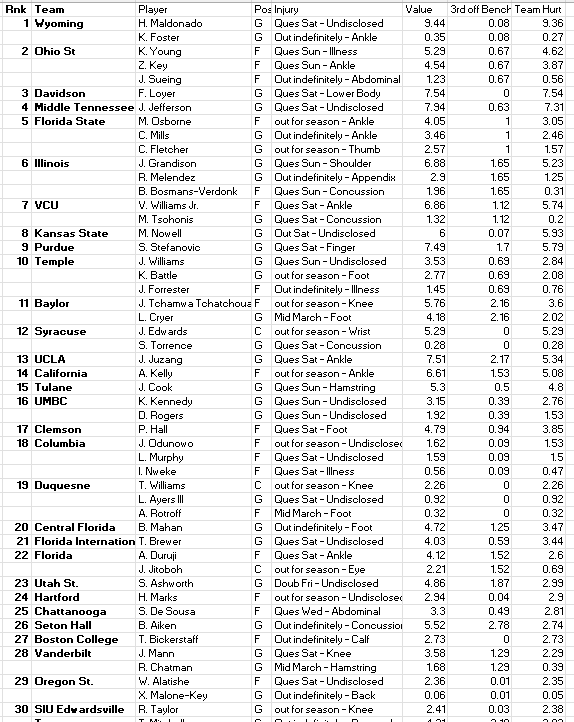 Here is the same table in another format.
Posted by JohnPudner at 1:14 AM