This is a condensed post with a paragraph on every game of our 2020 NIT that might have been using player cards and the free Value Add Basketball Game. The more detailed post includes score sheets and more detail on each game as well as the already concluded NCAA 2020 and all-time tournaments.
In this post we summarize the 1st Round of our simulated NIT tournament starting with the top 5 individual performances in points, rebounds, steals and blocked shots. We then give the breakdown of the top offensive and defensive games by teams, and finally list games in the order of the bracket, and we seed 1- through 32- rather than break down into four 1-8 seeds. At the bottom we include the bracket itself.
Top 5 game stats in NIT opening round.
Top points; Goodwin (St. Louis) 29, Gamdia-Rosa (N.Florida) 28, Rayman (Colgate) 27, Figueroa (St. John's) 23, Lyons (Furman ) 23, Carr (Minnesota) 23.
Top Rebounds; Santos-Silva (VCU) 15, Oturu (Minnesota) 14, Mooney (ND) 13, Fulkerson (Tennessee) 13, French (St. Louis) 12, Holland (Radford) 12.
Top Steals; Champagnie (St. John's ) 6, Likekel (OK St.) 5, Hayes (Merrimack) 5, Jenkins (VCU) 5, Lomax (Memphis ) 5, Russell (Rhode Island) 5.
Top Blocks; Sidibe (Syracuse) 6, Oturu (Minnesota) 5, Dentlinger (South Dakota State) 5, Langevine (Rhode Island) 5, Haarms (Purdue ) 4, da Silva (Stanford ) 4, Pons (Tennessee) 4.
Biggest Margin - Purdue +21 vs Merrimack 74-53, runner-up VCU and Mississippi State +15 each, while three games went into overtime.
Best Offensive and Defensive Team Performances
Through the 16 1st Round NIT games using the Value Add Basketball game, teams averaged 71.2 possessions, whereas during the actual entire 2020 season teams average a possession less per game at 70.0. However, this is likely because three of the 16 Value Add games went into overtime.
In the 16 board games the average team score 1.01 points per possession, which is just below the 1.02 per possession from the entire real 2020 season, so the game seems to be just about right on target on both through the small sample of 16 games.
The following chart gives each team's points scored in their opening round game, divided by their possession, in order to rank them from the best offensive efficiency (Texas scoring 1.20 points per trip to edge Colgate) down to the best defensive effort (Purdue averaged allowing just 0.76 points per possession against Merrimack).

Xavier 79, North Florida 77. North Florida's Ivan Gandia-Rosa, who just missed Atlantic Sun Value Add Player of the year, came within seconds of upsetting 1-seed Xavier. Having already drawn 5 fouls on Paul Scrugg's, he hit 2 free throws finish with 28 points and lead 77-76 with 16 seconds to play. Quintin Gooden missed a potential game-winner for Xavier, but Tyrique Jones grabbed the offensive rebound (game-high 9), fed the ball to Naji Marshall who scored the game-winner despite being fouled and hit the free throw to finish with a team-high 15 and deliver the 79-77 win.

St. John's 86, UConn 83 (OT): The fact that St. John's even forced a overtime was amazing, since UConn's Christian Vital (19 points, 5 rebounds, 3 steals) dominated.  However, St. John's then did one they do best, turning UConn over down the stretch. While UConn's 6-foot-11 Carlton dominating (12 points and 12 rebounds) most of the game, his shorter St. John's counterpart Champagnie had 6 steals en route to a team 16-8 edge in steals with several in the last 5 minutes. Figueroa hit two 3-pointers en route to his game high 23 points and Williams scored with 16 seconds left to close the amazing 24-14 run in the final 5 minutes to send the game into overtime 74-74.

Xavier vs. St. John's for pod.

VCU 76, Stanford 61: The first big upset of the 2020 NIT started at Stanford with a 13-0 blitz from VCU that made it 33-20 out of the gate.  In a match-up of star shooting guards, VCU's De'Riante Jenkins stole the ball on two of the first four trips to lead the fast start. The other match-up of big stars featred the two centers with similar last names, as VCU's Marcus Santos-Silva (9 points, 15 rebounds) dominated the boards while Stanford's Oscar da Silva (10 points, 7 rebounds) was strong with four blocked shots. However, the surprise games by Douglas (9 points, 3 rebounds in limited time) and small forward Issac Vann (19 points, 7 rebounds).

Texas 84, Colgate 82: Texas coach Shaka Smart will only host his former team VCU in the 2nd round because his star Jericho Sims took over in the final minutes including the game-winner buzzer beater. The 44 possessions we play included 13 lead changes and 8 ties. Sims scored with 3:30 left to give Texas a 71-70 lead, then to tie it 73-73 on the next trip, then grabbed an offensive rebound and fed Courtney Ramsey to make it 75-73, then scored again for 77-75 lead for 6 points, and offensive rebound and assist in four trips. When Will Raymond capped his 27-point game with a game-tying 3-pointer to make it 82-82, before Sims beat the buzzer for the 84-82 win.

South Dakota State 85, St. Louis 83 (OT). The Summit League's South Dakota State overcame a 14-point deficit, 24 fouls including both forwards  fouling out and a monster performance by Jordan Goodwin (29 points, 10 rebounds) to stun St. Louis in overtime. Center Matt Dentlinger scored only 4 points but blocked his 5th shot to prevent a game-winner at the buzzer to force overtime. Douglas Wilson then scored 8 of his 21 points in overtime before fouling out as they scored 17 in overtime for the win.

Alabama 77, Notre Dame 68. Alabama overcame 18 turnovers and a bit of a home job at South Bend with a barrage of 3-pointers to advance. On roughly 100 rolls of the 4 dice per game (44 possessions per team plus some offensive rebounds and extra possessions for steals-fast breaks or fouls in the last 9 possessions) there is a one in 36 chance of a bad call favoring the home team that can slip a roll of 36 (foul) and 66 (non foul). The refs missed four Notre Dame fouls, one more bad call than average. However, Bama hit four 3-pointers in their first 6 possessions to take a 32-20 lead and they never trailed behind double digits from their trio of stars in PG Kira Lewis (16 points), SG Jaden Shacekford (18) and John Petty (12).

Rhode Island 79, Radford 69. In a match-up of 2 of the best point guards in the country, Radford's Carlick Jones (21 points, 9 fouls drawn) gave Fatts Russell (17 points, 5 steals) and his Rhode Island teammates all they could handle. Radford led 50-49 with 10:48 to play, however Rhode Island's mismatch edge at the other 4 positions - as the shooting guard (Jeff Dowton 18 points, 5 rebounds, 2 steals) and small forward (21 points, 9 rebounds) helped them pull away for the double digit win.
Mississippi St. 69, Tulsa 54. Reggie Perry, a www.valueaddbasketball.com SEC All-Star, led a 7-man rotation with 16 points and 10 rebounds. Tulsa's balanced attack with four players in the top 10 percent of all players actually won the turnover battle (14-17) and drew many more fouls (11-19) but simply could not hit their shots in this night - falling behind by 20 on a Reggie Perry dunk with 9:31 to play, 35-55, and never threatening.

Purdue 74, Merrimack 53: After 2 NIT games that came down to final shots, Purdue dominated as expected behind 7-foot-3 Matt Haarms (12 pts, 9 rebounds, 4 blocks) and the sharp-shooting of Sasha Stefanovic (22 points). The game was not within 10 points after Stefanovic hit a 3-pointer to make it 44-34 with 16:51 to play. Jurvaris (16 points, 5 steals) led Merrimack, the biggest surprise team of their first season moving up from Division II to Division I and winning the NEC after being picked to finish 11th of 11 teams.

Syracuse 73, Georgetown 66: John Thompson's stunning upset in the final game played Syracuse in Syracuse's Manley Field House is so famous that if you start to type Manley Field House in google it will add the rest of Thompson's quote "Manley Field House is Officially Closed." Every game Georgetown trip to the currrent Carrier Dome brings back that memory, but on this game the strength of Syracuse forwards - superstar Elijah Hughes (12 points, 8 rebounds) and Marek Dolezaj (15, 8) dominated their Hoya rivals 27-8 in points and 16-11 in rebounds. With the promising backcourt of James Akinjo and Mac McClung play limited minutes each game based on their injury plagued season the backcourt did not have enough as Syracuse point guard Joseph Girard scored 20 points. Though it was close the whole way, Syracuse never trailed.

Wright St. 72, Memphis 62. Memphis started the season with potentially the top player in the country in Wiseman and national title hopes, but ended with a 42-point loss to Cincinnati that would have left then in the NIT. Switching to our simulated NIT, it continued downhill with a 1st round NIT loss as the offense could not click despite 13 steals leading to many fast break chances. The Horizon League's Wright State continued Butler's tradition of upsets, dominating underneath with power forward Bill Wampler (18 points, 7 resbounds) and center Loudon Love (15,7) holding their two counterparts to a total of 15 and 11. Love is one of the few players who gets the ball on 3 of 8 die rolls when on the court, a 5,7 or 8.

Tennessee 62, South Carolina 58. During the real season included two defensive slugfests with the home teams winning - Tennessee 56-55, then South Carolina won 63-61. At the end of the season www.kenpom.com ranked Tennessee 68th and South Carolina 69th and overall we gave Tennessee the home court advantage based on an NIT 14-seed vs. a 19-seed for South Carolina in our Value Add NIT rematch. Once again, the home team won a defensive battle with Tennessee taking the game 62-58. Tournaments do not actually allow conference foes to meet in opening rounds but we simply seeded 1 to 32 and went straight by the match-ups. In the defensive battle, the Vols dominated inside for a 44-37 rebound edge that included Yves Pons (12 points, 8 rebounds, 4 blocks) and John Fulkerson (8 points, 13 rebounds).


Arkansas 75,Murray State 70. Murray State's Anthony Smith drew 9 fouls including fouling out 3-point specialist Isaiah Joe to make it 53-46 Murray State. The Racers looked ready to follow-up on their real 1st round NCAA upset of Marquette. However last year Ja Morant was the best player in the court, and as good as Murray State's Tevin Brown (10 points, 7 rebounds), Arkansas' Jimmy Whitt (16 points, 8 rebounds, 2 steals) was top www.valueaddbasketball.com player on the court and he took over in the final 2 minutes to avoid the upset. Whitt had 2 steals and dunk to lead a 6-0 run to end the game with the 75-70 win.

6-N. Iowa vs. 27-Louisiana Tech --- 11-Minnesota vs. 22-Furman
Northern Iowa 66, Louisiana Tech 61. Northern Iowa never trailed, but when La Tech's DaQuan Bracket scored to tie it 61-61 with 1:30 to play it was up to Isaiah Brown to score his first points of the game. Brown drew a foul going up for a 3-pointer and was fouled, hitting 2 of 3 free throws for the 63-61 lead. AJ Green hit a 3-pointer on Northern Iowa's next trip to wrap up his game-high 17 point game and the 66-61 win.  Northern Iowa did get a bit of a home job with four missed calls going their way - one more than the average three more calls in a game.
Minnesota 75, Furman 66. Point guards Jordan Lyons (Furman) and Marcus Carr (Minnesota) tied for the 4th best scoring games of the first round (23 each) to keep it close, until Minnesota www.valueaddbasketball.com All-American Daniel
Oturu took over the final 12 minutes. Oturu's 5 blocked shots were the second best total of the opening round, and one of them with 11:22 to go kept Minnesota within 48-46, and then he dunked on consecutive trips to make it 50-48. Oturu also grabbed 14 rebounds, the second most of anyone in the opening round, and added 18 points for the most dominant overall performance of the 16 opening round games.
Paragraph summary posted when each game ends, and photo of score sheet a starters posted here. 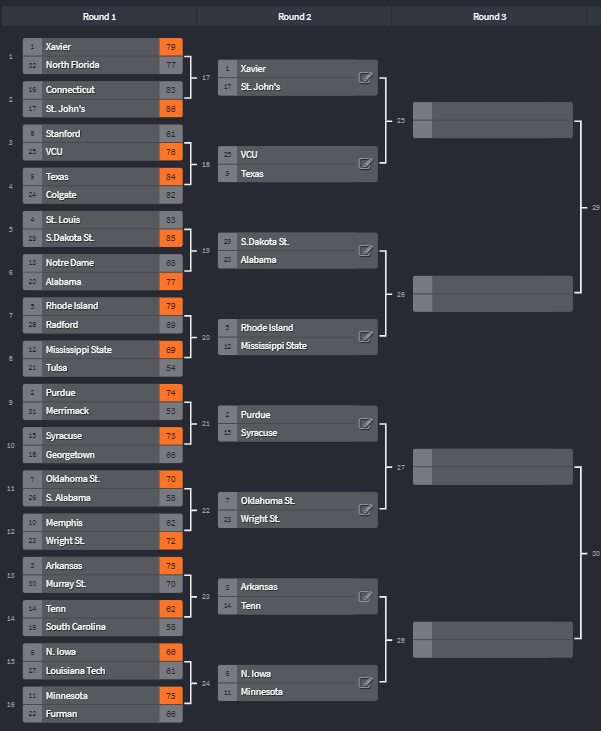 Posted by JohnPudner at 8:46 AM