The AL Commissioner updated Statis-Pro standings July 20 before taking a break to play off the 2020 NIT tournament that never happened. Meanwhile the NL Commissioner's update below covers their new standings and the mid season awards. The first cut included relegating five teams in each league, though the San Diego Padres have played great baseball since being relegated.

Then the remaining teams were broken into a new 5-team NL West, NL East, AL East and AL West. Our Statis-Pro league will therefore have two divisional winners in each league which get a bye, and with the next four teams in each league named as wild cards who play in the opening round.

We will play for about one more month, and as of today the playoff bracket would look like this. However the Angels are most likely to be replaced by the Chicago White Sox, now that Ohtani is out for the season as a pitcher. We allow injured players to play, unless it was a season ending injury that would have made them miss the rest of the year (we do play the cards of players who skipped due to Covid). 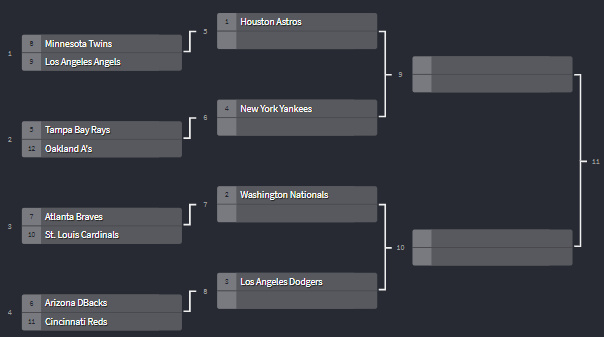 We are into the dog days of August, so it is time to start talking playoff races in the Statis-Pro NL. Here is the

Notes for the updated standings:

In the “West”, the Dodgers 5-game winning streak helps them lead the way.  But the pesky Diamondbacks won’t go away winning 7-straight.

The final six games will be interesting (including two head-to-head) to determine the division winner and first round bye.

In the “East” the Nationals are starting to separate having won 7 of 9.  The Mets 7-game losing streak is only topped by the Phillies massive 10-game

slide that all but eliminates them from the playoff chase.

As for the wildcard race, the Cardinals are holding the final spot, but the Cubs [1 game back] and Brewers [2 back] are still in it.  The “West” could take

Los Angeles is number one in runs scored and fewest runs allowed.

As a result, they also carry the best run differential at [+46].

Posted by JohnPudner at 4:06 PM