Latest Result: Bama's great trio of guards 2 steals each, combine for 50 to rally past SD State. Top seed Xavier produced the best offensive performance of the tournament - 83 points in 68 possessions (1.22 points trip).
Even casual sports fans interested in the results of the Value Add Basketball Game playoff of the cancelled 2020 March Madness (Creighton defeated Duke in the title game) and our all-time March Madness (Bill Walton's UCLA beat Michael Jordan's UNC) may have little interest in our replay of the cancelled 2020 NIT tournament - sometimes derided as the tournament to decide the 69th best team.
However, true fans love the NIT to see which teams that just had some bad luck or injuries prove in the NIT they were better than MANY NCAA teams. Based on www.kenpom.com, the last two NIT champions were the 25th best team in the country (Shaka Smart's 2019 Texas Longhorns) and the 19th best team in the country (Pat Chamber's Penn State).
Offensive Fouls. This 2020 NIT also is the first use of two important rules in the game. When a roll of a 43 or 46 is a turnover in the game, it is now also an offensive foul (vs. another dead ball turnover such as losing the ball out of bounds). This means a dead ball turnover occurs on an offensive foul 28% of the time - the actual average - for all player cards with a turnover range of between 41-43 and 41-46.
Home Advantage. Because the March Madness NCAA games were all played on a neutral site, this is also the first time we have used the home advantage in the game - in which the home team has the option of changing a roll of a 36 to 66 on defense (usually resulting in the referee missing a foul that should have been called on the home team) or on offense changing a roll of 66 to 36 (resulting in a bad call against the defense).  This results in about three more calls going the home team's  way then the visitor's way, which averages about a three point home advantage.

The 16 1st round games appear here, with the top performances at the bottom of this blog. Next we will post the eight 2nd round NIT games - including score sheets and a paragraph summary as each game is completed.

Tennessee's Olivier Nkamhoua grabbed two offensive rebounds on the first trip to give Tennessee the first lead, setting the tone for a 40-24 dominance of the boards. The Vols disrupted Arkansas offense as well with 8 blocked shots to score the upset road win. While Arkansas always the home team and higher seed based projections for NIT bids, Tennessee likewise dominated the actual regular season game - winning 82-61 at home. The NIT Elite 8 is now set. 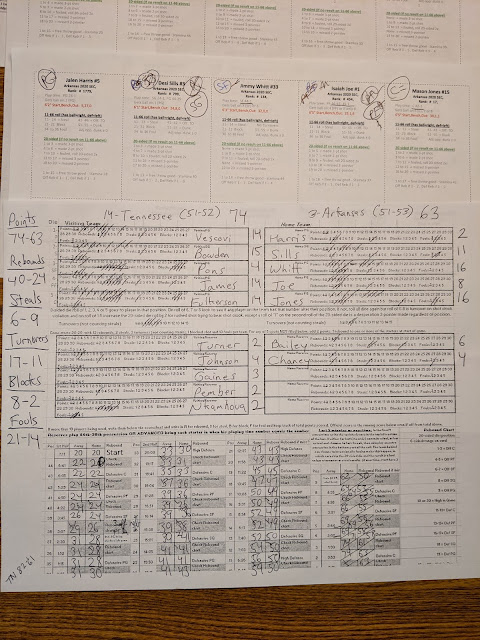 In a de ja vu game for me, I played two teams I watched play in Madison Square Garden the night coronavirus canceled the NBA season. St. John's LJ Figueroa scored 22 that night, and scored 24 in our board game. However, Value Add All-Big East Tyrique Jones (see conference ratings below Scoresheet) fought for a big rebound to hold a 79-77 lead with 1:30 to play, then scored on the next two trips to make it 81-77 en route to a 83-79 win. Xavier won both regular season actual games, by scores of 77-74 and 75-67, but the offense cranked up in the board game for 83 points in 68 possessions for the best offensive efficiency of the tournament to date at 1.22 points per possessions. 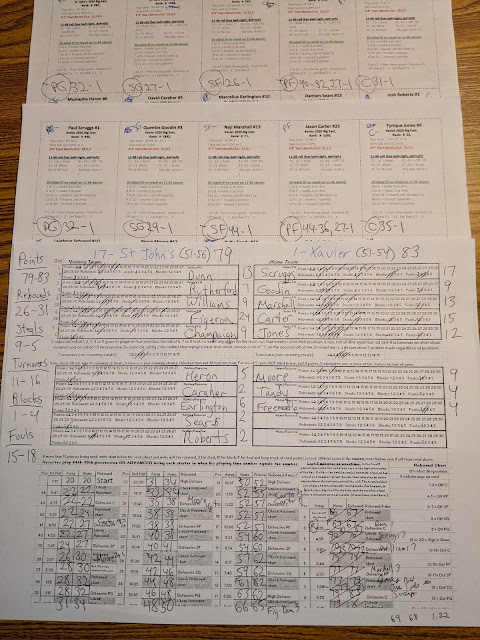 In what looked like it might be the highest scoring  match-up of the NIT (dunk ranges of 51-56 and 51-63) Alabama's great trio of guards exploded late. Trailing 35-45 due to due to South Dakota's star center Matt Dentlinger (19 points, 9 rebounds), Bama center Alex Reese stepped out for a 4-point play, hitting a 3-pointer and being fouled. The three guards then took over with almost identical games, as Kira Lewis scored 17 with 2 steals, and Jaden Shackelford (16,2) and John Petty (17,2) almost matched it. 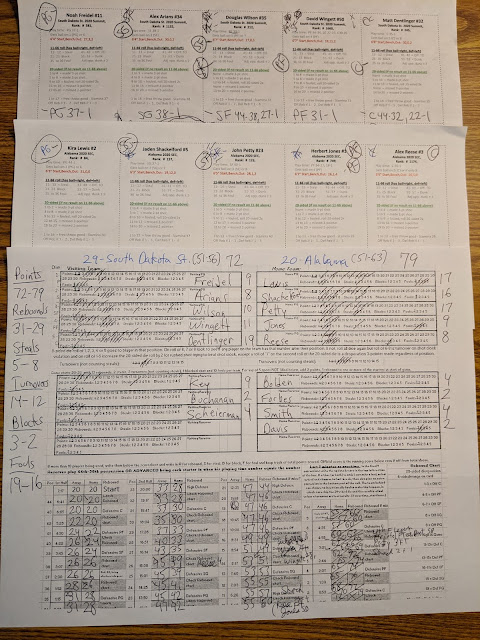 Based on Value Add, Lewis was 2nd team SEC (top 10 in conference), Petty was 3rd team and Shackelford 4th team based on points above replacement they were worth to their team.

With Mississippi State leading 63-60 with 28 seconds to play, Fatts Russell came up with his 5th steal and hit a 3-pointer whole being fouled, completing the 4-point play for a 64-63 win. Rhode Island center Cyril Langevine grabbed 15 rebounds. 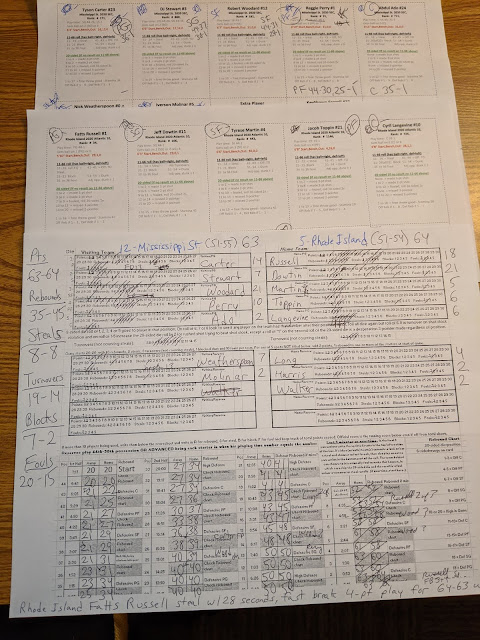 Russell was All-A10 according to Value Add. 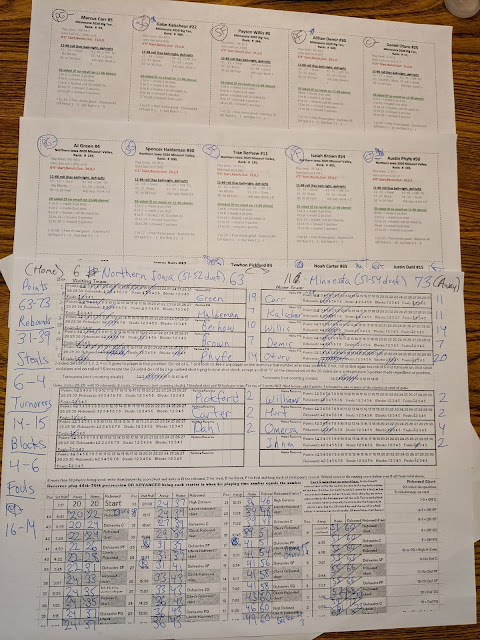 Here are the top MVC players in the Value Add rankings.

Butler is no longer in the Horizon League, but Wright State continued the League's tradition of tournament upsets with a 78-75 upset of Oklahoma State. Wright State already won at Memphis 72-62 in the opening round - giving them two of only six upsets in the 19 NIT games so far - that 32 percent is the same percentage of upsets for the actual 2019 NIT tournament. After the game was tied 55-55 with 6:45 to play in the game, the best rebounder on the court (Loudon Love) three times grabbed offensive rebounds to help Wright State win the battle for rebounds 36-29 and keep possessions alive and lead to scores. One of those offensive rebounds was passed back out to Bill Wampler, who hit a 3-pointer for a team-high 21 points. His counterpart Cameron McGriff, the Oklahoma State power forward, had a great back-and-forth with a game-high 22 points in the loss. Wright State average 1.13 points per trip down the court in both, giving them two of the top five offensive performances of the NIT. 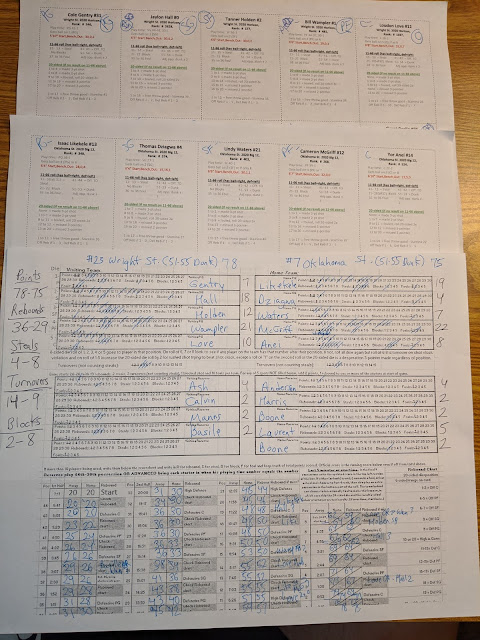 It looked bleak for Shaka Smart's Texas Longhorns with 1:52 to go in the 1st half against his old team - the VCU Rams. Star PG Coleman was called for charging for his fourth foul with Texas trailing 32-26. However, Coleman never was called for his 5th foul and scored 21 to register a 70-63 win the the second round of the Value Add Basketball NIT. Texas won the last actual NIT title in 2019. 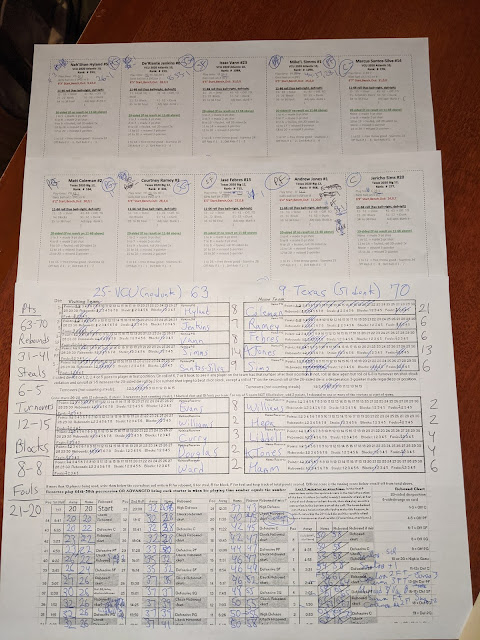 After Purdue breezed through the first round against Merrimack, Buddy Boeheim's five 3-pointers kept Syracuse alive until the final possession. With Purdue leading 71-68, they did not let Boeheim get off a game-tying 3 - fouling him. He made the first free throw and after he intentionally missed the second Trevion Williams grabbed his 12th rebound to end the game 71-69. Sasha Stefanovic's three 3-pointers down the stretch helped Purdue advance. Purdue started in the top 10 in 2020 coming off their narrow Elite 8 loss to eventual 2019 Champ UVa, but had trouble holding leads in the extremely tough Big Ten - one of the best conferences in years. 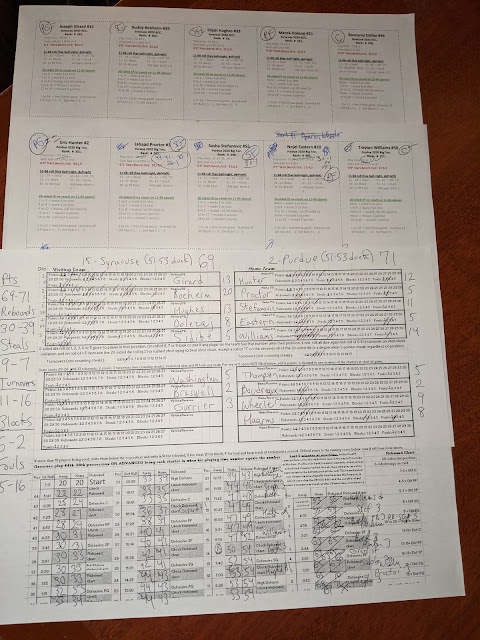 3-Arkansas Vs. 14-Tennessee
1-Xavier vs. 17-St. John's
With the above two conference match-ups, the Big 12, Big Ten, Big East, Horizon and SEC will all have on team the the NIT Elite 8, with the three games below determining the rest of the conference background. 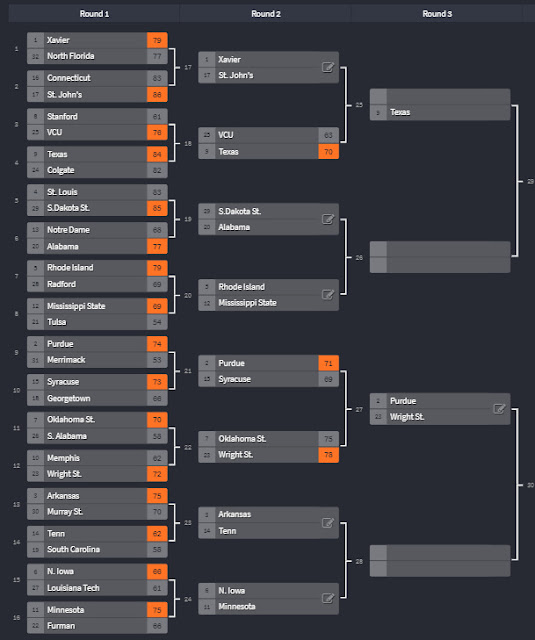