Both Chicago teams - the Cubs and White Sox - grabbed the 6th and final playoff spots in their leagues in the final Series in our Statis-pro baseball season that started way before the real season started.

The AL playoff matchups are set:

The following is the grid of each of the 10 teams who advanced in the AL overall and in each 6-game series.

Next the AL picture (while the NL games each count as one game, while the AL plays each game counts as three games. The winner gets credit for winning 2 of 3 games unless they led by at least 5 runs at the end of 8 innings, in which case they get credit for a 3-0 sweep. The chance of winning a game by 5 or sweeping a series 3-0 are both 14%.
Brewers 3, Yankees 2 - playoff match-ups set
Yelich started the 8th with a double, then Urshela threw away a ground ball that led to a rare blown save for the Yankees. The loss clinched the AL East and No. 1 seed for the Rays, who will get the winner of the Twins-A's playoff series (A's final series will determine which is the 4-seed and which is the 5-seed, but regardless they play each other).
Despite still having the second best record ahead of the AL West champion Astros, the Yankees go into the playoffs as the top wildcard and 3-seed, playing the 6-seed White Sox with the winner getting the Astros.
Red Sox 11, Astros 5 (no sweep since 5-5 after 8, so ChiSox clinch playoffs
The Red Sox 1 in 10,000 chance of finishing 12-0 to make the playoffs is officially over and the ChiSox claim the last spot, but only in perhaps the worse clinching game ever. The Astros needed only to not be down by 5 runs after 8 innings to assure they would not be swept 3 games to none and both clinch the AL East and clinch the final spot for the ChiSox.
Against the last place Red Sox, the Astros had three players ejected, one injured running into a wall (Altuve) and their ace reliever gave up 5 runs in the 9th, luckily an inning to late to give the Red Sox credit for the sweep they needed to stay mathematically alive and give the A's a chance to catch the Astros. 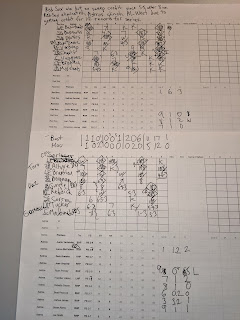 Phillies 13-4 (no sweep) and 6-2 to eliminate Angels
Baring the last place Red Sox pulling off an unfathomable 12-0 finish to the season, four home runs by the Phillies Jay Bruce just sent the White Sox to the playoffs. We placed the quick card produced for the Phils 3rd baseman Bohm based on his on-base percentage.
McCutchen's 2-run triple in the second made it 3-0 Phillies, but the Angels cut it back to 3-2 and later to 5-4 on an Ohtani HR. However the Phils speed paid off as Quinn and Segaura took extra bases on the base paths and then both scored on Hoskins single to make it 7-4. The 13-4 win was not a sweep because it was just 8-4 after 8 innings, meaning the Angles did get credit for going 1-2.
Going into the final game, the Angels were still alive but only if they won after leading by at least 5 runs at the end of the 8th inning, which seemed possible since starter Velasquez is a PB 2-5. However, he allowed only 3 hits and 2 runs in 5.1 innings, and the bullpen made it hold up as Bruce hit 3 of his 4 homers in the second game.
The White Sox grab the 6th and final playoff spot unless the Red Sox pull off their last 4 games after leading by at least 5 runs at the end of the 8th inning each time to get credit for four 3-0 series sweeps and a 12-0 mark. If they did that they would finish with the same 49-47 record and win the tie breaker due to having a one game better record against the other 9 AL qualifiers. 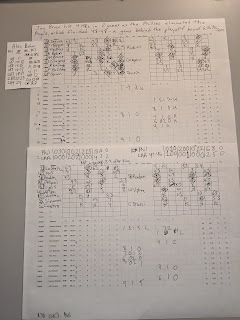 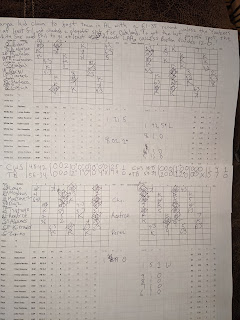 Twins win 4-2 to eliminate Jays, then win 5-4 to clinch playoff spot
Rosario greeted Jays closer Giles with a walk off HR to send the Twins to a playoff. 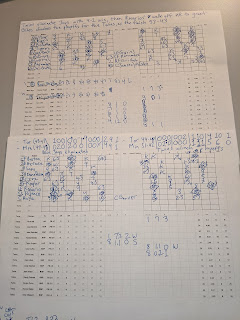 Jays win 5-4 and sweep 5-0 Indians
Toronto basically eliminated Cleveland. The 2 extra bats and 2 starting pitchers probably arrived too late to make the Top 6 AL teams for the Statis-pro playoffs, but if they were to go 6-0 vs. the Twins they would likely make the playoffs. 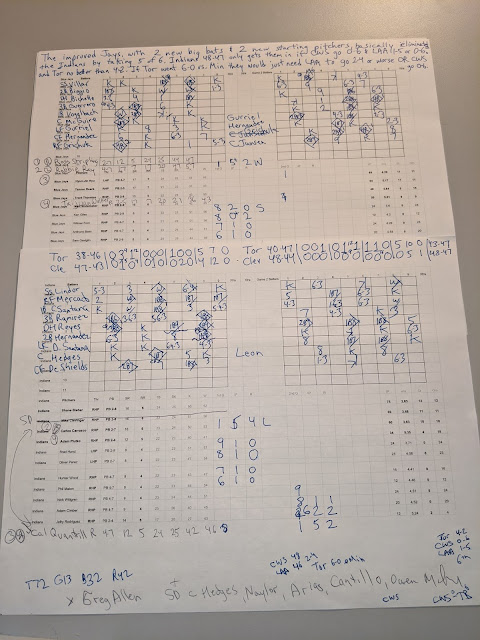 The Astros hold the tie-breaker vs. the A's die to winning the series 4 games to 2, so they will grab the bye for the AL West unless they go 0-6 against the Red Sox (lose both games after trailing by at least 5 at the end of the 8th inning) and Oakland goes 6-0 in the same manner in their final two game series against the Cubs.

The Yankees hold the tie-breaker vs. the Rays, but both are 56-34, so if the Rays do just one game better in their final series against the White Sox to claim the bye.

With the Rays or Yankees falling to the top wild card spot, there are basically 5 teams fighting for the final three playoff spots and they are each one game apart. The A's (50-40), Twins (49-41), White Sox (48-42 and final team in if season ended today), Indians (47-43) and Angels (46-44). If two teams are tied then the head-to-head is the tie-breaker, and if the teams went 3-3 against each other then the next tie-breaker is the record in the 54 games against the other 9 AL qualifiers (the Yankees finished with the best record against the other nine at 30-24, but 4 teams still have a chance to surpass them in their final 6 games).