After shifting to basketball for a month to play off the 2020 NIT, we returned to our baseball season.

Note that if a key player was subtracted we put a minus sign (e.g. -Vargas for Arizona) and take that Statis-Pro card off their team, or added (e.g. +Vargas for Minnesota) then the card was added to their team for the game. We move player cards if a player is lost for the season due to injury (we are leaving them on the team if they just left for Covid since this is our "what if there was no Covid" season), or if a key player is traded.

The Yankees won 13-2 to catch the Astros right after they lost Alvarez for the season, and in the NL East the Braves hope to catch the Nats after they lost Strasburg. We use player cards unless the player is injured for the year (we keep players who choose not to play because of covid).

The Oakland A's have not been as dominant in Statis-Pro as they have been on the field this season, but they rallied twice past a tough Chicago White Sox team to most into the 2nd wild card spot. The score sheet and updated standings are below.

To play Statis-pro baseball just click on the score sheet for each of the 30 teams, which now includes cards for all 30 teams based on Zips projections. See the (free game here). Search "new games" to find where newest game score sheets start.

This blog includes the games we have played. In our season five teams from each league were relegated, while the 10 AL teams below and 10 NL teams being played separately continue to play for four division Championship byes and eight wild card spots. The NL plans to play 30 games, while the AL plans to play 32 but counts each game as 3-games (sweep if 5+ run lead after 8 innings) so will show 96 games.
Relegated teams (continue to play AL but not eligible for playoffs): PIT 16-14 53%, SD 17-19 47% (+ Alonso), Tex 11-13 46%, Col 8-10 44% (-Oberg), Balt 14-28 33% (+Lopez), Det 10-20 33%, KC 10-20, 33% (-J.Lopez -Montgomery -Sparkman), Sea  9-21 30%, SF 7-17 29% (-Hamilton), Mia 6-18 25%. (+Hoyt)The grid of all series are in this google sheet. Bold opponents indicates games against a relegated (therefore easier opponent). After all series above, each team will have played two games against the other 9 teams in these AL standings, two NL qualifiers, and 5 relegated teams.
Twins 8-4, then Yankees 6-5 in 10 innings
Yankees went up 3-0 off a Judge HR on their 3rd batter of the game before the Twins roared back with 14 hits to win 8-4. Incredible defense on both sides kept this from being a slugfest. For the Twins Donaldson turned a double play on a grounder that would have been an error for most 3rd baseman, and reliever Wisler ended the game with a clutch defense double play.  For the Yankees both Judge and Hicks caught z-Play drives that would have been extra bases against most, and Ursela turned a clutch DP at 3rd. In the nightcap the Twins rallied again to chase PB2-9 Cole with 4 runs in 5 innings plus. They then scored on PB 2-9 Britton to tie it again in the 8th and force extra innings, but a 3rd PB 2-9 Chapman slammed the door with 5 Ks in the 9th and 10th. With an OBR A pinch runner placed on 2nd base to start the bottom of the 10th, Donaldson could not come up with a clutch defensive play on a  Gardner smash down the third base line to give the Yankees the split.
A's win 8-6, but the Indians sweep 7-0
Indians huge 2nd game sweep means the final playoff spot likely comes down to three teams. ChiSox 48-42 plays 6 vs TB, Cleveland 47-43 plays 6 v Toronto, LAA 46-44 plays 6 v Phil. 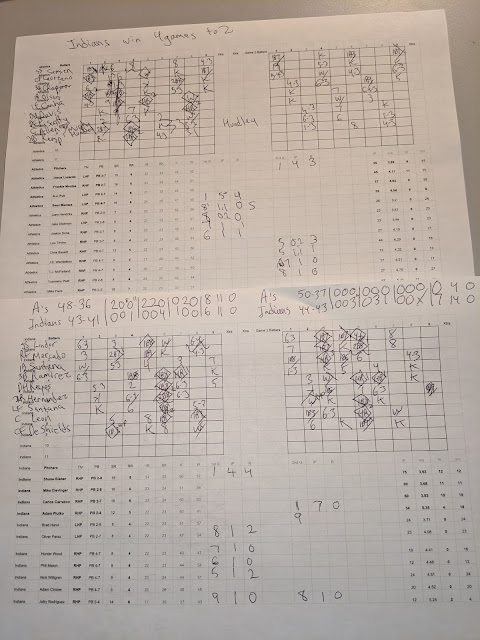 White Sox stun Astros 6-2 and 5-2
The ChiSox seemed to be in the toughest spot with only games left against the Astros and Ray's and a 1 game lead over the Angels and Indians for the last playoff spot. However, their suspect pitching shocked the Astros. Giolito (who in real life threw a no hitter) threw and 8-inning, 2 hitter in the first game. After spotting Verlander a 2-0 lead in the nightcap, the ChiSox chased Verlander in the fifth with a 2-2 tie. After 8 innings, the ace relievers squared off with Aaron Bummer vs. Roberto Osuna. In our games short relievers can only pitch to 4 batters or finish a complete inning at full strength unless the game goes extra innings. Bummer's RR 4 held up for three innings as he set down all 9 he faced with 6 strikeouts, a pop up to catcher and grounders to second and first base. Osuna allowed a single to start the 11th which ran out his RR endurance and left men on the corners die to extra innings starting with a man on second. Jimenez then greeted Devinski with a triple, his fourth hit if the day, and later scored for the 5-2 win to put the White Sox two games up in the Indians and Angels. 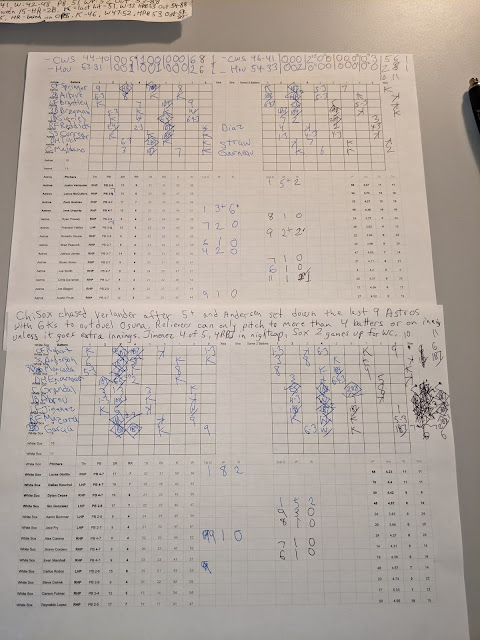 Angels win 4-2, then Rays 4-0
The Rays dominated the Angels with a 30-15 edge in baserunners, but the Angels clung to a split to keep within a game of the playoffs. The Rays stranded 12 runners without scoring in the first 6 innings of the first game before falling 4-2. Then with Blake Snell only allowing 3 baserunners in 8 shutout innings, the Rays could never push across a 5th run for a 2nd game sweep. 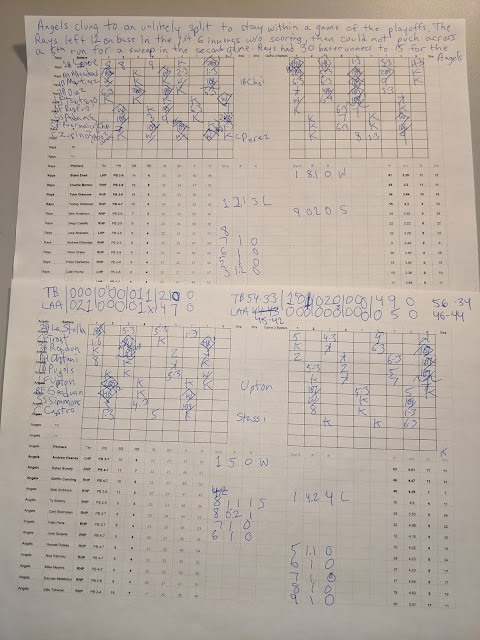 All AL teams have 2 series, 12 games, to play before the playoffs.
Yankees own tie-breaker over Rays since they won season series 4-2.
Rays sweep 9-4 then win 3-2 in 11 innings over Cards to catch Yankees
The Rays dominated the Cards in the 1st game to get credit for a 3-0 sweep, then used their deep pen to outlast the Cards to tie for the best record I'm the AL 53-31.
Blue Jays win 8-5, then blow 14-4 lead in Astros 16-15 win
Former Seattle cleanup hitter Dan Vogelbach added yet another bat to help the Blue Jays pound out 23 runs - but after they needed their top 5 relievers to secure the 8-5 win they blew a 19-run lead in the second game. 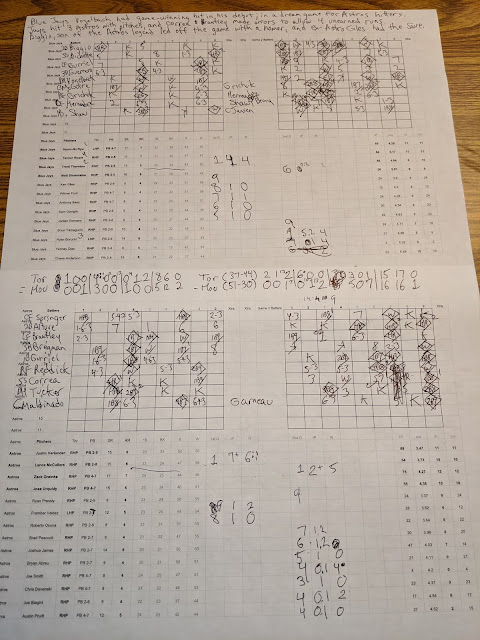 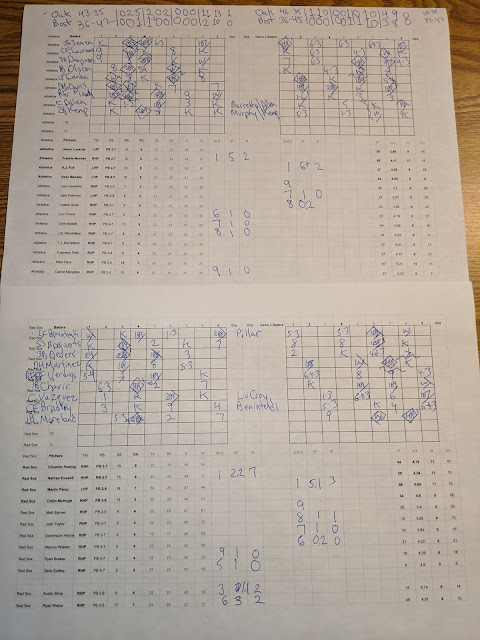 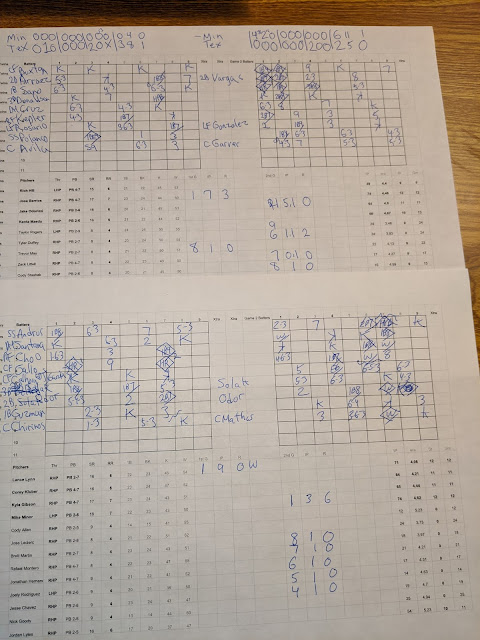 Ildemaro Vargas had hits and runs his first two at bats since coming over from the DBacks but Twins missed a chance to move up in their last series against a relegated team with a split.
Angels win 4-2, then Yankees sweep 13-2 to catch Astros
After a slow start, the Yankees are now at the top of the AL. 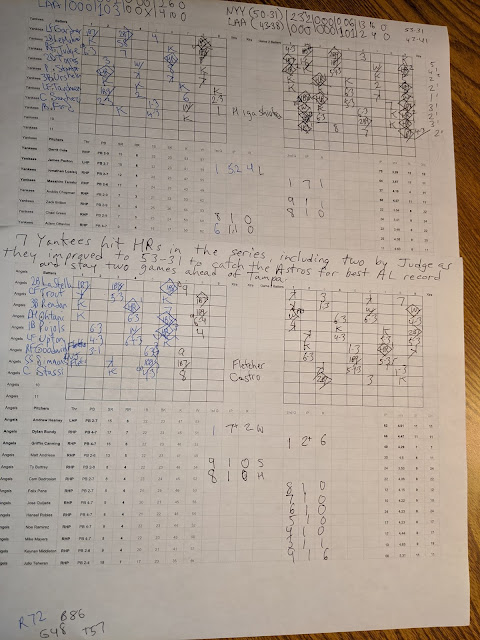 Astros (7-0) and Indians (11-0) take turns crushing each other
Verlander and Carrasco both threw shutouts. 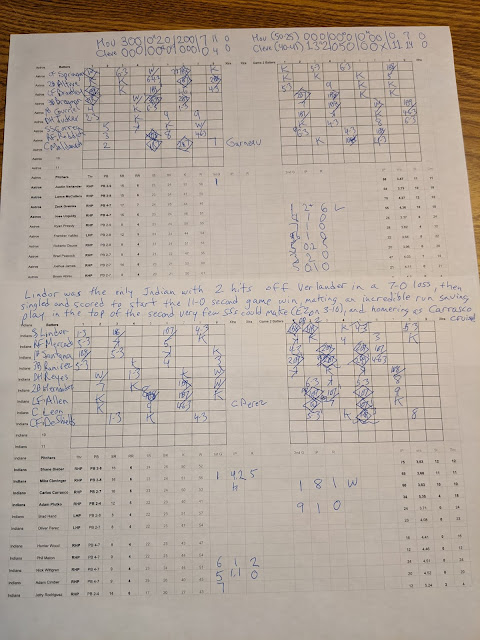 Oakland Wins 7-5 and 5-4 against Chicago White Sox
Oakland has not been the dominant Statis-Pro team we've seen in real action this year, and they were in danger of falling out of the playoffs when they trailed 5-1 in the eighth against the talented young White Sox. However, if you look at the red results in the top of the 7th on the scoresheet below, Piscotty hit a 2-run homer to cut it to 5-3, and then after a Murphy double, Laureno hit a second 2-run homer in the inning to tie the team. Two innings later, Siemien hit yet another 2-run win for the 7-5 win. Siemien had a second straight game-winning homer in game two in the eighth inning. Once again the White Sox led 2-0 into the 4th, but Canha got things going in the 4th with a 2-run homer. 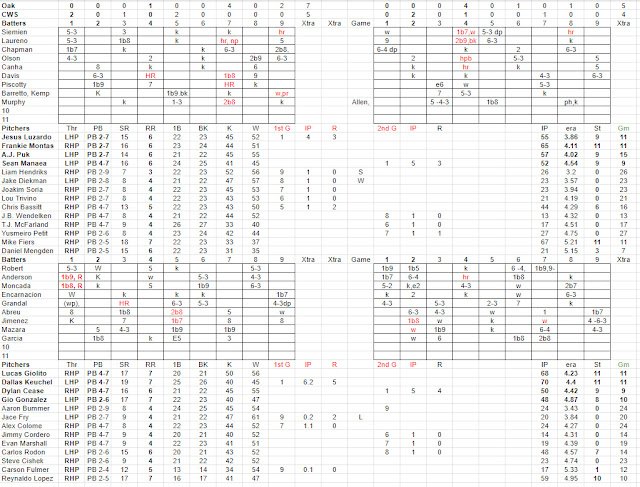 Games will be added.
Posted by JohnPudner at 2:29 AM