These were the standings at the 72-game mark. We switched to easier to read score sheets with free new game cards for all pitchers based on new Zips projects, which you can see here.


Once thehthe schedule above is done the strength of schedule will be balanced and all 10 teams will have played 6 games against each other, as well as the same number of relegated teams (5 from each league that did not make the cutoff for the top 10) and NL teams who did advance. You can print out projected player cards for all 30 teams by scrolling down to May 24, 2020 on www.pudnersports.com and use them with free instructions by clicking here. All you need is a few dice. However, while we don't sell anything, we do recommend once you try out the game you order your own playing cards and game by clicking here. The only adjustments I make to those cards is to create a deep range for ball parks based on this chart, and I still use the Clutch Defense Ratings of 1-5 I calculated on these team scoresheets. My guidelines are a player needs to be on the 40-man roster http://mlb.mlb.com/team/depth_chart/and any pitcher projected to pitch at least 120 innings (before shortened season) can start, 80 innings can pitch up to 2 innings or 8 batters every other game, and 40 innings up to 1 inning or 4 batters every other game.

schedule The Rays caught the Yankees for 1st in the East with a 5 games to 1 series win. All teams now have 72 games played - tand both the Yankees and Rays have closed the gap for the overall AL lead to only 3 games behind the Astros. The Rays and Yankees also have one more 6-game series against a relegated team, and the Astros have the tougher schedule with none. 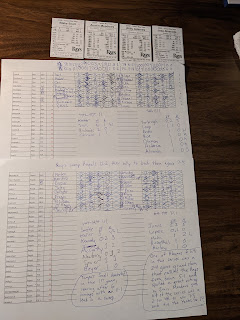 schedule Yanks closed to within 3 games of the Astros and 2 ahead of the Rays in the East behind Torre historic 4 HR game with the ball flying out of Coors Field. Both Chapman and Green had saves, and Judge added 3 HR and threw out two runners from right field. 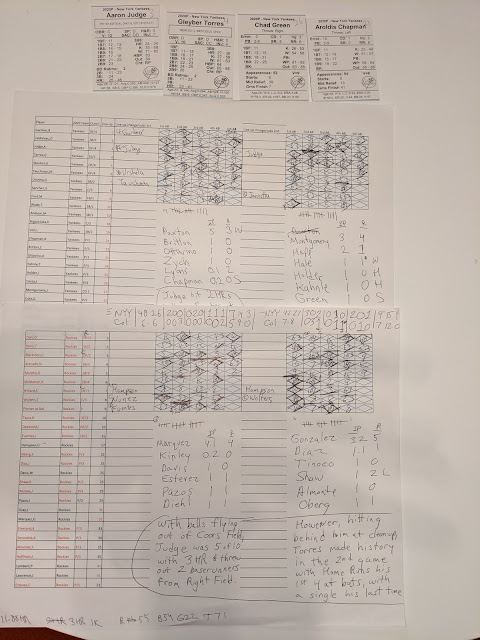 The Reds crushed the A's to drop them to just one game ahead of the White Sox for the last playoff spot. 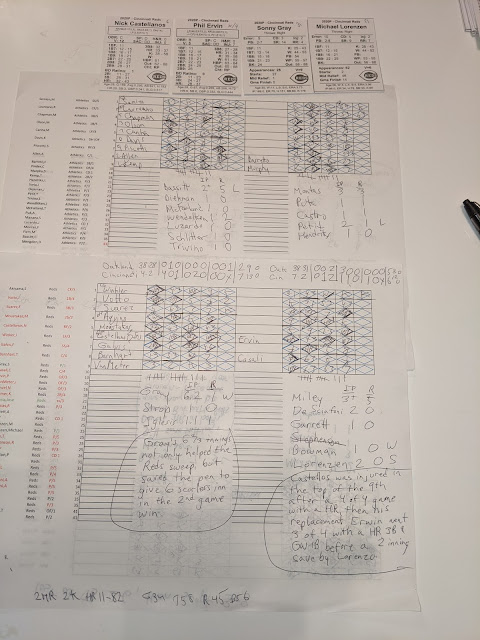 To balance out the Strength of Schedule, we balanced the schedule by allowing each team to end up with five  of their series for the season against teams relegated in either the AL or NL (not finishing in the top 10 to advance). After these games, each team will still have their match-ups against other qualifying teams from the AL or NL. The AL East teams were a a disadvantage at the 66-game mark because they only had 3 series each against relegated teams to 4 or 5 series from each AL West, team, but at the end of these games all will have 5 series against relegated teams (in below under "Still to Play.") The record of the 10 relegated teams against the AL qualifiers are:

We took a break from the AL games against relegated teams due To excitement over the Atlanta Braves picking up Yasiel Puig as a Free agent. Puig delivered immediately as a cleanup hitting to help
Cool the Astros with their first series loss of the season. The Braves Trailed 7-5 going to the bottom of the 10th. Using new MLB rules the Next batter up Freeman automatically was given second base, and
Then Puig hit a 2-run Homer and Ozuna followed with a solo shot To tie it and the Braves went on to add a walkoff single.

Ace Soroka made it easier in the first game, holding the Astros to 2 runs in 7.1 innings pitched. The Braves are now 9-3 against the AL qualifiers, while the Astros still have the best record but drop to
47-24. The Braves just missed three additional home runs in the series. Twice on Clutch Batting (BD) chances the Random Number was just 2 or 3 numbers out of the Home Run range, and on a third chance
a Deep Drive resulted in a 72 (in games in Atlanta, an 11-68 is a home run and a 71-88 is a deep fly out). Both the Astros and Braves have a reading of 2 HR and 1 K on their team deep range, meaning the highest
4 hits numbers (mainly home runs) and first 2 strikeout numbers on each batter's card are changed to DEEP drives and then a second number is drawn for the ballpark result. See this chart, 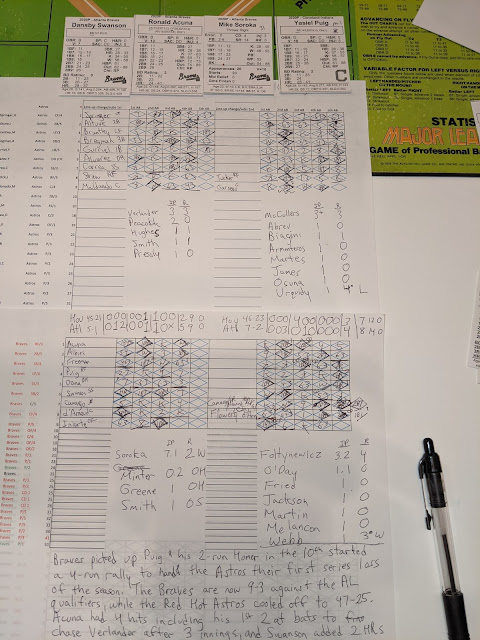 
The relegated Padres scored walk-off wins in both games to push the Blue Jays to 5 games behind the last wild
card spot. In both games the Jays rallied to tie the game in the top of the 9th, but Pham took one of the best
closers in the game (Giles) deep for a 3-run walkoff in the first game, then Cordero's 2-out double was followed by
Myers Texas League bloop single for a walk off in game 2.

The rallies ruined 4-hit series with home runs for both Craig Biggio's son Cavan and Vlad Guerrero's son with
the same name. 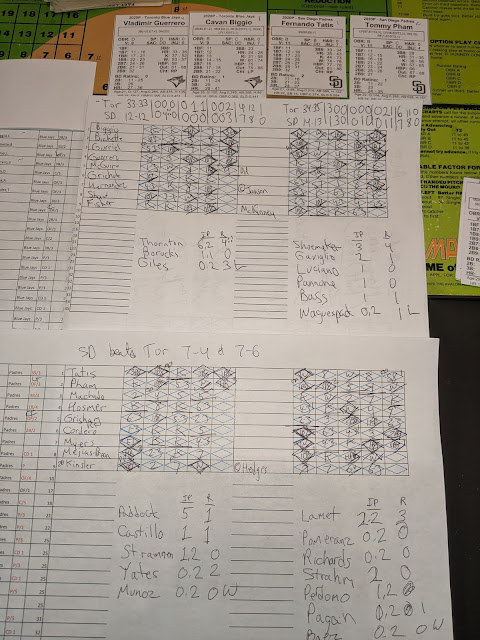 The new and returning arms of Teheran and Ohtani gave the Angels
Just enough starting pitching, and the returning bat of Ohtani and
New bat of Rendon provided 10 of the 31 hits as the Angels surged
Two games ahead if the White Sox for the last playoff spot and
Within 2 games of the top wild card spot. They may have added just
Enough to make the playoffs in a shortened season. 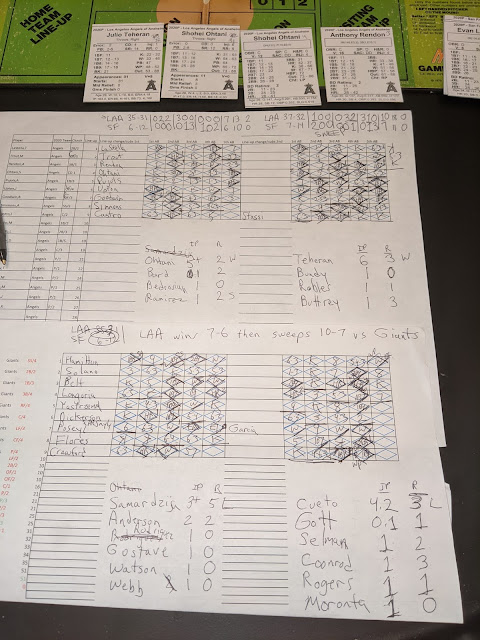 The Indians dropped to 35-37 and three games out of the last playoff spot with two costly upsets at the hands of the Orioles, who entered the series 8-22. 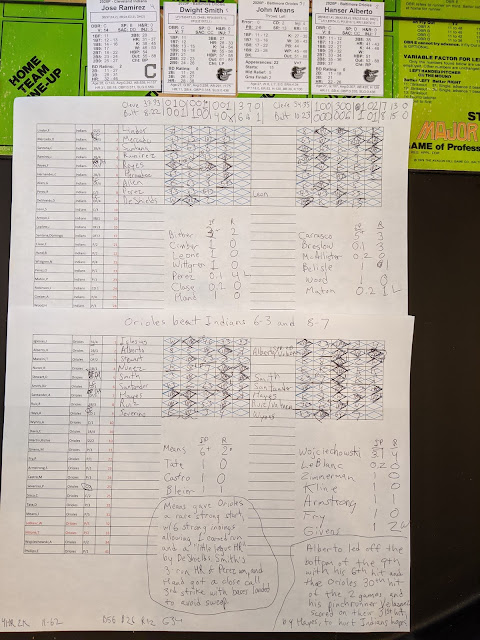 Despite the best pitching outing of any pitcher this season, deGrom on a 9th inning bloop single to finish with 8 2/3rds innings, 15 strikeouts, and only two hits allowed through 8 innings (both by Abreu). Big series for White Sox since their game against a "relegated" team was actually against the Mets (technically the 10th place team of the 10 that made it) as they added Cespedes as a pinch hitter. 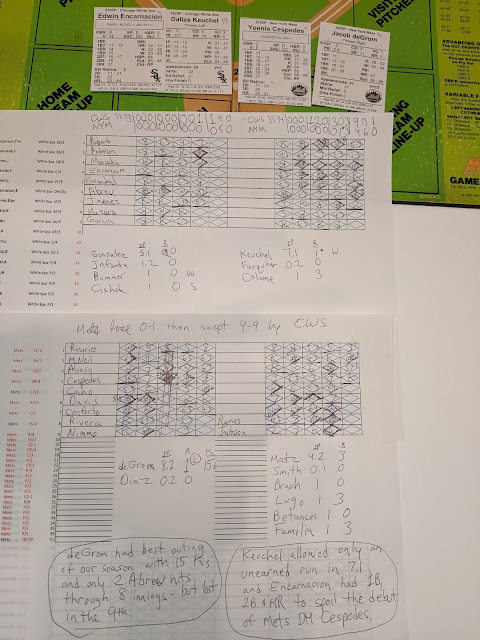 The series of games below are games between the 10 AL Qualifiers. 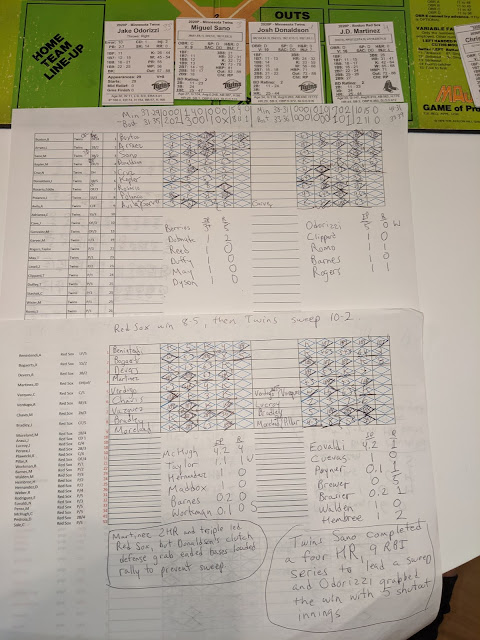 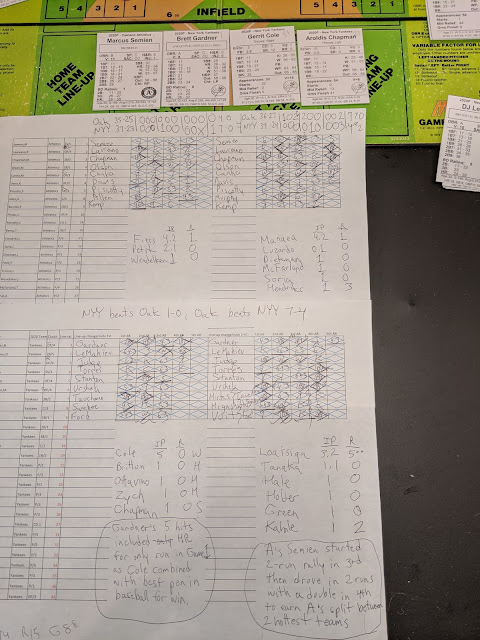 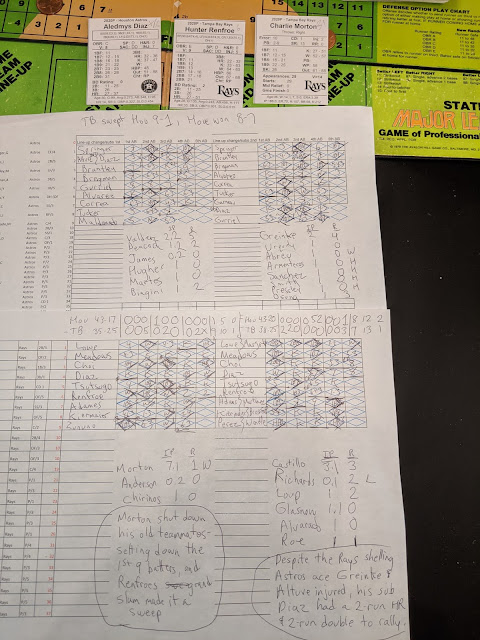 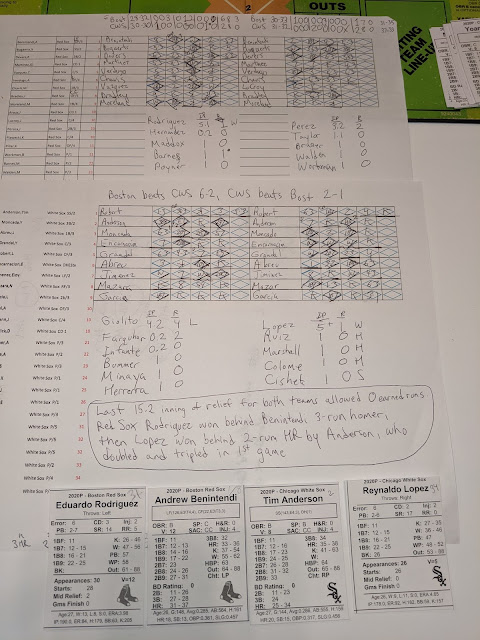 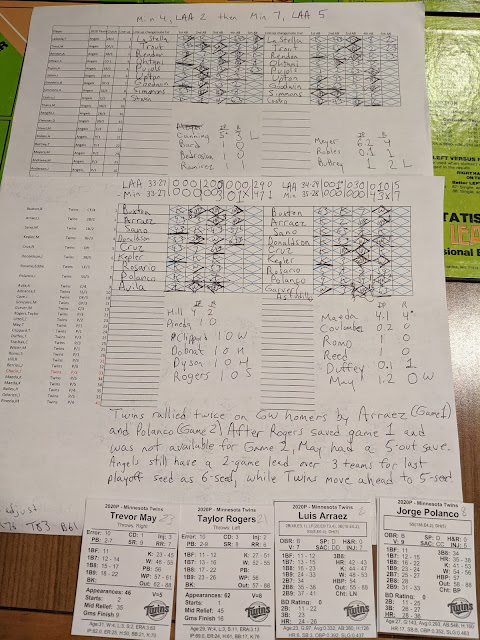 The new Major League Baseball extra innings came into play for the first time. Under the 2020 rules, the player who would lead off every extra inning instead starts on second base. This worked out perfectly for both teams as their No. 9 hitters were due up to start the 10th inning of Game 2, with Drury leading off for the Blue Jays and then Allen for the A's.

It was shocking this game went extra innings, as the A's led 7-3 when Semien's line drive in the bottom of the 7th with two on would have expanded the lead - but Biggio not only made a diving catch on a clutch defensive play, but then hit a 3-run homer in the top of the 8th to tie the score 7-7.

It was deja vu all over again when an A's line drive down the third base line might have won the game in the bottom of the 9th, but Guerrero made a diving grab and turned it into a double play - then amazingly Guerrero also followed the defensive gem with a 3-run homer in the top of the 10th to make it 10-7 Blue Jays.

However, Canha's walk off grandslam in the bottom of the 10th kept the A's as the top wild card spot by salvaging a series split to end the game at 35-25 - in second place in the AL "West" of the 10 teams who made the first season cut.  They still trail the Astros by 8 games for the Division title and first round bye. 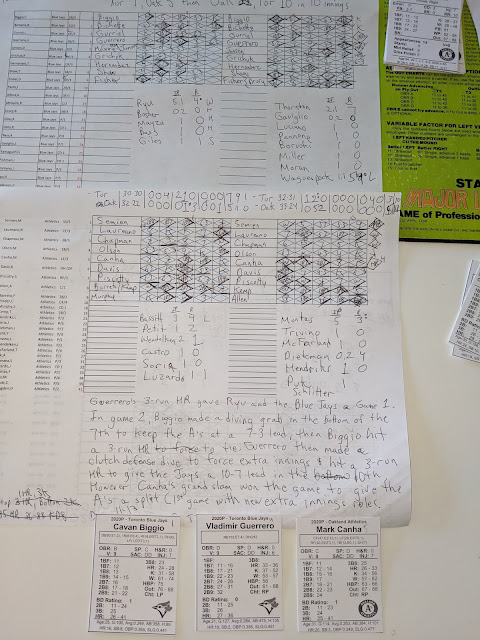 The Indians bullpen put up 5 scoreless innings culminating with Brad Hand's save to catch the Angels for the last playoff spot.

However, the Angels moved back ahead for the last playoff spot in a second game sweep (8-2 after 8 innings makes it a sweep even though the Indians got with 2 runs in the 9th). Trout's Homer was his 4th hit of the series and Upton's Homer was his third HR of the series. 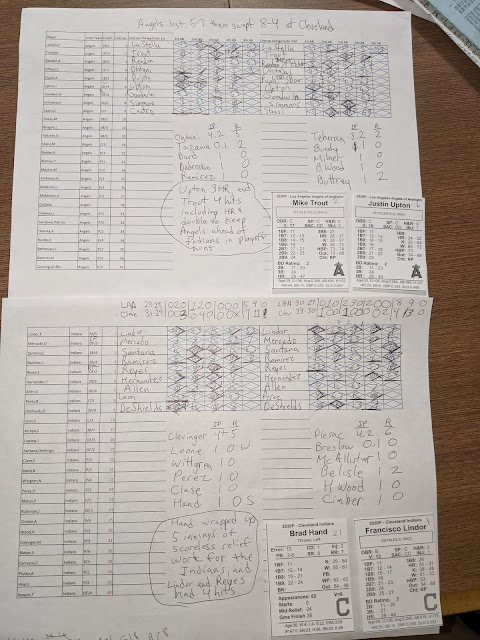 All four White Sox 2-8 relievers registered a scoreless inning. (We play relievers can only pitch to one inning or 4 batters unless they pitched more than 1 inning let every 2 games their team played).

Shohei Ohtani hit 2 HRs and will pitch the next game, but the Angels dropping the series 5 games to 1 leaves them only 1 game ahead of the Indians for the last playoff spot. 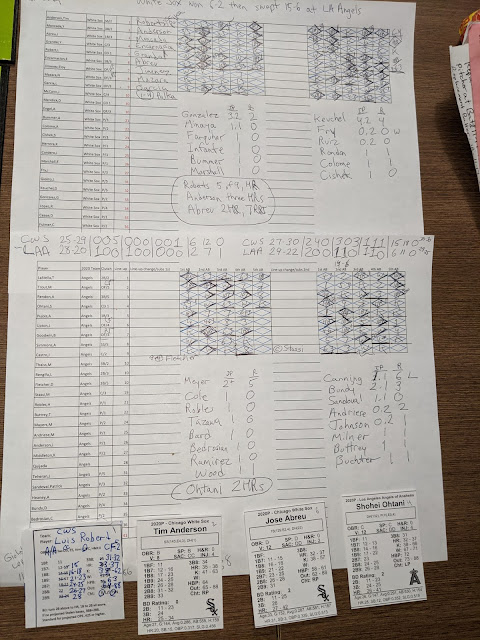 This was the first game played with the new Statis-Pro cards after the All-Star game was the last to use the old cards.

Oakland rallied in the 8th to sweep the Twins and move into the top wildcard spot (3-seed) and knock the Twins down to the final 6-seed. Davis had the game winning 2-run Homer in the 1st game and game winning in the second game.

The Twins Kepler had a drive that would have been out of any other AL park, but in Oakland only an 11-13 is a home run and 14-88 is a flyoutout on the deep drive. 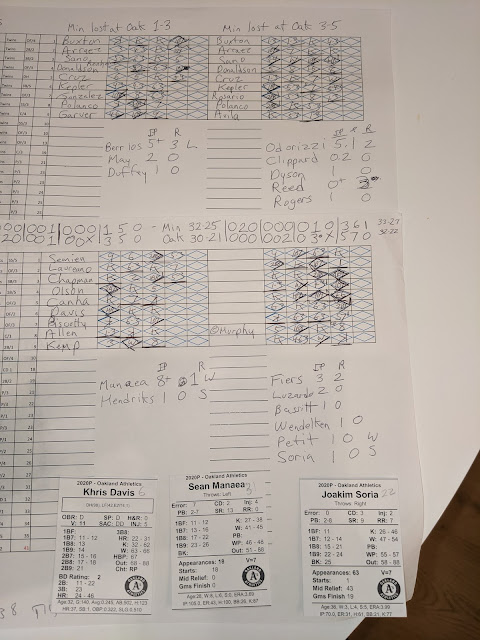 All of our league series are 2-game series.

Each reliever can pitch one of the two games in each series.

A Long Reliever can pitch up to 2 full innings no matter how many he faces, or if he comes in during an inning can pitch to 8 total batters.

A Short Reliever can pitch a complete inning, or if he comes in during an inning he can either finish the inning or pitch up to 4 batters.

The starter runs out of energy once his SR drops below 1 (one is subtracted for any hit allowed, walk, hits batter or any run who scores as a result of one of those runners then scoring, or at the end of every inning pitched). When a starter runs out of stamina, then for every additional SR reduction his PB drops in the same order as the previous paragraph.