As of June 7, Major League Baseball and the Players Association failed to reach agreement on a 50- or 82-game schedule. However, we have proceeded with the Statis-Pro season to simulate how the players and teams were projected to perform and here are the standings. Our first phase was allowing the top 10 teams in each league to continue with the rest of the season, then once done the playoffs will feature the four divisional winners getting a bye and then the next best four teams in each league playing series - if the playoffs started June 8, 2020 this would be the bracket: 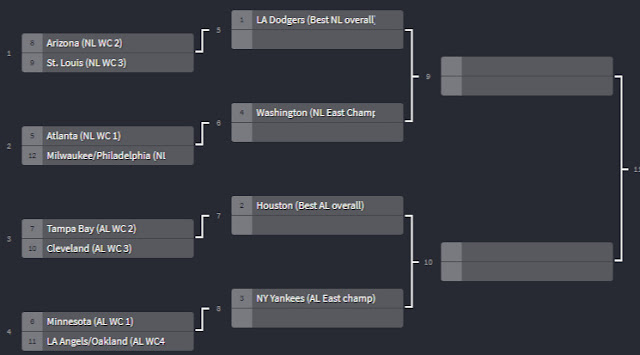 Learn to play the game yourself with sample basic Yankees and Dodgers cards. I don't sell anything, but you can order these player cards from the 2019 season, and previous blogs provide adjustments when Zips projections predict a much better or worse year, or to create cards for new players (2019 Minor Leaguers, Japanese or Cuban players expected to play for Major League teams this year).


After 10 NL teams advanced to the main Statis-Pro season, the defending NL champ
Nationals ripped off 6-straight wins, before dropping 3-of-4 to drop into a tie with the
Braves at 7-3. The Dodgers lead the NL West with the same mark. The leaders are
starting to separate a bit, but the wildcard race will definitely go down to the last day.
The determination of seeding 3-6 will also go to the final regular season games. Since
the relegation, the Pirates have played well in hopes of building to make the cut next
year. More details on stat leaders and games in this blog.

In American League Statis-Pro play, the Houston Astros and Tampa Bay Rays jumped out to big early leads as all 15 teams had until the 42-game mark to make the top 10 and continue. However, the New York Yankees are now the hottest teams in the league. The Boston Red Sox struggled mightily with Chris Sale out for the season after Mookie Betts and David Price left for the LA Dodgers, but barely managed to make the final 10 team cut with a 17-25 mark - leaving all five relegated teams between one and three games behind them.

Posted by JohnPudner at 6:32 PM