After announcing the AL All-Star starters, and tracking the Astros and Yankees moving to the top of the Statis-Pro AL standings, we turn our attention to the NL just three days before the Statis-Pro All-Star game in Salt Lake City.

First, we announce the NL All-Stars, and then we will update on the NL season going into the All-Star Break, and finally we close with end of season awards:


The Washington Nationals lead the way with seven selections. [4 players, 3 pitchers]
The Atlanta Braves are next with four named to the team.
The main controversy is the fans voting in Christian Yelich despite a sub-par first half. J
I think with reserves I have maybe 35-36 players on the roster.

As for the 10 NL teams which made the cut to compete for the playoffs:


Well, we anticipated a very competitive Statis-Pro NL race and we’ve got it heading into the All-Star break.

Meanwhile at the bottom, the Reds lost 7 of 9 to start and have gotten back in the race by winning 6 of their last 8.

Even the Mets have won 4 of 5 to keep their wildcard hopes alive.  A lot to be decided in the next nine games.

Here are the cards for the leaders (available here, we bought them and had a local Fedex print them on card stock and cut them in black and white to save money), with details on their stats to date below. 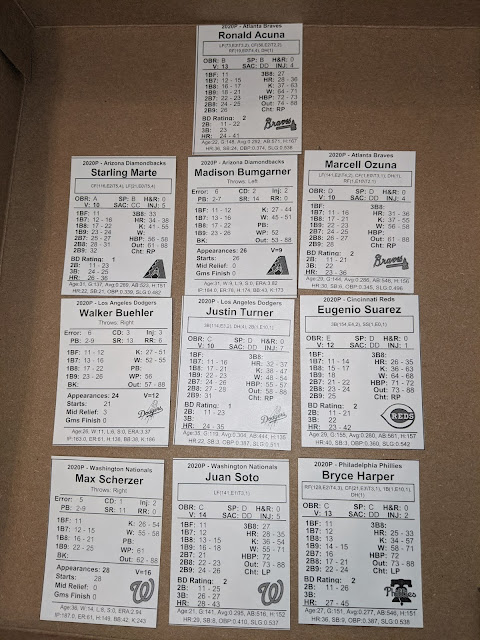