The following is the updated grid of game results for the 10 AL teams to advance in the Statis-Pro simulated season. As games are completed, score sheets will be inserted below. A note on how much we let relievers pitch is here.

Through games of June 21, 2020, the standings are as follows, then broken down by each team's record vs. the other 9 AL qualifiers, then the Relegated teams, then the NL Qualifiers.

Standings updated for all games below this line: 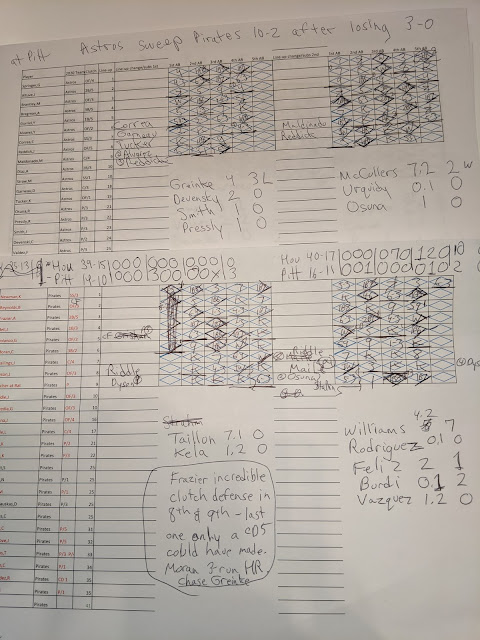 As good as the games were, MLB fans might most have enjoyed the Padres beaning three Astros in the 15th after falling behind. 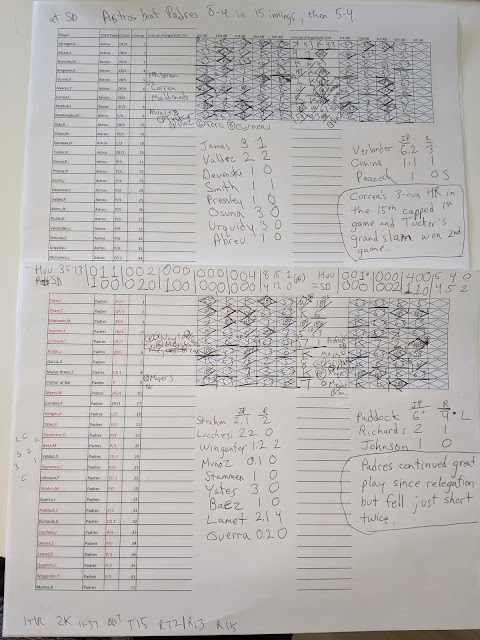 The Red Sox, who barely avoided being one of the five relegated teams while 10 games below .500, have surged back into the picture with a giant comeback against the Indians that started a 2-game sweep and pulled them within three games of the Indians for 3rd place.

Bieber's 8 innings of shutout ball to open the series collapsed as another blown save from the Indians once mighty bullpen started back-to-back losses to the last place Red Sox.

Benintendi and Martinez both had four hit series and relievers combined to allow only 3 runs in 9 innings to get the two wins despite neither starter lasting 9 innings. 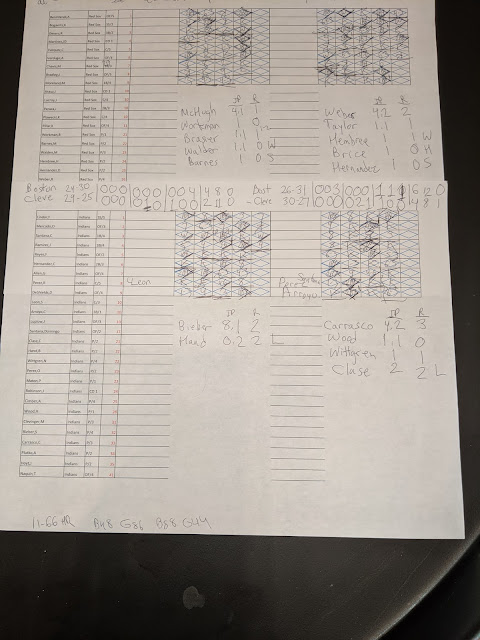 Rays lost to the Tigers to fall further behind Yankees but then swept to get back within 2 games. 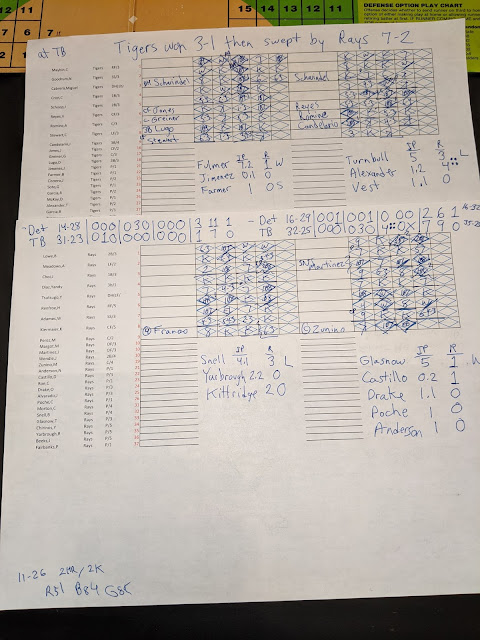 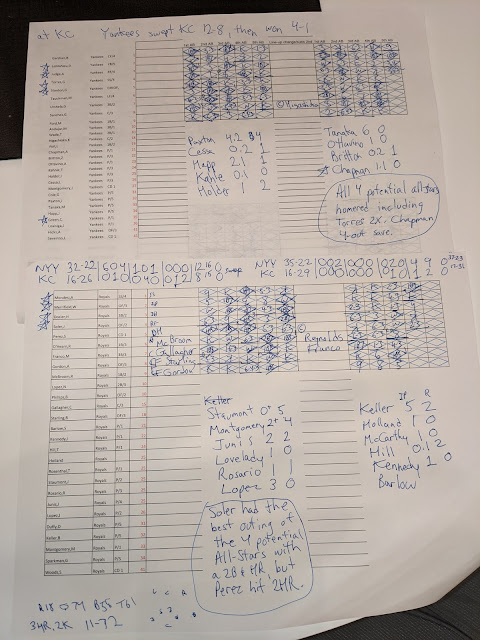 Blue Jays All-Star starter Biggio reached 6 of 9 times and all-star Giles recorded a 4-out save. Guerrero hit a double and Homer in his first game to make his case. Ryu did not pitch.

Pirate Polanco hurt his all-star case with a 1 of 8 series, while Kela helped his case with another perfect inning I'm the 8th inning of the game 2 3-2 win. Dyson singled in the 9th, stole second (Speed A), went to third on a grounder and scored in Newman's game winning single. 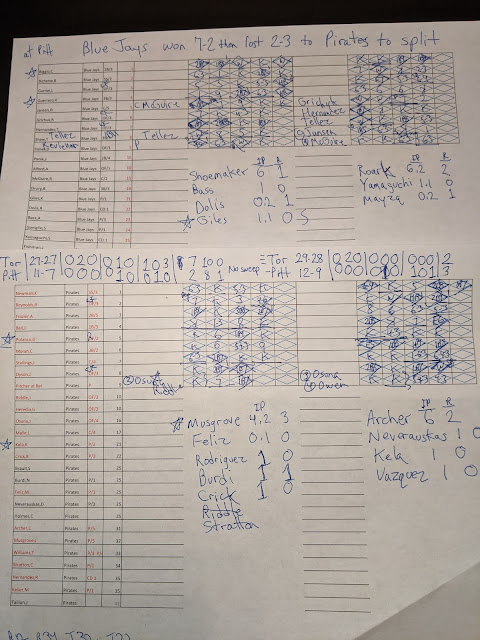 Red Sox sweeps 10-5 and wins 3-2 in 11 innings. Two new decent starting pitchers for the Marlins were not enough, as the Red Sox Bradley hit a grand slam to chase new ace Lopez en route to a 10-5 sweep. In the 2nd game another new starter Sharp went 5.2 shutout innings and the Marlins led 2-0 in the 9th. However, Moreland's 2-run homer forced extra innings and then Pillar's RBI triple in the 11th gave the Red Sox the 5 games to 1 win to improve to 24-30, still 7 games out of a wild card spot but a step in the right direction. 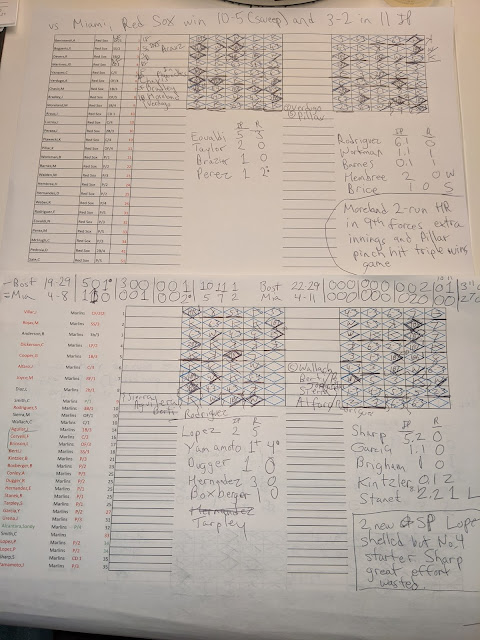 The following are the games played starting June 13, 2020 after the nominees for the 2020 Statis-pro All-Star Game (scheduled for June 27) were picked. We focus the notes on potential all-stars trying to put in a good final performance to make the team. 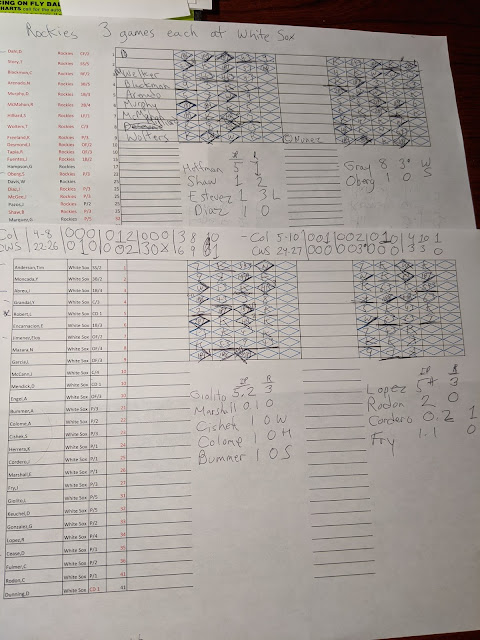 Rockies Dahl made every case for NL All-Star with 5 hits in series including game-winning double in 8th of second game. White Sox Grandal made his case with three hits including 3-run HR. 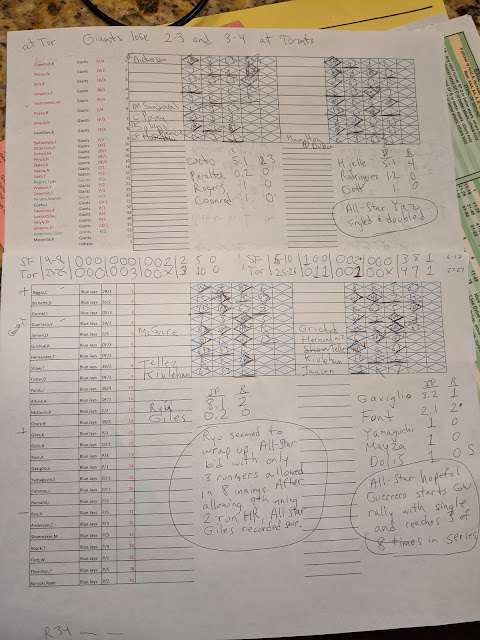 Blue Jays 3, Giants 2. Ryu may have locked up an All-Star spot after allowing only three baserunners in 8 shit out innings. When he did finally give up a 2-run Homer in the 9th, All-Star Giles came in to save the 3-2 win.

Blue Jays 4, Giants 3. Giants All-Star Yastrzemski helped them to a lead, but Blue Jays All-Star Biggio and All-Star hopeful Guerrero (2 of 7 for series, still on the bubble) had hits and Hernandez came through with the key double which skipped passed Yastrzemski to key the rally.

Posted by JohnPudner at 7:11 AM