The following step let's you adjust cards slightly for ballparks. 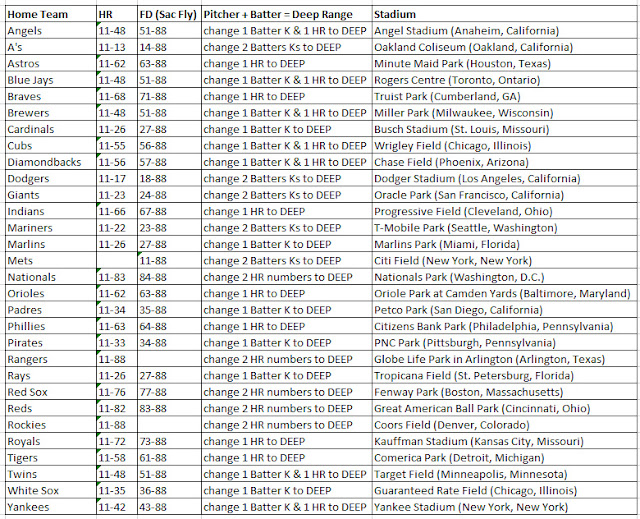 If Mets' players who need to hit in the best pitchers' park were to play at the best hitters park in Colorado, this would be the procedure.

First look at the pitcher + batter Deep Range for BOTH teams.

1) The Mets park says to change 2 Batter's Ks to DEEP, and the Rockies' says to change the 2 Batter's Home Runs to DEEP.  You add these together for both teams, so EVERY batter on BOTH teams during the Mets vs. Rockies game would have their highest two Home Runs and their lowest 2 Strikeouts changed to DEEP.  For example, if a batter in that game had a Home Run Range of 27-32, and a Strikeout Range of 33-48, then you would create a DEEP range of 31-34 from the highest two HR and lowest two Strikeouts for either team.

2) During the game, anytime a Random Number on a Batter's card fell in this new DEEP range then the play might either be a Home Run or a Deep fly ball that is caught but advances all runners one base. If this game was played in Colorado the Deep Drive is always a Home Run (11-88 below) but if the same two teams played in New York the adjustment in 1 above would be the same but the result would always be a deep fly ball for an out.

In every other park except the Texas Rangers, the play might be a Home Run or a Deep drive depending on where the 11-88 Random Number fell between columns two and there below.

However, in the first step if the Angels (change 1 K and 1 HR) played the A's (change 2 Ks) then in that game each player would have 3 strikeouts change to DEEP and 1 HR change to DEEP, so the 27-32 Home Run range above would change to 32-35 for DEEP drives.
Posted by JohnPudner at 7:06 PM