While the AL Statis-pro season includes a few interleague games and counts 5-run wins as 3-game sweeps, the NL season uses true records of games played and only counts games played against other NL teams. While standings will be updated shortly for May games, the following are the April standings and previews:

Preview:
NL “East”
Even with losing Anthony Rendon, hethe is replaced by Thames from the Brewers making them look tough to beat.
Another quality rotation and a pretty good line-up put them in each game.

But once again their bullpen depth could cause issues though former Astro Will Harris adds one arm.

The Braves are their main challenger. They have a better bullpen, but it might not offset a weaker rotation, including Teheran leaving for the AL.

The Phillies, Mets and Cubs all have weaker starting pitching and only average offenses.

The Dodgers are clearly the favorites for the division and the pennant.

The Reds looks surprisingly strong on paper. But they have to think Wildcard spot right away. Japanese centerfielder and leadoff batter Shogo Akiyama has the best new player card in the NL based on his zips projected stats. 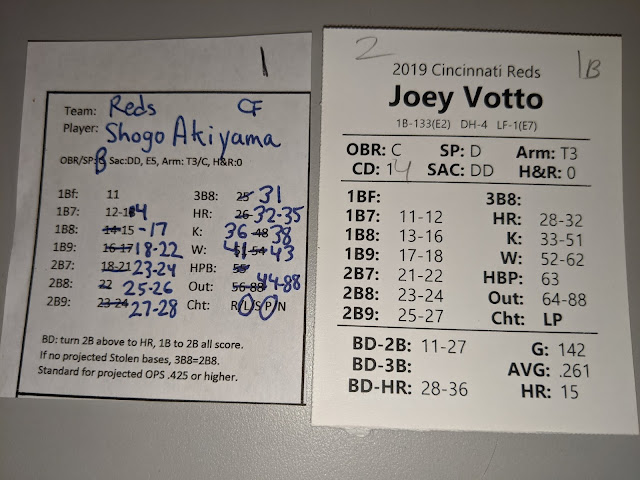 The Diamondbacks and Cardinals will struggle to score runs, but good pitching makes them competitive.

The Brewers could be a factor, but they have the weakest bullpen in the league and don’t have deep starting pitching.

Overall, the Dodgers & Nationals look good followed by a very competitive Wildcard race.
Will there be any surprises?  Roster moves that make a difference?

Ten teams will play for a spot in the Statis-Pro World Series.

They will be divided into a pair of five team divisions.

The division winners will receive a bye.

The next four best records will meet in an opening round best-of-5 Wildcard Round.

The Division series and LCS will be best-of-7.

Posted by JohnPudner at 4:11 PM