Pitcher's at bat cards for all 2020 players

The standard NL starting pitcher should hit with an OPS close to .200, which is reflected by using the hitting card in the middle with singles on 11-14. The standard AL starting pitcher or NL reliever rarely hits, and when they do use the same middle card but only allow hits on 11 or 12, so the strikeout range is 13-48. In either case, ignore the opposing pitcher's PB and simply use the next card or dice roll to get the 11-88 number and use the pitcher's hitting card. (The third card to the right just gives you an option if you need a pitcher's card created for a new player.)

However, if a pitcher hits well then look up his career or projected OPS and and round it to the nearest .050, then reference it on the chart below to adjust his batting card. This card will give him almost the exactly correct OPS at the plate over time. Note that if his OPS is closest to the .400 or below card, then you still skip the opposing pitcher's card and go straight to the pitcher's batting card. However, if his OPS puts him on a .450 or higher card, then you are basically working from the card on the left, and you treat him as a normal hitter and check for the opposing pitcher's PB first to see if the RN will be on the opposing pitchers card or not. You can also use this chart for any new players who do not have a full card. 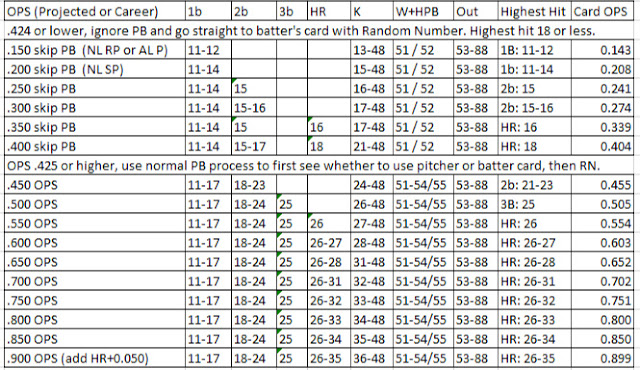 The following are the 60 pitchers we project to hit for an OPS of at least .250 based on a sufficient number of career or in a few cases season at bats. They are listed by team, but with the NL team listed first. The Reds' Michael Lorenzen is the top hitter of all pitchers, projecting an OPS of .700 which translated to the card with a home run on a 26-31.