The two conference alumni teams we did not include in our league were the Big Ten and the Big West. In retrospect we should have included them to form a 6-Team alumni division along with the ACC, SEC, Big-12 and Pac-12 to out Venezuela in the other division with the other 5 international teams.

The Big Ten was a little thin with a player at all 8 possessions but only one true MLB bench player. We fill rosters with a standard batter card for a minor leaguer or retiree (Ichiro was on Japan's bench) with an 18-21 homer range (see bottom of third photo below) who needed to do any pinch-hitting. The Big Ten also occasionally needed to go to a standard minor league reliever (see PB:2-4 card at bottom of three photos.

However when we pulled the Big West cards we realized this team could have completed with the SEC, Pac-12 and ACC for the divisional title. Five Cal-Fullerton batters led the dominant 8-man line-up below, and when Shane Bieber starts for them they can beat any team.

Below are those 8 players followed by 4 score sheets. We had the two teams play each other with each of their four starting pitchers throwing once. Summaries of the four games are below the photos. 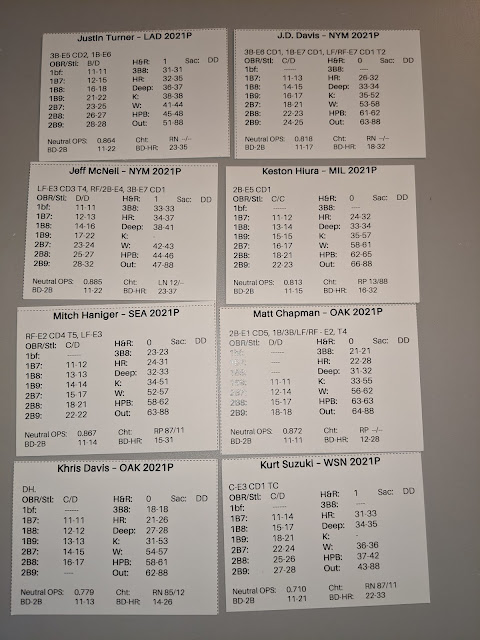 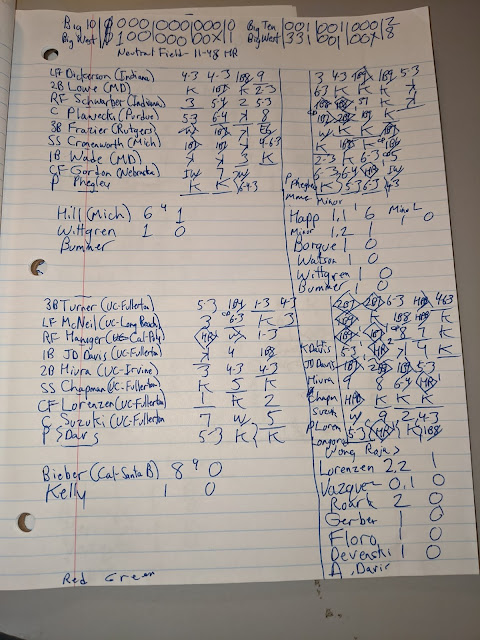 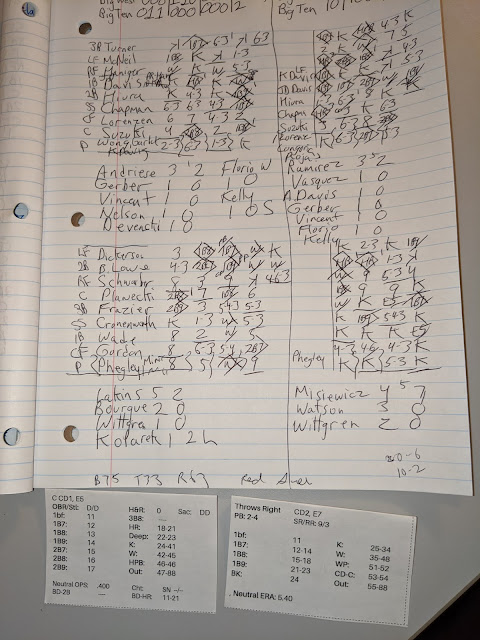 The Big West certainly looked like a team we should have included. They outscored the Big Ten 20-6 in the four games and based on our record keeping for our season (3-0 series sweep for 5+ run win, 2 games to 1 for other games) the Big West would have a 10-2 record from these games.
Big West 1, Big Ten 0. Shane Bieber threw 8 innings of shutout, 9 strike out baseball to make Haniger's first inning homer 1-0.
Big West 8, Big Ten 2 (sweep). Justin Turner double and scored in the first and second inning and Khris Davis homered to chase Happ with a 6-0 score in the second en route to the sweep.
Big West 4, Big Ten 2. Frazier and Brandon Lowe doubled in runs in the 2nd and 3rd innings to give the Big Ten their only lead of the series, 2-0. However, 6 straight Big West relievers threw shut out innings and the Big Ten's Kolarek could not hold a tie in the 9th, walking JD Davis and then allowing singles to Hiura, Chapman and Suzuki in the loss.
Big West 7, Big Ten 2. Haniger's 2-run homer and Chapman's 3-run homer have the Big West a 5-0 lead in the first and they held the 5+ run lead after 8 innings for the sweep to finish 10-2 for the series.
The Big Ten's star was Brandon Lowe, who homered twice in the game to make it six straight times he had reached base in the losing efforts.
Below is the original blog setting up this matchup.

The one regret we have in our just concluded season between conference alumni all-star teams and international teams, is realizing we did have enough Big 10 and Big West players to add them. This would have created two divisions of 6 teams each - one for the all-conference teams and one for the international teams. Looking through the Statis-Pro cards, here are the teams we see. The Big Ten would have been tight with only one bench player, but we have a standard replacement card we can use to fill rosters with minor league players from the conference. Perhaps we will put these two teams on the field for a few games for fun.

And here is our Big West Roster.
Posted by JohnPudner at 6:48 PM