1. Explanation for home ballparks for each team.

2. Standings for our World Baseball Classic with a list of parks

3. Short summaries of each game in the 2nd half, and scoresheets for all games for the entire season are now in this blog.

During the 1st half of the Statis-Pro World Classic (click for scoresheets and details for each team) we played in "average" ballparks, meaning on a DEEP rating on the card there is a 50-50 chance of a home run. We went through each team's rotation twice, with the ace (No. 1 pitcher) facing the opposing ace twice (1 vs. 1), then the second best pitcher pitching the opposing second best pitcher (2 vs. 2) then 3 vs. 3, 4 vs. 4 etc. Each starting pitcher will pitch two more times in the second half detailed below, but in this case, the match-ups will include each ace getting to face the opponent's 4th best pitcher (1 vs. 4) and then the No. 2 pitcher facing the opposing team's 3rd best (2 vs. 3) etc.

For the second half, we chose a home stadium for each of the 10 teams. We picked a stadium that would help the team - so even though Miami would be a logical place for Cuba, they are a home run hitting team so would prefer a more home run friendly ball park and the Great American Ballpark (Cincinnati) which yields home runs on  11-82 on a deep drive. The following are the record for each team in each of our divisions, followed by the ball park we decided to use for their home games, and what numbers from 11-88 are home runs vs. deep flies for outs. Click for this google doc for the details of each game for each team, and click here for all player cards and and game instructions.

The Multi-Coast Division: DR must travel to three pitcher's parks, where the three 2nd place teams hope the ball will stay in the park for upsets.

The original chart showing the home run range.for all 30 parks is below. If the random number results in a "Deep" result (between Home Run and Strikeout ranges) then a new random number is drawn and if it falls in the first range the result is a home run, and if not it is a deep fly out and all runners advance one base.

Dominican Republic 9, Puerto Rico 7. DR's No. 4 starter Valdez (6 IP, 1R) easily outdueled Puerto Rico's ace Corbin (4,5). PR chose the best pitchers park in baseball (CitiField) and held DR without a homer, but Lindor reached and scored in the 1st, 3rd, and 5th to chase Corbin and make it 6-1 before PR arllied late on homers by Molina and Bader to avoid the sweep.

Pac-12 5, Cuba 1. Gerritt Cole threw another 8 innings allowing only an unearned run, but it was still tied 0-0 in the 7th. Chapman entered in the 7th with 2 outs and runners on first and third only to have Calhoun greet him with the homer.

Cuba 13, Pac-12 4 (sweep). Cuba launched 6 home runs in the hitting-friendly Great American Park to deal a severe blow to the Pac-12s chances to catch Venezuela. World Series hero Arozarena hit a pinch-hit 3-run homer, Abreu hit 2 HRs, and the three batters in front of him in the order all homered as well (Luis Robert Iglesias and Alvarez).

SEC 6, Big-12 0. Scherzer lowered his ERA to 1.38 and the SEC is credited with a 7-2 record with him on the mound as they received credit for a sweep to pull within 3 games of 1st place Venezuela. Swanson's 2-run triple in the 8th delivered the 5-run margin for the sweep.

Big-12 3, SEC 2. Buehler's 7 scoreless innings and a chance to close in on Venezuela were wasted when closer Pomeranz blew the save, giving up a 2-run double to Mayfield and then walk off single to Orf.

Venezuela 8, ACC 3. Perez hit a grandslam homer and Venezuela ended up with 7 homers in the 2-game series to open a wide lead with a 19-11 mark. Carrasco gave 5 solid innings to lower the team's starters ERAs to 1.78 for the year.

Japan 4, Mexico 3. R. Urias shocked Darvish with a 3-run HR in the 2nd, but Japan fought back and in the 9th Ohtani singled, stole second, went to 3rd on a clutch defense passed ball, and scored on a wild pitch for the 4-3 win. Amazingly after this game, six of the 10 teams in the league were playing exactly .500 baseball, with only Venezuela and the Dominican Republic above .500 and only Cuba and the Big 12 below .500.

Mexico 8, Japan 2. After topping 2 runs only once in 7 games, Mexico winning 8-2 in a 2nd straight game behind 3 hits by R. Urias and four more with Cuthbert. Japanese starter Anderson was injured in the 1st inning.

The second column on the table below gives the range of numbers that result in a home run after a DEEP reading on a batter's card. 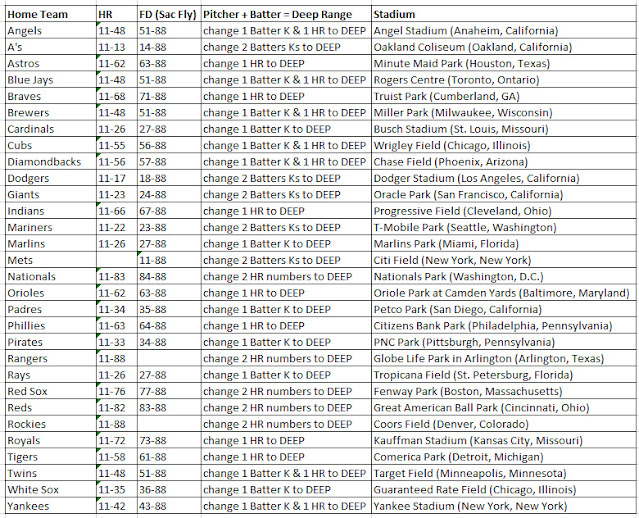 Posted by JohnPudner at 5:20 PM