Summaries of Games 1 through 3 of the Statis-Pro World Baseball Championships appear here. The following are the summaries of every following game starting with Game 4 and continuing down until a champion is crowned.

After a couple of slugfests, two excellent No. 4 starters engaged is a pitchers' duel eventually won by the Dominican Republic 3-2. Venezuela goes back on the road risking elimination as they trail 3 games to 1 and face the best starter in the series - Luis Castillo.

Venezuela's fielding continued to kill them as hitting star and shortstop Gleyber Torres blew the shutout by throwing away a bases loaded double play grounder to put Venezuela in a 2-0 hole. Technically only one run counted as a double play because you can only assume the first out, but it would have been an inning ending double play which would have played out to a 2-1 Venezuela win.

Game 5 - Dominican Republic ace Luis Castillo (Reds) attempted to wrap up the series, but Aguilar and Perez hit 2-run homers off him and Venezuela's Carrasco outdueled him (7 innings pitched and 2 runs allowed). However, Castillo left after 7 innings with a 4-2 lead, the Dominican Republic rallied in the 8th on a singled by Tatis, walk drawn by Soto, double by Ozuna and single by Sano to tie the game 4-4 and eventually force extra innings.

With Venezuela on the brink of elimination, both bullpens then put up 7 straight scoreless innings - the 9th through the 15th inning - to leave the score tied 4-4. However, while Venezuela still had relievers available for the long haul, the Dominican Republic got to their last available pitcher in the bullpen in the 13th inning in Diego Castillo. D. Castillo pitched three scoreless innings but then lost all endurance in the 16th inning. In the top of the 16th, D. Castillo walked E. Suarez and Perez, and then when Jose Altuve hit a grounder to short and Tatis bobbled it for his third error of the game to load the bases. Peralta then singled in two runs to make it 6-4, then Santander was hit by a pitch, and pinch hitter Rojas drew a walk to bring in another run to make it 7-4.

Venezuela's 8th pitcher of the game - Ramos - then retired Devers, Tatis and Ramirez in order in the bottom of the 16th to pull Venezuela to within the 3 games to 2 in the best of seven championship.

D. Castillo will need to sit out Games 6 and 7 for pitching to 19 batters (at least 12 batters requires two games of rest).

A host of his bullpen mates will sit out Game 6 due to facing at least 5 batters - Dominguez, Colome, Montero and Dolis, but their stopper Neris is available because he had a 1-2-3 inning and did not pitch in the previous game (relievers who pitch 2 games in a row always sit out a game).

Venezuela is much healthier in the bullpen for Game 6, with only Alvarez, Graterol and Alvarado needing to sit out a game.

If the series goes to Game 7, then the Game 4 starters are also available in relief. Here is the scoresheet and box score for the 16 inning Game 5. Final Game 5: Venezuela 7, Dominican Republic 4 (16 innings). 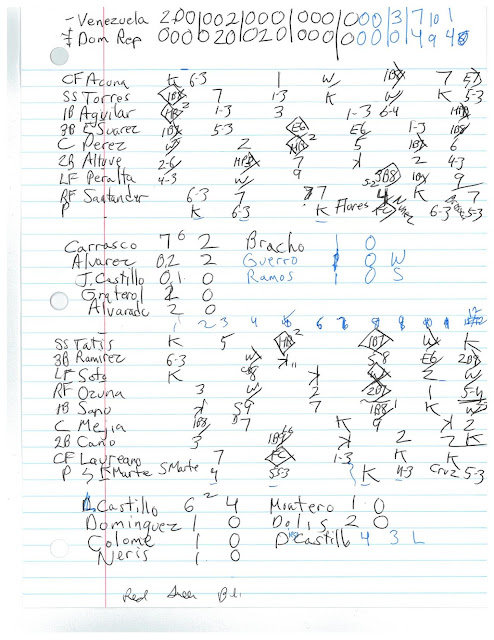 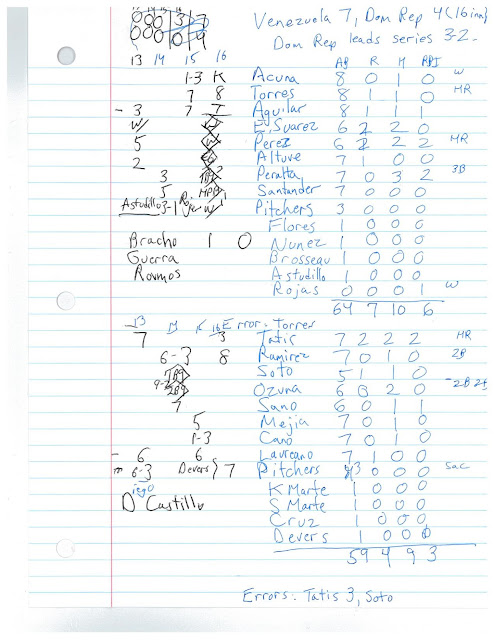 After all the slugging and poor fielding throughout the series, the championship was won on a pitchers duel that ended with a clutch defensive play.

The game after he committed three errors, Dominican Republic shortstop Fernando Tatis dove to rob Jose Altuve of a game-tying single, and instead got up and turned a game-ending double play to preserve a 1-0 win.

The play made a winner of Danilson Lamet, who pitched a brilliant 7 innings allowing only 2 singles until back-to-back hits in the 7th. However, Pablo Lopez almost matched him with 6 innings if 4-hit ball, but one of those hits was a 4th inning homer Jose Ramirez.

Next year the two will be in the same division along with Japan, Mexico, Cuba and Puerto Rico. The other division will include next teams of college alumni teams from the Big West and Big Ten to join the ACC, SEC, Pac-12 and Big-12. 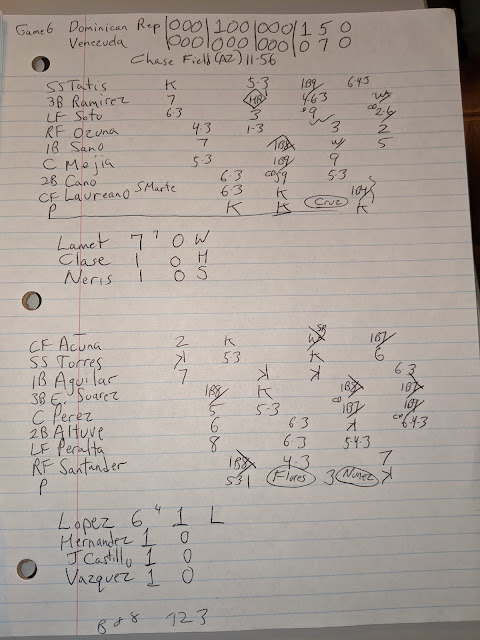 Posted by JohnPudner at 7:01 PM