Venezuela-Dominican Republic slugfests in Game 2 and 3

In a rematch of last year's Statis-Pro World Baseball Classic, the Nats Juan Soto led off the 8th with a tie-breaking Homer to lead the Dominican Republic to a 5-3 win and Game 1 of the best of 7. (regular season stats are at the bottom of the blog).

The Reds Luis Castillo (Dominican Republic) and Indians Carlos Carrasco (Venezuela) both allowed only one earned run in the hitter friendly Progressive Park in Cleveland (11-66 homer, 67-88 fly out). However the ballpark held a deep fly by the Astros Jose Altuve that would have given Venezuela a 3-0 lead in the 4th.

The game also included three great defensive plays outfield assists from Laureano (DR) and Santander (Ven) and catcher Perez (Indians) who was started over Sanchez (Yankees) threw out Ramirez (Indians) to end the 7th for the DR ahead 3-2.

Perez then led off the 8th with a Homer to make it 3-3, before Soto homered. 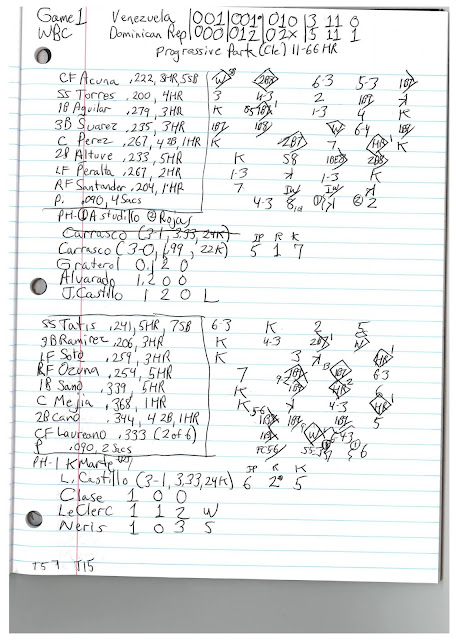 Game 2 - Pablo Lopez (Marlins, Venezuela) at Dinelson Lamer (Padres, Dominican Republic).
Torres grandslam homer in the 4th gave Venezuela a 6-1 lead, and they added an incredible 6 more homers to win 13-8 and even the series one game a piece.  Altuve hit two homers as Venezuela's 11 hits included 4 singles to go along with the 7 homers. 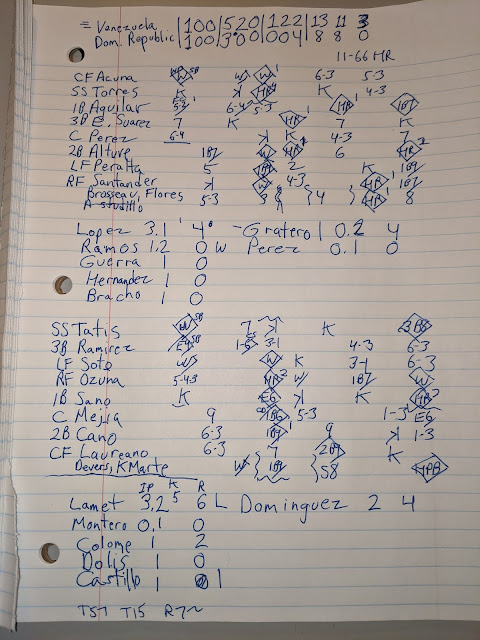 Game 3. Ronald Acuna and Gleybor Torres greatest DR starter Luis Severino, but Venezuela could not hold the quick lead - falling 8-6 and behind 2 games to 1 in the championship. DRs top two batters also had big night's, with Fernando Tatis scoring 3 times and Jose Ramirez hit a 2-run homer, 3-run doubles, and was robbed of a third hit by a clutch defensive play by LF Peralta. 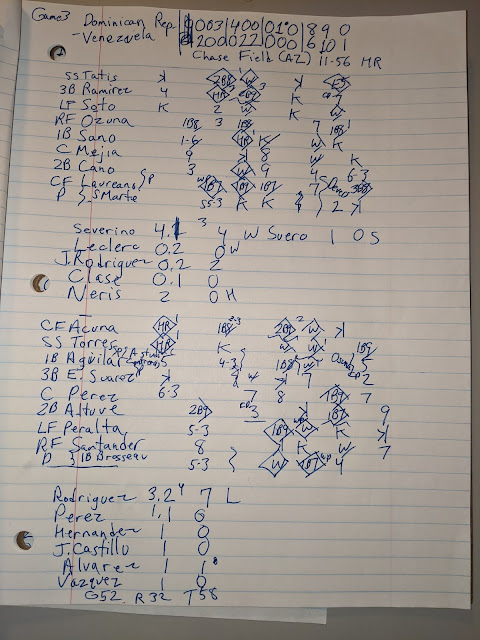 Click for the 16-game Regular Season scoresheets: Below are the line-ups used most of the season for each team, showing first what the normal position on their card was and the OPS their card should yield over time, and their Major League Baseball team. After that we list their actual stats in 16 regular season games; PA = Plate Appearances, W/HPB = total times either walked or hit by pitch, Sac=Sac Bunts or RBI Sac Flies, AB = at bats, H = hits, BA = batting average, 1B = singles, 2B = doubles, 3B = triples, HR = Home Runs and SB = Stolen bases. Only one player stole base for each team during the entire season, and it was the two lead-off men. Fernando Tatis stole 7 bases in 16 games for the Dominican Republic, and Ronald Acuna Jr. stole 5 for Venezuela. We play pitchers bat in each game, and though some pitchers are better hitters than others, for the entire season both teams' pitchers went 2 of 22 for an .091 batting average. The Venezuelan pitchers did slightly better though because they drew one walk, and laid down 4 Sac bunts, while the Dominican Republic pitchers had only 2 Sac bunts.

Posted by JohnPudner at 9:12 PM