By the time our new Value Add Basketball Game player cards (print pdf in top line of game instructions) were available in the easy to play sheet form, our All-Time and 2020 tournaments were complete.

We wanted to try the freshly printed sheets in a real game. We decided to put the 2020 champs Creighton, which riddled everyone through Duke with few turnovers and hot 3-point shooting, against our All-Time No. 1 seed 1972 UCLA which did win the title over the 1982 UNC.

The first great news for any of you that want to play is that the game took just under 30 minutes to play - the sheets are so much quicker to read than sorting out cards.

Creighton seemed one of the best challenges for the pre 3-point line UCLA. In theory a barrage of 3-pointers could trade 3 points for 2 at the other end off a dunk from Bill Walton or drive from All-American Henry Bibby.

That worked for a while and Creighton scored 14 points on 5 consecutive trips at one point. Zegarowski, Alexander and then center Mahoney hit 3-pointers (imagine Walton was not used to guarding the opposing center at the 3-point line in this coaching match-up of McDermott vs. Wooden). Alexander (team high 17) drive to score again, and then drove and scored and was fouled, hitting the free throw for a 52-48 lead with 15:01 to play.

However, Bibby (18 points) and Walton (16 points, 12 rebounds, 3 steals, 2 blocks) dominated the rest of the way against a very average defense in Creighton. In the last 15 minutes, UCLA outscored Creighton 36-17 despite not taking a shot on their last trip to claim the win 84-69. Here is the scoresheet. 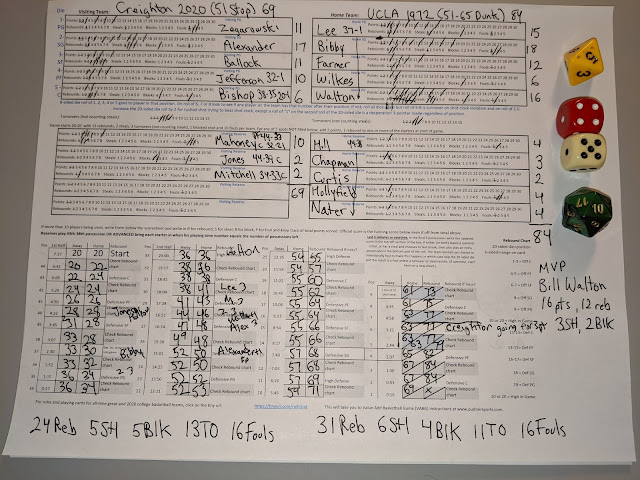 Creighton surprisingly were not destroyed on the boards, losing just 31-24, though with both teams hit there were not many rebounds to get.

However, normally Creighton dominates the turnover and foul battle, making few mistakes on either. In this game UCLA actually won the turnover battle 13-11 and both had 16 fouls. The equalizer was Walton, leading UCLA with 3 steals and drawing 6 fouls, even though Creighton avoided many fouls that other teams would have committed.

While all 197 teams are available through this pdf, here is a photo of how they lined up for this game. 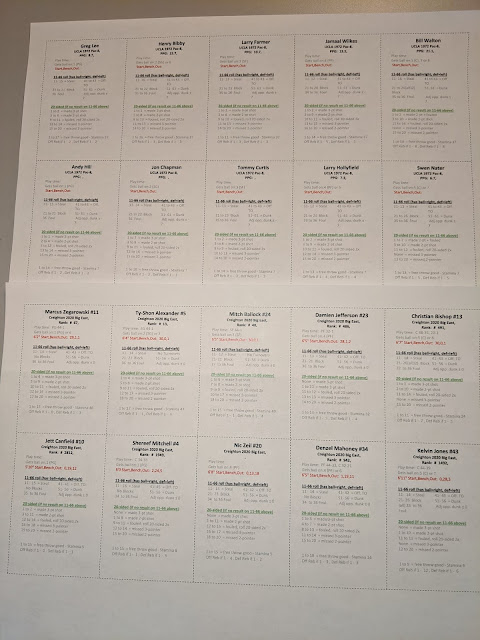 Posted by JohnPudner at 8:29 PM