In our run off the new look pdf playing cards for the Value Add Basketball Game, there was one error. Instead of the block field below the steal field, the offensive turnover range was duplicated. For example, on the UCLA cards below, Bill Walton should have the best block range possible, a 21-26 (32 all). This means that when his opposing center gets the ball because the 8-sided die roll is a 5, the Walton blocks the shot if the 11-66 roll is between 21-26. 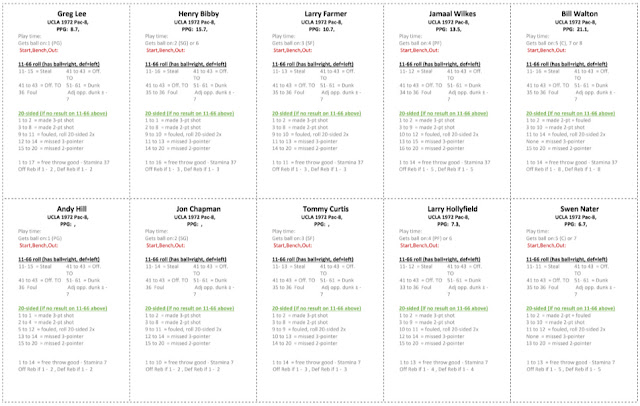 The block range refers to the rolls on the 11-66 dice roll that result in a blocked shot if the player he is guarding has the ball on an 8-sided die roll of 1-5 (the opposing center would have the ball on a "5" of 8, giving Walton a chance to block the shot). Therefore, if the opposing center gets the ball an a 21-26 or 32 is rolled then Walton blocks the shot regardless of would have happened on the 20-sided die.

If any opposing player has the ball regardless of the 8-sided die roll, Walton blocks the shot on a 32 as indicated by the 32 all.

Advanced rules indicate other times on which a player may block the shot of any opposing player on the court, as referenced in the right column on this breakdown of how many players in the game have each of the possible block ranges:

We will fix the cards on field error, but until we do, here is a list by team of the correct block range for every player in the game.

Posted by JohnPudner at 9:50 AM