The following are the Sweet 16 Teams to survive the All-Time Value Add Basketball Game tournament of 96 All-Time Great Teams. Below we break down the four teams to survive from each Region with their next match-up as well as the path of the first three rounds with their results, and their leading scorer, rebounder, steals leader and blocked shot leader in each of their games to date.

Winners in bold Advance to Elite 8 (details below):

You can also click on the index for the results and leaders for all 96 teams in the tournament, and the link to the free Value Add Basketball Game including all player cards. Click for notes on the 1st round games in the West Region, East Region, South Region, Midwest Region  , 2nd round games, and 3rd round games.  Each school limited to one team per century, but other top contenders listed here with the top contenders for best teams of all-time not included in the game: Arizona 2001, Duke 2001, Indiana 1992, Kansas 1992, Kansas 2003, Kentucky 2015, Michigan State 2000, North Carolina 2003, UCLA 1967 (and most of UCLA 1964 to 1975). 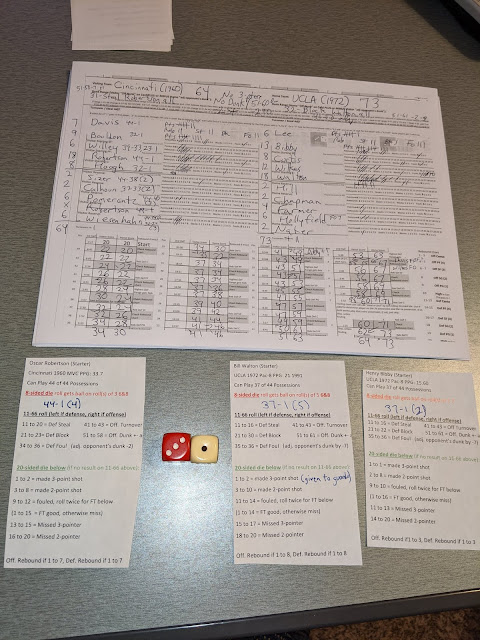 #2 UNLV 1991 vs. #6 Texas Western 1966. Larry Johnson seems absolutely dominant under the boards and Stacey Augmon scoring. In real basketball winning 45 straight including drubbing Duke by 30 in the 1990 national title before Coach K pulled off a stunner 77-79 upset in the 1991 semifinal to stop a repeat. However, both UCLA 2006 and Arizona pushed the Rebels to the limit in 83-80 and 75-71 wins in our tournament. They face the historic Texas Western team which put the first all-black starting line-up against Adolph Rupp's all-white Kentucky team to win a historic game that ultimately integrated all basketball sooner than it might have otherwise happened. In the game Texas Western, which later became UTEP showed they would win with defense as Artis had a game high 10 points and 3 steals in a 54-53 slugfest against Al McGuire's 1977 Marquette then turned it up with an 82-76 shootout behind 19 points from Lattin and 5 Steals from Hill to upset Louisville 2013. Result: Texas Western overcame Larry Johnson's dominant 27 points to upset UNLV 71-70. Orsten Artis scored 15 and Dave Lattin 14 as the first all-Black starting line-up to win the NCAA title (over Adolph Rupp's all-White 1966 Kentucky) pulled another upset to advance to the Elite 8. 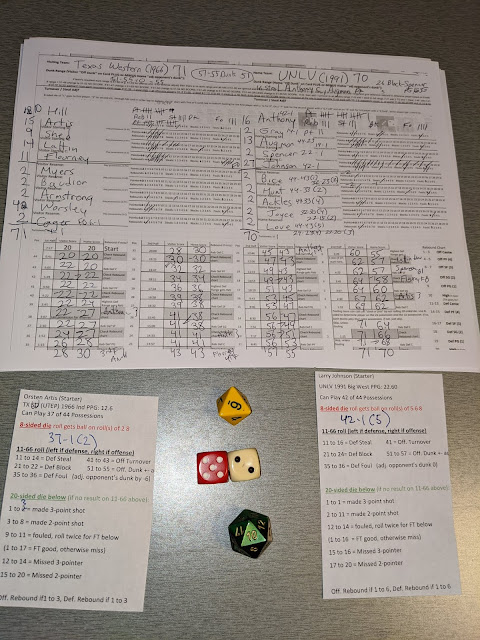 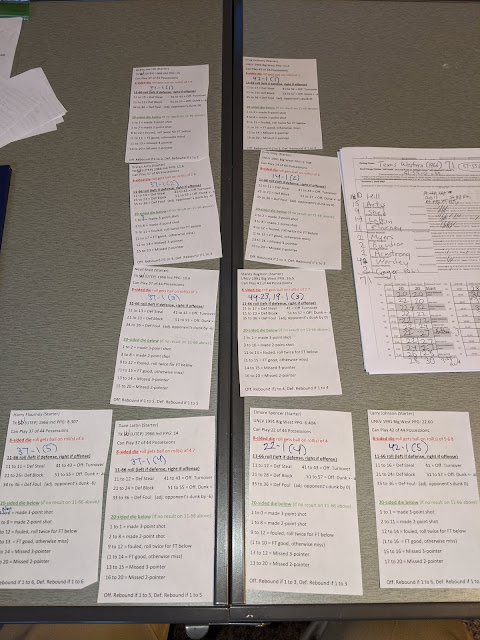 DICE WEREN'T WITH THEM. Favored Team that did not make Sweet 16: Louisville 2013

#4 Villanova 2018 vs. #10 Duke 2010. In retrospect, we probably should have chosen Duke's 2001 squad to represent them in the 21st Century (each school could only have one team from each century). However, in the game Scheyer, Singler and Smith never rest and almost never turn the ball over, and that won out in winning a rematch of 2010 Butler in the first round, then pulling out tight wins against UConn 2010 and then Wake Forest 1996, which had upset 1-seed Kentucky 1996 in the only other rematch of an actual game to date. In 1985 fans taunted Memphis with signs saying "who invited Memphis to the Big East tournament" since the rest of the Final Four was from the Big East. ACC fans might do the same if this was the actual East Regional with a "Who Invited Villanova to the ACC Region?" DiVincenzo in the game plays like the one who destroyed Michigan in the real national championship in 2018, and Spellman dominated the boards and blocked shots in wins over two Big East foes - West Virginia and Syracuse. Brunson scored 26 in the West Virginia game. 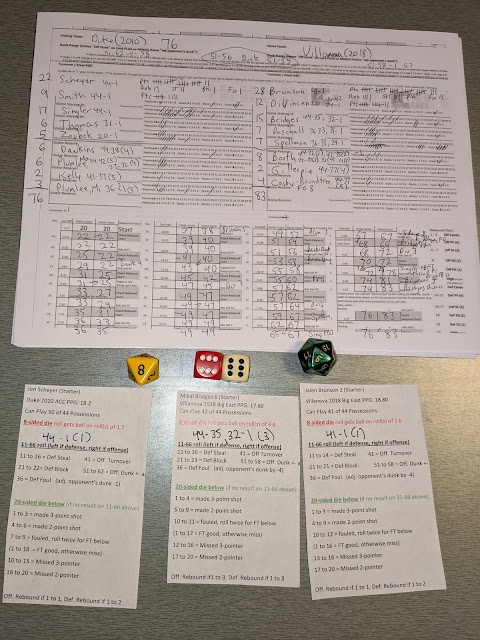 #2 NC State 1974 vs. #3 UVa 2019. The other recent champion also survived to the Sweet 16, with UVa pulling out hard fought wins against Georgia Tech then Patrick Ewing and Georgetown. They have the most interesting rotation in the game because even the starters change positions throughout the game as their defense stymies opponents and balanced scoring being led by Guy (16 then 13 points) and Diakite grabbing enough rebounds for the wins. We expected David Thompson and NC State 1974 - the team that in real life dominated UCLA to end their title run before beating Marquette in the final - to dominate, but instead Thompson had to pull out free throws at the end to beat both Seton Hall (81-80) and UNC 2005 (68-67). With no margin to spare, UVa could present a challenge.
Result: UVA 2019 beat NC State 1974 to advance to my all-time Elite 8. De'Andre Hunter outscored the great David Thompson 31-16, though Thompson grabbed 10 rebounds before fouling out. Final 71-67. 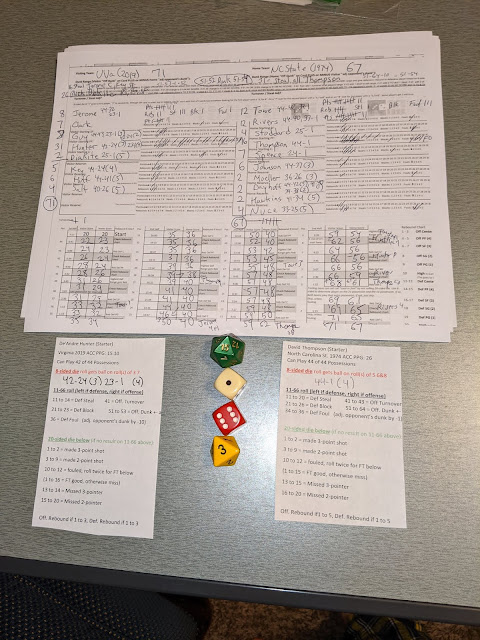 DICE WEREN'T WITH THEM. Favored Team that did not make Sweet 16: Kentucky 1996

#1 Indiana 1976 vs. #13 Oklahoma 1985. Based on the games played so far in this tournament, this game pits the best team against the best player in the Region with two of the six surprise Sweet 16 teams. Waymon Tisdale led Oklahoma 2005 to three wins, two by upset, as Tisdale averaged an incredible 27.3 points and 13.3 rebounds over three games. However, the second highest ranked No. 1 seed Indiana - the last undefeated team in college basketball way back in 1976, averaged winning 72 to 53 as Benson dominated with 12 rebounds and 4 steals against a great 2018 Purdue team and the defense help Indiana 2002 to 49 points - the lowest scoring of any team in the tournament so far. Result: Wayman Tisdale continued the magic with 27 points and 12 rebounds and even fouled Scott May out of the game. However, on the day Bobby Knight took the court at Indiana in real life for the first time in 20 years, his 1976 team dominated again to be the first Elite 8 team. Indiana 76, Oklahoma 63. 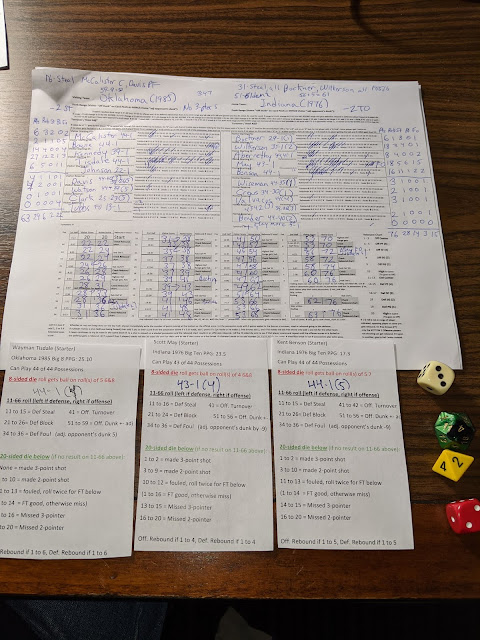 #2 Michigan St. 1979 vs. #14 Michigan St. 2009. In only the second match-up of two teams from the same schools, the Michigan State team from Draymond Green's freshman year of 2009 pulled off upsets to get to a Sweet 16 game against Magic Johnson's 1979 Michigan State that defeated Larry Bird in perhaps the biggest marketing title ever. Result: Michigan St. (2009) scored the first upset of the Sweet 16 as Draymond Green and his teammates dominated the offensive glass to score the first 20 points of the game for a 40-20 lead and Magic Johnson could only chip away at the margin. In the real 2009 season Michigan State seemed able to beat everyone - even No.1 Louisville in the Elite 8 and then No.5 UConn in the semi. However their kryptonite was UNC, who beat them badly in both the regular season and the title game. Kalin Lucas scored 23. MSU (2009) 74, MSU (1979) 63. 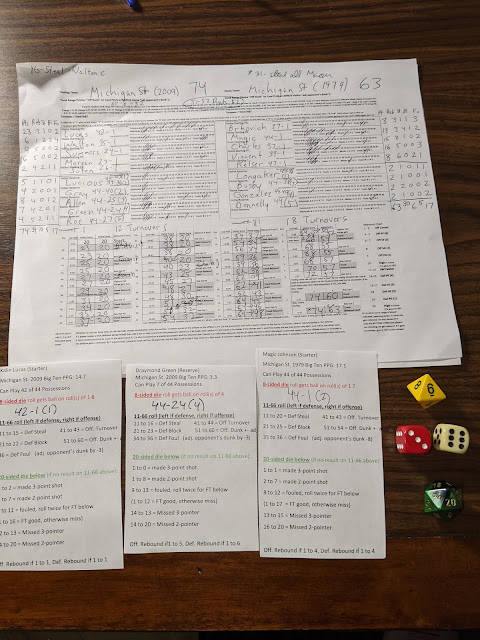 #4 Houston 1968 vs. #9 Memphis 2008. Houston's Elvin Hayes dominated both last year's great Texas Tech team and Wilt Chamberlain's Kansas team by averaging 29 points and 12 rebounds in the two games. In the real "Game of the Century" Hayes was responsible for handing Lew Alcindor and UCLA in a game that ultimately is the reason we opted for Bill Walton's undefeated 1972 UCLA team over Alcindor's team. They will face Derek Rose's great Memphis team that in the game upset the Kansas team that in the real 2008 championship they had beaten until foul shots failed them in the closing minute. That Memphis team had the all-time record 38 wins in a season though the NCAA later vacated all the wins for recruiting violations. If they had held onto the title game, their 39-1 mark would have them acknowledged in discussions as potentially the best ever. Result: Elvin Hayes (27 pts, 12 Reb, 5 blks) teamed up with Ken Spain and Don Chaney to dominate the boards 40-29 for a 75-66 win. Derrick Rose led Memphis with 17 points. 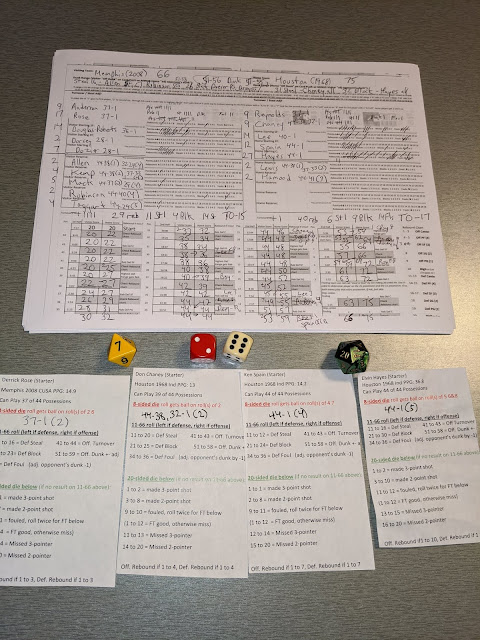 #2 North Carolina 1982 vs. #11 Auburn 2019. Michael Jordan and UNC had to fight through a win vs. Georgetown in the real 1982 title game in which the Hoyas had a chance for the game-winning shot win they famously threw the ball to James Worthy to end their chance. In the game they came within one possession of being upset by LSU when Jordan had to hit two free throws at the end of the game for the 72-70 win. They did handle Anthony Davis and 2012 Kentucky 75-66 in best match-up of superstars so far in the tournament besides perhaps Hayes vs. Chamberlain. While Auburn 2019 did not win the title, their team at full-strength (after Wiley and Purifoy were back and before Okeke's injury ) could contend with anyone in history. Consider that in the SEC title game and the NCAA tournament they faced five of the APs top seven teams in the country - beating Tennessee, Kansas, UNC and Kentucky by an average score of 87-73. The fifth game against an AP Top 7 team was the semifinal against Virginia they played after their best player - Chuma Okeke - went down with a gruesome injury and yet lost by one point after a missed call of a double dribble in the closing seconds. www.valueaddbasketball.com calculates that even with their strong bench Okeke improved Auburn by six points a game meaning a five point win over Virginia would have been projected if Okeke played. In other words, if Okeke were not hurt in the Elite 8, Auburn likely would have been the only team in history to beat five of the top seven teams in the country on neutral courts in a 3 week span. In the game, they were the only team to win consecutive games while giving up at least 78 points in each game, as they had just enough 3-pointers and steals to outlast the great 1994 40 minutes of hell Arkansas 1994 and repeat national champs Florida 2006 by 79-78 and 87-81 wins. Result: on a day that many of the same players still on the 2020 team won a third straight miracle comeback, the 2019 team led 56-53 with 6:41 (11 possessions left). However the next 5 UNC possessions included a steal and fast break score by James Worthy (55-56), steal and fast break by Michael Jordan (57-56), jumper by Jordan (59-56), steal and fast break by Worthy (61-58), a trip without a score, and then after a blocked shot by Worthy Jordan was fouled and hit both free throws (66-62 with 3:07, 5 possessions to play. UNC wrapped it up 69-62 after 2 more Jordan steals. 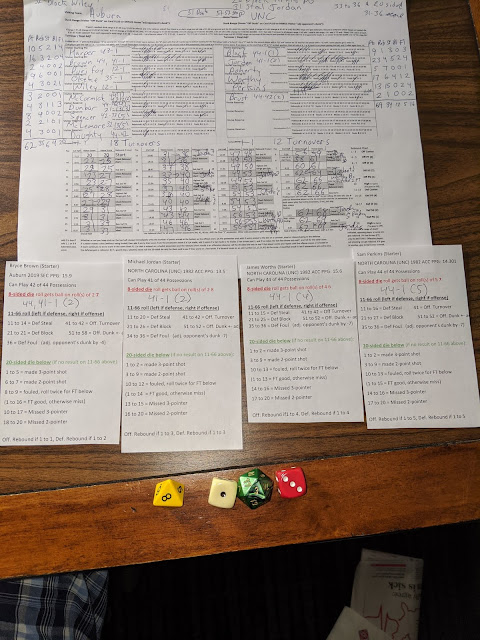