Coverage of the ALCS and NLCS Statis-Pro season moves to here.

Our 2019 Statis-Pro Playoffs are set. This year was our NL year, so we played extended 90-game seasons on the NL side and quick 12-game seasons on the AL resulting in these playoffs. The wrap up of the end of the season is here.  Five of the top 6 teams in each league as of September 21 also made the Statis-Pro playoffs - with the A's and Cardinals the two two did NOT in Statis-Pro, which uses the cards for the same players but without any injuries (e.g. Carrasco and Kluber pitch for the Indians).

Current: Astros 3-1 eliminates Yankees, Twins 3-2 eliminates Indians, Braves 3-1 eliminates Dodgers, and you need to scroll down to see incredible finale between Nats and Cubs for the 4th team still alive. 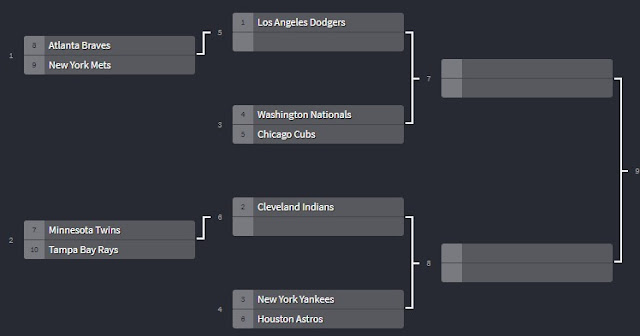 To play Statis-Pro baseball yourself click this google sheet (includes cards for all MLB players and instructions) and two 6-sided dice, two 8-sided dice and one 20-sided die. We are using cards for any player on this team-by-team list who played for a team at all in 2019 by the end of September. The rules for resting pitchers are here, and our most popular post on who to record a score sheet is here.


In the Statis-Pro Season 24 of 30 teams finished within 2 games of what their record would have been is they had their real life winning percentage. Click here for a full breakdown.

At Braves 3, Mets 0 in wildcard. Six Braves' pitchers worked out of multiple bases loaded and other Mets threats until former Red Billy Hamilton - who came in during a double switch, hit a 2-run single in the seventh inning to send the Braves onto play the Dodgers. (scoresheet at bottom)

Braves at Los Angeles Dodgers 5-game Series. Game 1 Braves 4, Dodgers 1. Donaldson singled home Albies to break up Kershaw's shutout in the 7th, and the Braves added 3 insurance homers in the 9th on a homer by Swanson and double by Inciarte. However, Donaldson failed to come up with a clutch play on a hard grounder down the third baseline by Pederson in the 9th to chase Soroka, but Minter came in for the save. ESPN predictor picks Soroka and Kershaw to finish 2nd and 3rd for Cy Young.  Game 2 - Braves 7, Dodgers 3. Freeman hits a clutch batting (BD) 2-run HR of Buehler in the 2nd, drew a walk to start a 4-run rally in the 7th, the came up with a clutch Fielding (cd) snag of a line drive over first base to turn a would be rbi double into a lineout double play. The Dodgers were my first Statis-pro team to win 17 actual games in a row this season, but will now need to win 3 straight to advance to the NLCS. Game 3 - Dodgers 2, Braves 1. Ryu single-handedly kept the Dodgers season alive, throwing 7 shutout innings and delivering a 2-run single in the 5th. After allowing a solo shot by Acuna to lead off the 8th, Alexander relieved Ryu and retired the last 6 for the save - catching one break when Donaldson ran into his slow roller to first to officially get a single but be ruled out. Game 4 - Braves 7, Dodgers 5. After my all-time Statis-pro regular season winning streak of 17 straight, the Dodgers were eliminated 3 games to 1 by the Braves. Donaldson delivered a 3-run HR in the third to make it 5-3 Bravesa Minter came on with 2 on and 2 out in the 7th and struck out 4 in a row. The Dodgers top 4 took a last shot in the 9th off Martin with a triple (Pollack), walk (Bellinger), double (Turner) and single Pederson) to chase Minter, but with the Braves almost out of pitchers Newcomb (only an average PB4-7) saved the 7-5 win. 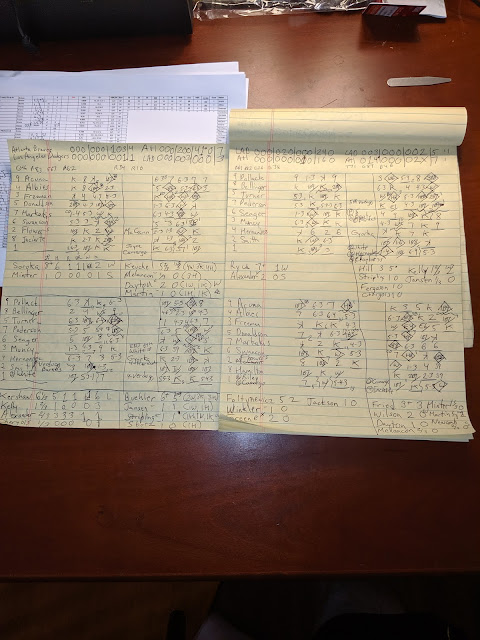 Chicago Cubs at Washington Nationals 5-game Series. Game 1 - Cubs 3, Nationals 0. Scherzer allowed only two hits, but they were homer by Happ and 2-run HR by Baez and Darvish went the distance to beat the best Statis-Pro pitcher's card in the game for the upset. Game 2 -  Nationals 6, Cubs 5. Soto's two 2-run HRs - both following Turner singles - proved just enough to tie the series as closer Rosenthal induced a ground out by Baez to end the game with the tying and go ahead runs in scoring position after a single and double. Strasburg was brilliant for 7 innings, with the only 2 runs allowed on a 5th inning collision between Zimmerman and Robles (z-play injury) that resulted in an rbi double. Game 3 - Cubs 8, Nationals 4. In the actual MLB season the Cubs are suffering from big injuries, but in Statis-Pro they benefitted from Zimmerman, Suzuki and most importantly Corbin (the Nats 3rd starter but a PB2-8 as a top 15% pitcher) all being ejected in the second inning. As if the bullpen wasn't stretched enough, both corner outfielders for the Nats let singles skip past them - allowing two runs to score on a single by Lucroy and three more on a single by Costellanos for an 8-4 Cubs in putting them one game from winning the series. Game 4 - Nationals 7,Cubs  6. Soto's double scored the game-winner in a game in which Turner's 2-run HR made it 4-1 Nats and Heyward's grandslam made it 5-4 Cubs. Rosenthal needed to overcome another tough break for the Nats as Eaton and Soto collided to allow and 8th inning double (making a record 7 Nats that have left a game I. The series due to ejection or injury. However, they now get a rematch of Scherzer and Darvish in the decisive finale. Game 5 - Nationals 4, Cubs  3 (13 innings). After the Nats all time bad luck in having 7 players either ejected or injured in the first 4 games of the series, a Darvish vs. Scherzer rematch from game 1 took 13 innings to determine who advanced to play the Braves for the pennant. Scherzer gave 6 shutout innings for a 1-0 lead before tiring, but as soon as he left Baez singled off Grace, and then excellent 3rd baseman Rendon failed to make a clutch play on a grouder to put men on the corners with 0 outs. Bryant's sac fly tied it 1-1 in the 7th. In the bottom of the 8th Turner homered to make it 2-1 and Soto doubled but Kimbrel relieved and escaped damage in the 8th or 9th. However Rizzo homered off Ace reliever Rosenthal in the top of the 9th to force extra innings. Both teams then went to their Game 2 starters for the 10th and 11th. Strasburg struck out 6 in the two innings, but in between Heyward hit an apparent series winning Homer and alomar and Kemp singled to put men on the corners before Scherzer escaped. However, Soto led off the 10th with a walk, and pinch runner Stevenson stole 2nd against Lucroy's great arm, went to third on Rendon's grounder to first, and scored on Zimmerman's sac fly. Hamel aloa pitched a hitless 11th to leave with no hits allowed but one crucial run. In the top of the 13th Baez singled with 2 outs off Sipp and stole second, but Rizzo grounded out. The Cubs were down to Maples for the 13th, and Rendon singled, Zimmerman singled him to second, and on Eaton's single to right Heyward's T5 against Rendon's on-base running (OBR) D was still not enough as Rendon scored in Sid Bream style to win the series and send the Nats to the NL Statis-pro championship against the Braves. 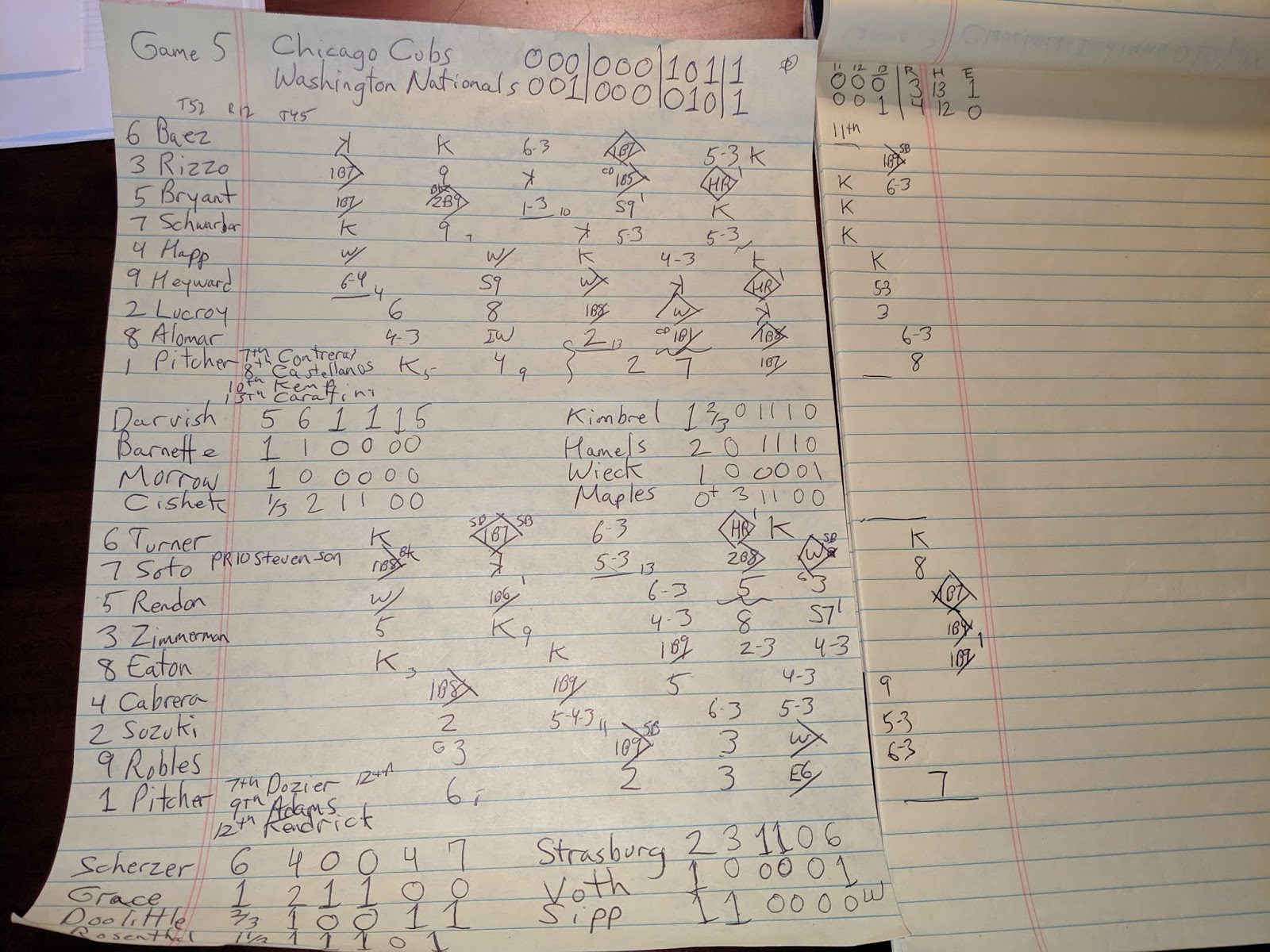 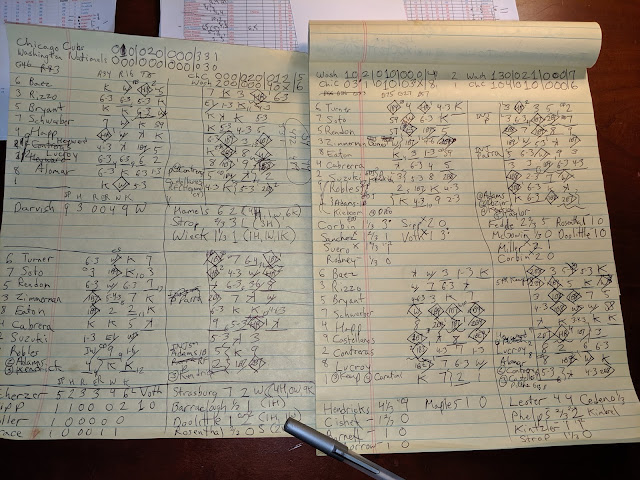 At Minnesota 7,Tampa Bay Rays 6 for wild card. IN the shcoker of the season, the Rays led 6-0 going into the bottom of the 8th with great relievers lined up, buy Cruz and Sano both homered in the 8th and then were part of five consecutive singles in the 9th to pull off the shocking come-from behind win.(scoresheet at bottom)

Twins at Cleveland Indians 5-game Series. Game 1, Indians 3, Twins 2. Perez induced a grounder to 3rd from Nelson Cruz with 2 on and 2 out in the 9th to preserve a 3-2 Indians win. Lindor tripled home Ramirez on a hit and run in the 1st, scored, then singled in a run in the 6th to count for all Indians runs, but the Indians managed to chase perhaps the best pitcher's card in the game (Carrasco) with 4 straight hits in the 5th but he was saved when Naquin threw out Kepler trying to score from second on a single. Game 2 - Twins 4, Indians 3. Vazquez recorded a save by coming in to strike out Lindor with 2 on in the 8th, then overcoming the Twins second error of the game in the ninth to hold onto the one run win. Sano singled and scored to tie the game 1-1 in the 7th and chase Kluber, then singed home two more runs after a Rosario double to make it 4-2 before Kipnis doubled and scored in teh bottom of the 8th to cut it to 4-3. Game 3 - Twins 8, Indians 2. The Twins HRs by Kepler (4 hits), Cron and Rosario put the defending Statis-Pro AL champs on the brink of elimination, 2 games to 1. The Twins pitching is suspect - a lot of average starters and relievers but no shutdown Statis-Pro cards, but they can slug and a win in Game 4 would let them clinch without needing to face Carrasco (a rare PB2-9 as a starter, meaning top 5% of all pitchers) in a decisive Game 5.Game 4 - Indians 5 Twins 3 - Watching Clevinger's jerky motion on TV while he allowed only 1 run in 5 innings - striking out Cron with bases loaded in the 5th to preserve a 5-1 lead and force a decisive game 5. Reyes 2-run HR capped a 4-run 4th that overcame Marwin Gonzalez two HRs. Game 5 - Twins 10, Indians 2. The Indians' defense did not back up one of the best few pitchers in the game in Cassasco. Naquin (Clyde defense 4) failed to make a clutch defensive play on Cruz's line drive but did keep it in front of him for a single. However with bases loaded Rosario's deep drive to right was dropped by Puig, who has a great arm but does make some errors (e3) to score 3 unearned runs and make it 4-1 twins. The big inning also helped wear down Cassasco which led to him only lasting into the 6th, at which point the Twins scored 4 off Otero to make it 9-1, and the 10-2 final sent them to the ALCS to face the Astros. They used balance, with only Buxton and Kepler having two hits and only Sano homering. 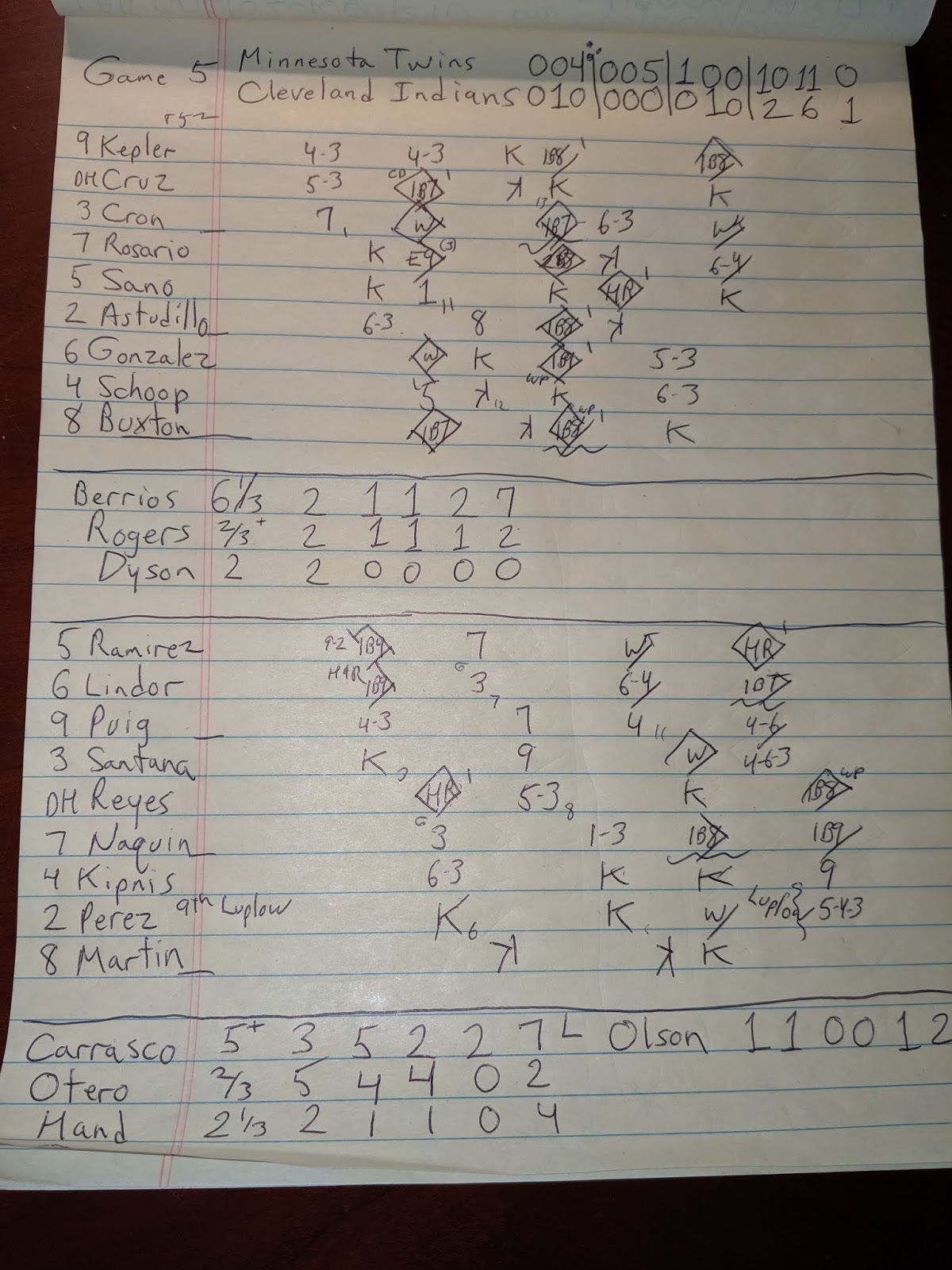 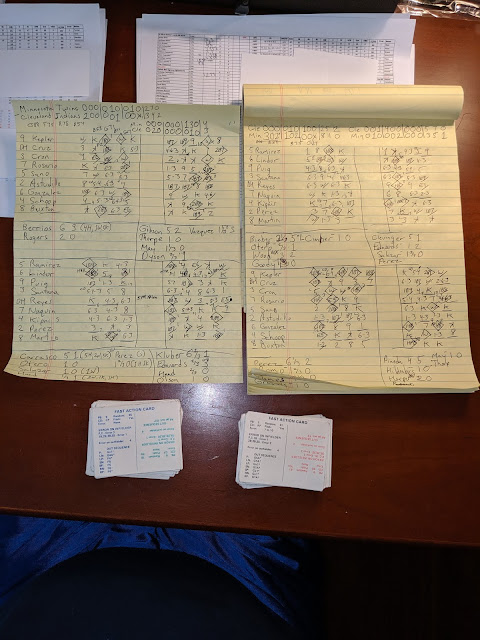 Houston Astros at New York Yankees 5-game Series. Game 1 - Astros 1, Yankees 0. Game 1 went to Verlander 1-0. Bergman appeared to hit a 2-run Homer in the 7th, but despite replay they ruled it foul and he was ejected for arguing (z-play). Pressley struckout Encarnacion to end the game with men on 2nd and 3rd, making Correa's rbi single in the 1st the game winner. Game 2 - Astros 2, Yankees 1. Bregman's HR started a two-run fifth, and Cole alloweed Gregorius and LaMahleu to hit back-to-back singles twice, , but only gave up one run on a solo by Voit in the 6th inning.
Game 3 - Yankees 9, Astros 4.  Astros one-two punch The first team facing elimination, the Yankees destroyed former Diamondback Greinke and relievers, outhitting the Astros 15-5. Stanton, Torres, Sanchez and Voit all hit 2-run HRs - the last one enabling them to rest Chapman so he is full strength for Game 4. Game 4 - Astros 3, Yankees 0.  Miley, pitched like he did until September in real MLB play (No. 3 ERA in AL at that point before collapsing) with 8 great innings before allowing 2 singles and a deep drive in the 9th. Pressley came in to complete the shutout. Loaisiga almost matched him in the matchup of the 4th best Statis-pro cards on each team (Severino was not eligible due to not pitching in actual MLB play). He allowed only an RBI groundout to Bregman in the third before Brantley homered to lead off the 7th and chase him, and Springer rbi single off PB2-9 Green made it 3-0 and send the Astros to the ALCS against the Indians or Twins. 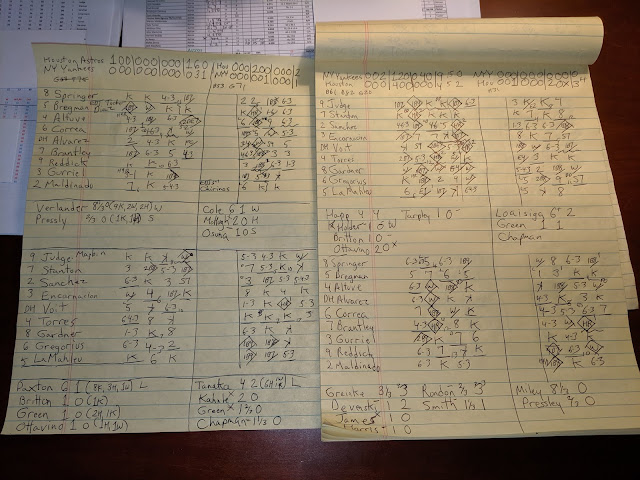 
Below is a photo of the scoresheet of each wild card game and all four Game 1s so that each line-up we are using appears once (minus any platoons, etc.). 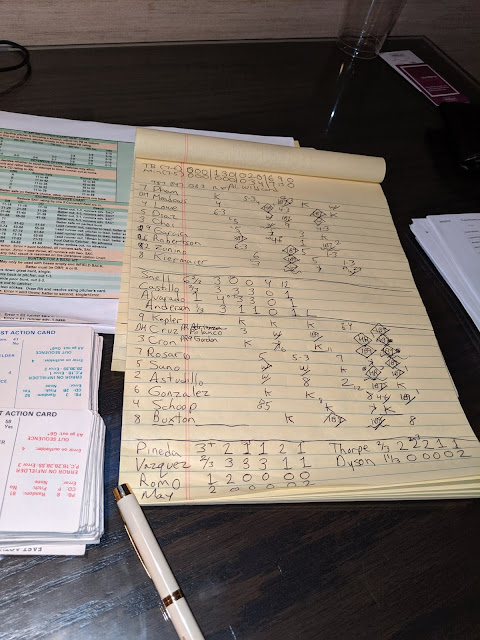 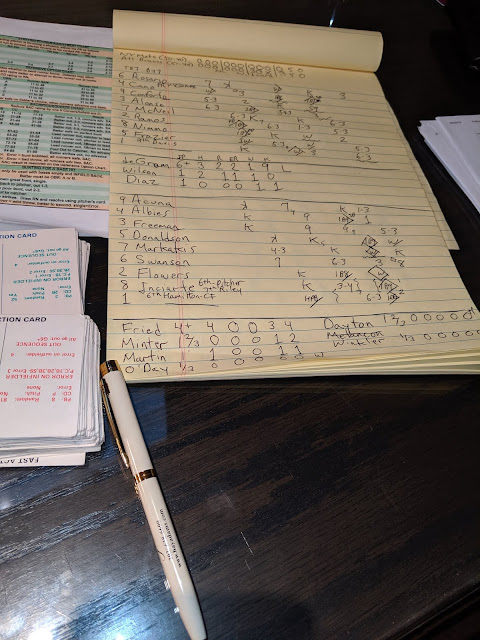 Posted by JohnPudner at 7:59 PM