How to score-record baseball easily (e.g. Dodgers vs. Cubs series)

One of the most visited posts details the quickest and easiest way to score series of baseball board games. The best two NL teams in my simulated "what if noone were injured" season just played and I'll walk through scoring this two game series. Dodgers extended to actual 17 game win streak (see all results here) before Cubs broke it in second game. (Click
http://www.pudnersports.com/2018/05/basic-statis-pro-basic-game-learn-and.html?m=1 to play. 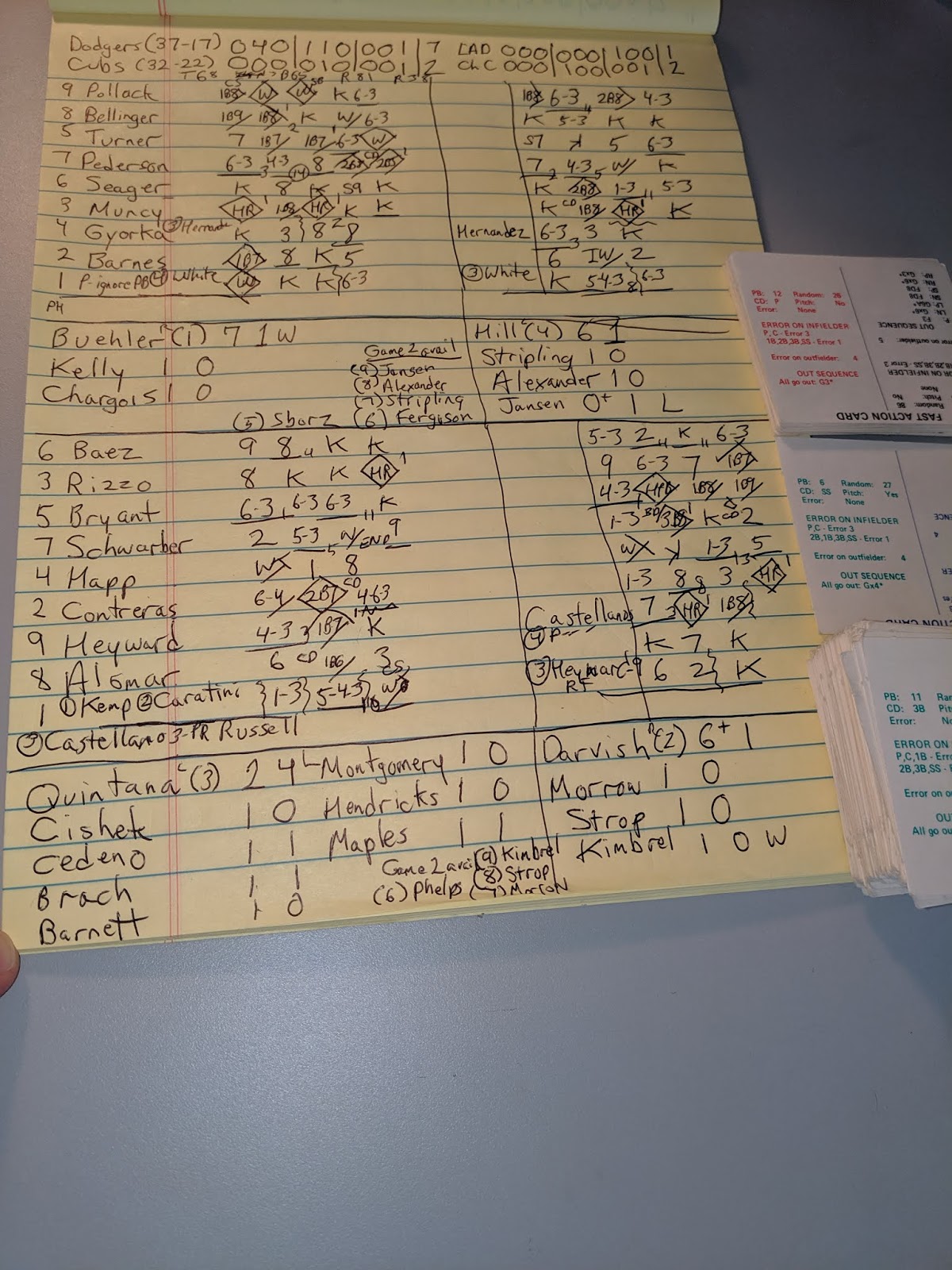 Starting pitchers - note I threw Buehler - (1) means he has the best starting pitcher card of any Dodger, then in the second game Hill (4) - their 4th best pitcher.

In the first game that gave the Dodgers the edge over the Cubs 3rd best starting pitching card - Quintana (3) - but gave the Cubs the pitching edge in the 2nd game - Darvish (2).

In Statis-pro a pitcher's endurance is lessened by 1 every time he allows a runner to 1st on a hit, walk or hit by pitch, any time and earned run scored, and at the end of every inning. Other games have similar ways to track endurance.

After the last batter of every inning, I write a line and then a small number to show how much endurance is used up. When Pederson grounded out to end the 1st inning (6-3 for grounder shortstop to first) a small "3" appears since 2 singles and the inning ended used up 3 of Quintana's his 12 SR endurance, but by the end of the 2nd he used up 14 and had to leave trailing 4-0.

Relief pitching - to make keeping track of who is fresh in the pen easy, I let each team use any reliever they want in the opener with the idea their best reliever would pitch the 9th for a save, second best pitch the 8th for a hold etc. I used to try to track who had pitched in previous series etc - but this let's me keep it all on this one sheet. You can relieve either until the end of an inning or for up to 4 batters - but only in one of two games.

Since Quintana left after 2 IP I went with the Cubs' 7th best relief card in Cishek for the 3rd inning, the 6th best in Cedeno for the 4th etc, but when they were down 6-1 after 6 innings I went to lesser pitchers to save their best 3 for the second game.

Buehler went 7 innings, and I did use their second best relief card in Joe Kelly for the 8th just because I play a run that counts 5 run leads after 8 innings as a 3 game sweep, but if just playing normal rules you would use a lesser pitcher, as I did in the 9th since I play you can't use your best reliever available to get credit for a 5-run sweep BUT you also can't lose credit for a sweep in the 9th.

Once the 7-2 win was over I write the best pitchers available for the second game, so the dodgers had Jansen (for the 9th), Alexander (8)* Stripling (7), Ferguson (6), and a much worse pitching card in Sborz if Darvish did not last 5 innings. The Cubs had their top three available and noted in the bottom Kimbrel (9), Strop (8), and Morrow (7), and saving them in the first game loss proved crucial in winning the second game 2-1 with each of them pitching an inning after Darvish shutout ended with Muncy hitting his 3rd Homer of the series to start the 7th.

For Statis-pro players only I showed the last 2  actualbfast action cards revealed - a PB 12 being the worst possible for a pitcher to leave the ball outside Jansen's excellent PB 2-8 range, then the 26 random number falling in Contrera's home run range.

The other thing I like about this set up is I only write out the lineup once, down the left side of the page, and then I just write any changes in the lineup for game 2 in the middle. I also leave enough room to write in pinch hitters and in which at bat they entered. So Gyorka started at 2nd base and hit 7th for the Dodgers in Game 1, Hernandez (3) pinch hit on his 3rd at bat and then also was the starter for the second game.

Since there are more substitutions for the pitcher's spot in NL games I actually leave an extra spot. In game 1, Tony Kemp (1) pinch hit the first time the pitcher's spot came up, then Caratini (2), then Castellano  (3) walked and Russell (3-pr) came in for him as a pinch runner. One other difference in the way I play 5-run sweeps is that I had Russell try to steal to get in scoring position as the last chance to cut the lead to 4 by the end of the 8th, and he was thrown out. Obviously, if not for my 5-run sweep rule he would have stayed on first to hope for the big rally.

As for the actually play-by-play recording, everyone has their own style, but I simply draw the line to the base a player is on, so that a completed diamond is easily spotted as a run scored. I do have a few quirks that aren't exactly accurate as you would score on an official scorebook. For example:

1) on Contrera's first at bat he grounded to short and Happ was thrown out but he was safe. Really you would put an FC by contreras while drawing the line for him making it to 1st and a 6-4 by Happ going from 1st to 2nd, but I just put the 6-4 by the player who hit the ball, Contreras.

2) note the S9 by seager's 4th at bat to indicate Pederson went from 2nd to 3rd on his deep drive. Note that a batter does not really get credit for a sac fly unless a runner scores from 3rd, but in reviewing I know it wasn't really a sac fly because he dies not have a small "1" for an rbi in the upper right of his batting result but it let's lets me remember that is how Pederson made it to 3rd.

3) also note Pederson has a "2b5" on his last at bat of the first game which in real scoring would mean a double that the third baseman fielded. Actually in statis pro games I play their are some plays that are Clutch Fielding (cd) which means a position player has a chance to make a great play. In this case the third baseman Bryant had a chance at a hard grounder down the line but let it get past for a double - so it would really be scored a 2b7 since the leftfielder would field the double, and my 2b5 actually reminds me the third baseman missed it.

For Statis-pro players only, the little marks under the line score (t68, b65, r81, r38) is just be recording the first random number on each of the 4 sides of the fast action cards to make sure I never mess up in rotating, which usually gets me through a two game series in one shuffle.

I'm assuming anyone who read this far already knows that in scoring 1=pitcher, 2=catcher, 3 = 1st baseman, 4=2nd baseman, 5=3rd baseman, 6 = shortstop,  7 = left fielder, 8 = center fielder and 9 = rightfielder both by each player in both lineups and in recording who field the ball on each play.

That makes the Dodgers Statis-pro best 41-19 record, and the Cubs keep the NL Central best 34-26.

Right now the one difference in the playoffs between the Statis-pro season and actual MLB season is that the Phillies would make the playoffs and the Cardinals would not.

Right now the NL East Nationals, Braves and Phillies are virtually tied and would claim the division plus both wild card spots in statis pro.
The Phillies are better in Statis-pro because we ignore injuries so McCutchen and their top 3 relievers are used in Statis-pro.

However, the Cardinals have been my hottest team since starting 6-18, winning two thirds of their games since to get to 30-30 and within a couple of games of the NL East teams.

My AL Statis-pro season is over, and the Red Sox and Rays will have a one game playoff, and if the Rays win it would be the same 5 playoff teams as if thr MLB season ended today.

The Astros and Yankees won the Statis-pro wewt and east and seem to have those MLB titles in hand.

The Indians are better in Statis-pro due to great starting pitching cards for Carrasco and Kluber being used despite their long injuries in MLB. In MLB, they would make the wild card but are a couple of games behind the twins for the division, but in statis pro they finished tow games ahead of the twins, so twins will host the wild card statispro game.

Posted by JohnPudner at 2:22 PM