We finished our simulated MLB season a little ahead of the real season to see how it might play out. This blog covered previous games in our Statis-pro 2019 playoffs. The summary of both League series start at the bottom of the blog with Games 1 and 2, then works up so the latest game is at the top of this blog. You can play your own games for free with dice and by clicking here to print off rules and basic players, and if you like the basic game click on the really cool advanced cards.

The League Championship series ended with similar scripts, as both road teams won Game 6 to force a decisive Game 7, and then jumped ahead in Game 7 only to see the bats of both home teams erupt late for come-from-behind wins. I know the MLB execs will hope for a Yankees-Dodgers World Series in the real game, but both were upset in our Statis-Pro simulated games - the Dodgers even though they set an all-time Statis-Pro record for me with 17 straight regular season games.

NL - Games 6/7 - Braves 6-3 then Nationals 6-1. In Game 6, Keuchel proved the playoff acquisition the Braves hoped with seven scoreless innings, and the Braves took  a 6-0 one homers by Acuna, Albies and Swanson, and a rare hit and run triple by Inciarte. Only a 3-run homer in the top of the 9th cut the final to 6-3, but it did also force the Braves to bring in Minter for the Save rather than keep him fresh for Game 7. In Game 7, Scherzer gave the Nats the edge, but Freeman took him deep in the first inning for a 1-0 Braves lead. Scherzer worked through seven innings with only that one run allowed, and a double by Robles and single by Soto in the 3rd tied the game. However, in the 7th and 8th Martin and Melancon could not hold the tie, as three of the first six batters they faced - Cabrera, Suzuki and Soto - homered to send the Nats to the Statis-Pro World Series with a 6-1 win.

AL - Games 6/7 - Twins 6-3, then Astros 9-5. The Statis-Pro Game 6 resembled the actual Rays-Astros Game 2 the night before with Osuna struggling to hold a lead. He gave up two singles and then a 3-run homer to Sano and former Astro Gonzalez added a solo HR off Rondon to force a Game 6 in a series in which (much like their actual series against the Yankees) the Twins looked completely overmatched in 7-0 and 7-1 wins. Perhaps Twins fans can hope for a similar turnaround against the Yankees in Games 3 and 4, but their starting pitching does look week - there were lucky in their draw in Statis-Pro as the Yankees and Astros played each other first while the Twins barely beat the Rays and Indians. In Game 7 the Astros were in even deeper trouble than the Nats, as Sano hit another 3-run HR in the first and Rosario added a 2-run homer in the 5th to make it 5-1 Twins. However Altuve had 4 of the Astros 13 hits as they exploded for seven runs in the 5th and 6th inning. One of the 13 hits was a hard grounder down the first base line and Cron failed to make a clutch defensive play (CD) to let it get to the corner for a 2-run double that capped a 4-run 5th to tie the score. Almost certainly rookie of the year Alvarez (whose projected card is great but not nearly as good as his actual stats in MLB) capped a 3-run 6th with a 2-run HR as the Astros comeback left them in the World Series against the Nats. 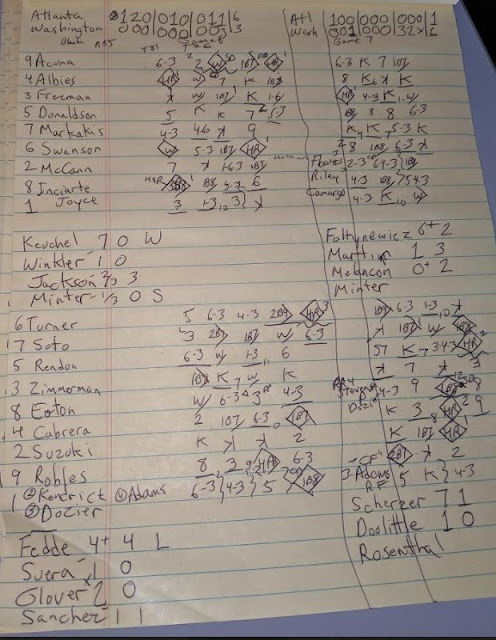 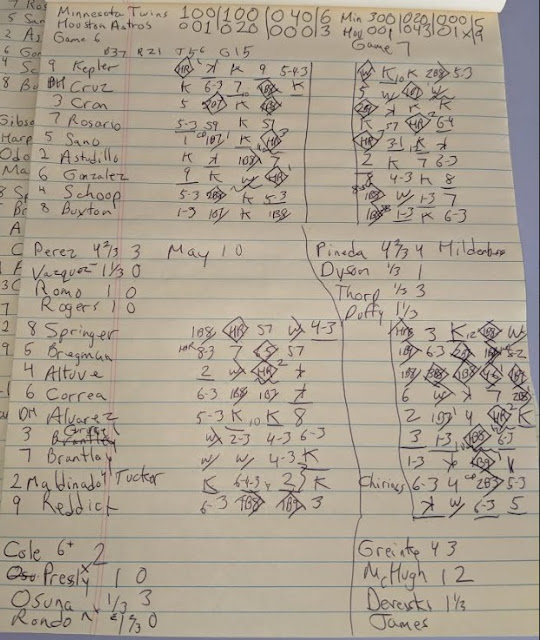 Summaries of Games 3, 4 and 5 in parks of underdogs

NL - Game 3 - Nationals 2, Braves 1 in 12 innings. The Nats continued to play with fire despite dominance, almost wasting 9.2 innings of 2-hit ball by Scherzer despite outhitting the Braves 9-3. The Nats left the bases loaded multiple times for the second playoff game, but after striking out his first 5 at bats Turner doubled and stole 3rd base with no outs. Despite the infield being in a Z-play resulted in Donaldson knocking down a grounder by Soto and could only get the play at first in the top of the 12th. Until then, the only scores until then occurred on Rendon and Markakis trading HRs. The Nats now lead 2 games to 1. Game 4 - Braves 4, Nats 0 - Fried outdueled Strasburg with a rare complete game shutout. Albies clutch double in the 3rd made it 2-0 Braves, and Donaldson's 2-run single in the 8th gave the Braves insurance to tied the series two games apiece. Game 5 - Nats 3, Braves 1 - Corbin struck out the side with bases loaded and no outs in the second and Rendon (elite clutch defense 5) made a spectacular play in the 8th to preserve the lead. Soto hit a 2-run Homer and sengled and scored for the final margin to give the Nats a 3 games to 2 lead as they face Keuchel in Game 6 but would have Scherzer in Game 7 if needed.

AL - Game 3 - Twins 2, Astros 0. After having to start with the 3rd and 4th starters in two blow out losses in Houston, Staris-Pro Ace Pineda threw 6 no hit innings and threw a complete game shutout with no Astro reaching 2nd base. In the 8th inning Buxton hit a 2-run HR off Osuna to pull the Twins within 2 games to 1 in the best of 7. Game 4 - Astros 6, Twins 5. in the only game in which they did not have a pitching disadvantage, the Twins rallied from down 5-0 to tied the game by the bottom of the 8th on Sano's 2-run Homer. However an error on former Astro Gonzalez to start the top of the 9th put Reddick on first, Springer's single to right moved him to third, and Bregman's sac fly made it 6-5. Pressley wrapped up the save. The Astros go up 3 games to 1. Game 4 - Twins 3, Astros 2.-
Trailing 2-0 to Verlander and 8 outs from being eliminated, former Astros Gonzalez hit a Homer to make it 2-1 and chase Verlander in the 7th. Kepler then tied it in the 8th on a single by Rosario that skipped under the blove of left fielder Brantley and Buxton was the hero with a walkoff double in the 9th. The Twins pull to within 3 games to 2. 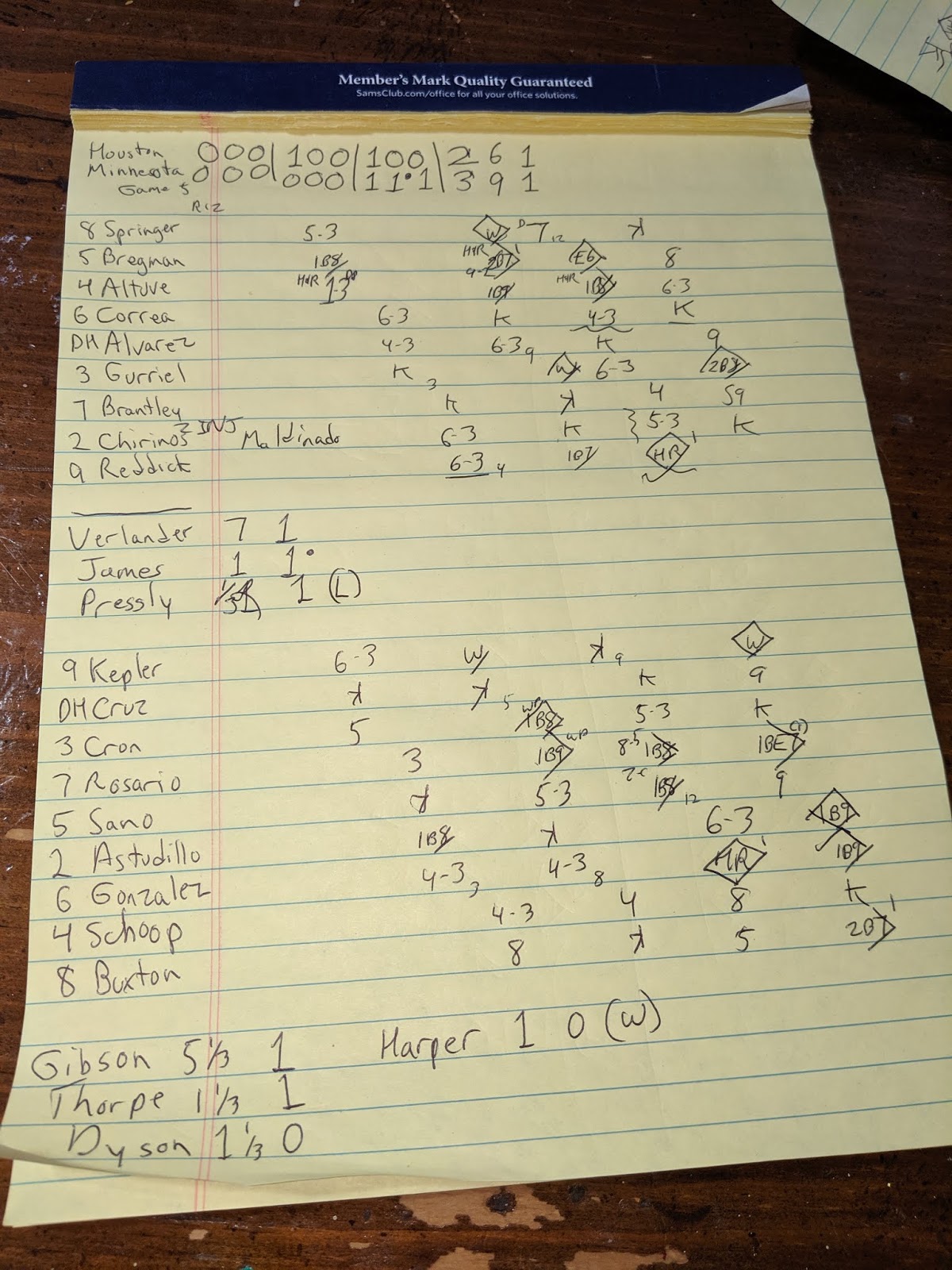 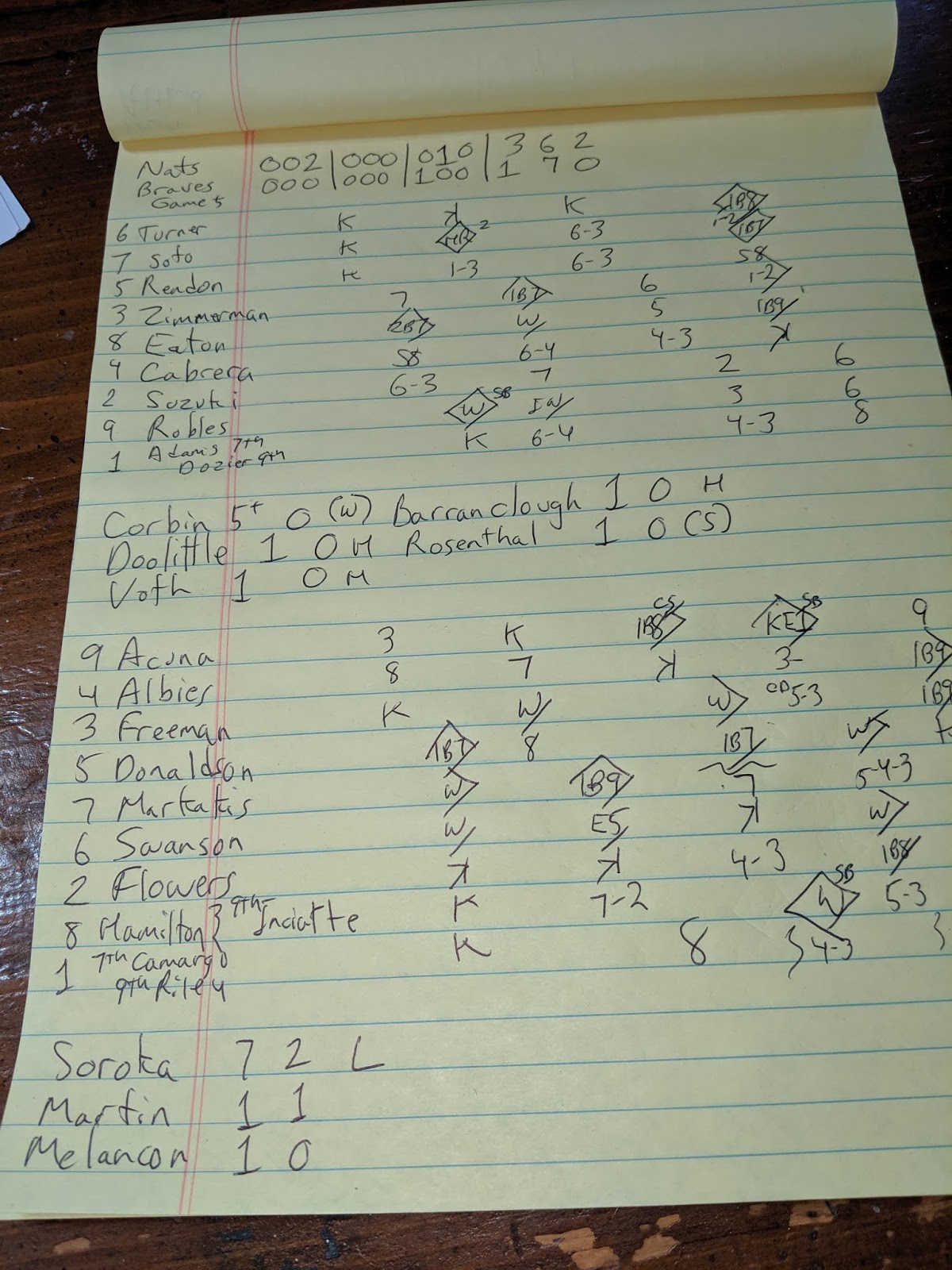 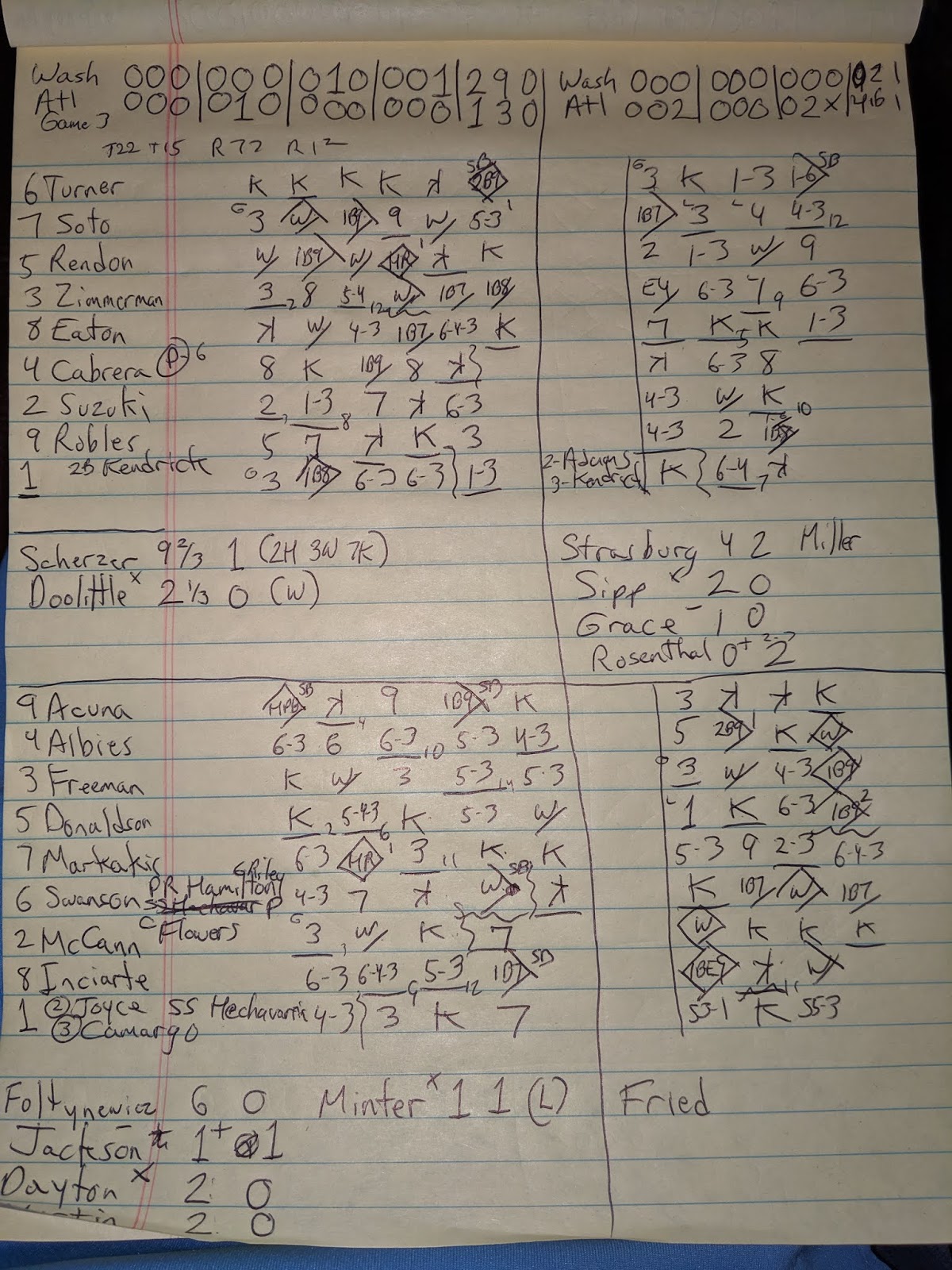 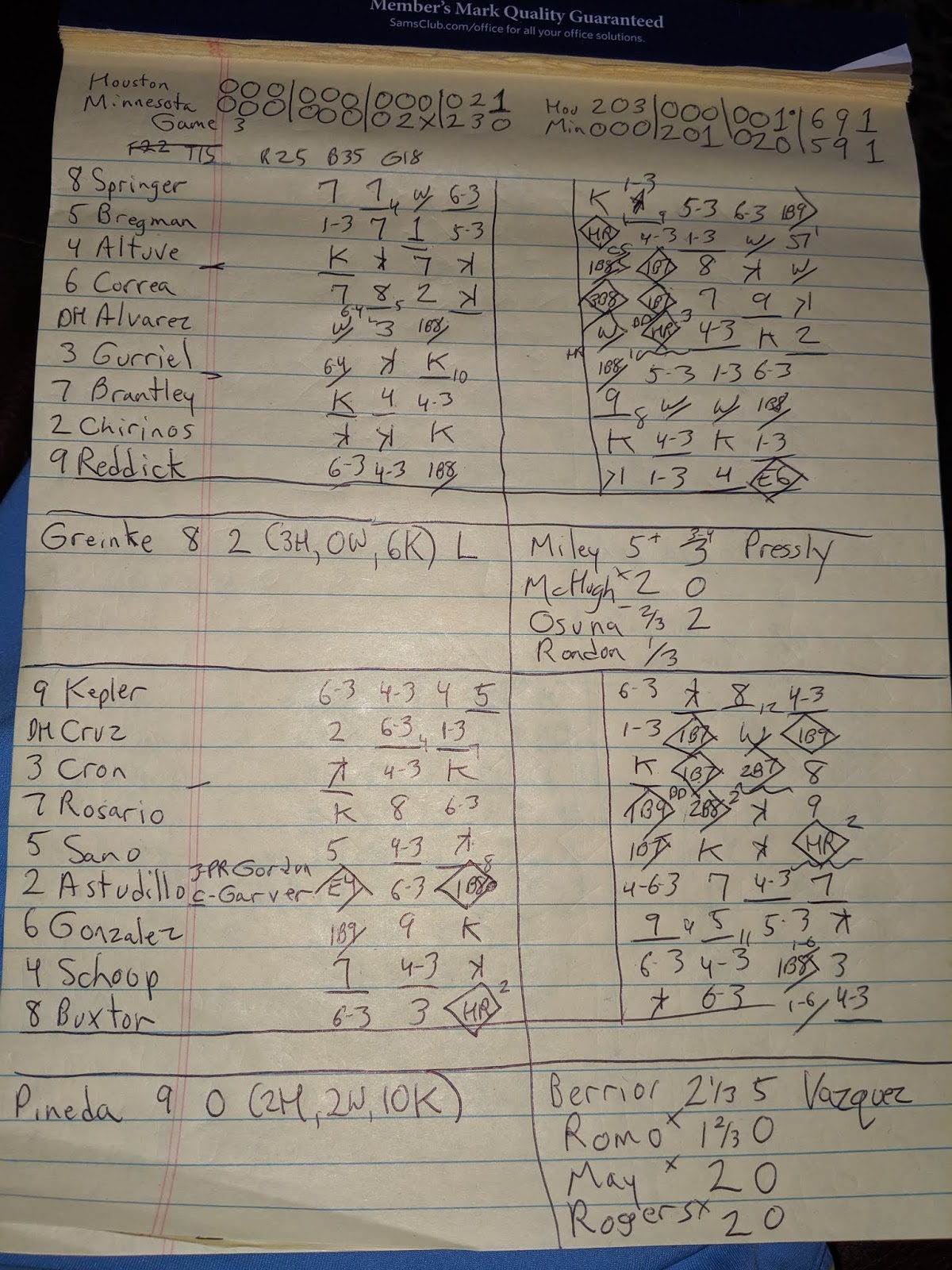 Summaries of Games 1 and 2

The two teams with tired pitching due to needing to go five games to win their last series (Twins and Nationals) each lost Game 1 of their League Championship series to the teams the wrapped up series in four games.

NL - Game 1/2 - Braves 6-4, Nats 6-4. In Game 1 the Nats actually outhit the Braves 12-9, but left bases loaded in the 5th, 6th and 7th to fall 6-4. In Game 2 the Braves jumped ahead 4-0 when Albies, Freeman and Swanson all homered off Fedde, but the bullpen could not hold onto Keuchel's lead. The Nats sent 11 to the plate in a 5-run 5th on homers by Kendrick and Soto and doubles by Turner and Zimmerman. Scherzer, Strasburg and Corbin will pitch three games in Atlanta before games 6 and 7 come back to Washington if necessary.

AL - Games 1/2 - Astros beat Twins 7-1 and 7-0. Correa (who the Astros hope is really healed for the playoffs) had two doubles and a single for a 7-1 win in Verlander's 2-hitter. In Game 2 Cole was even more dominant, setting down the first 21 Twins before Rosario broke up the perfect game with a single to lead off the 8th. Cruz doubled in the 9th but Cole finished with the complete game shutout. Springer's clutch 3-run Homer in the second was only made possible by an error by the pitcher Perez earlier in the inning. 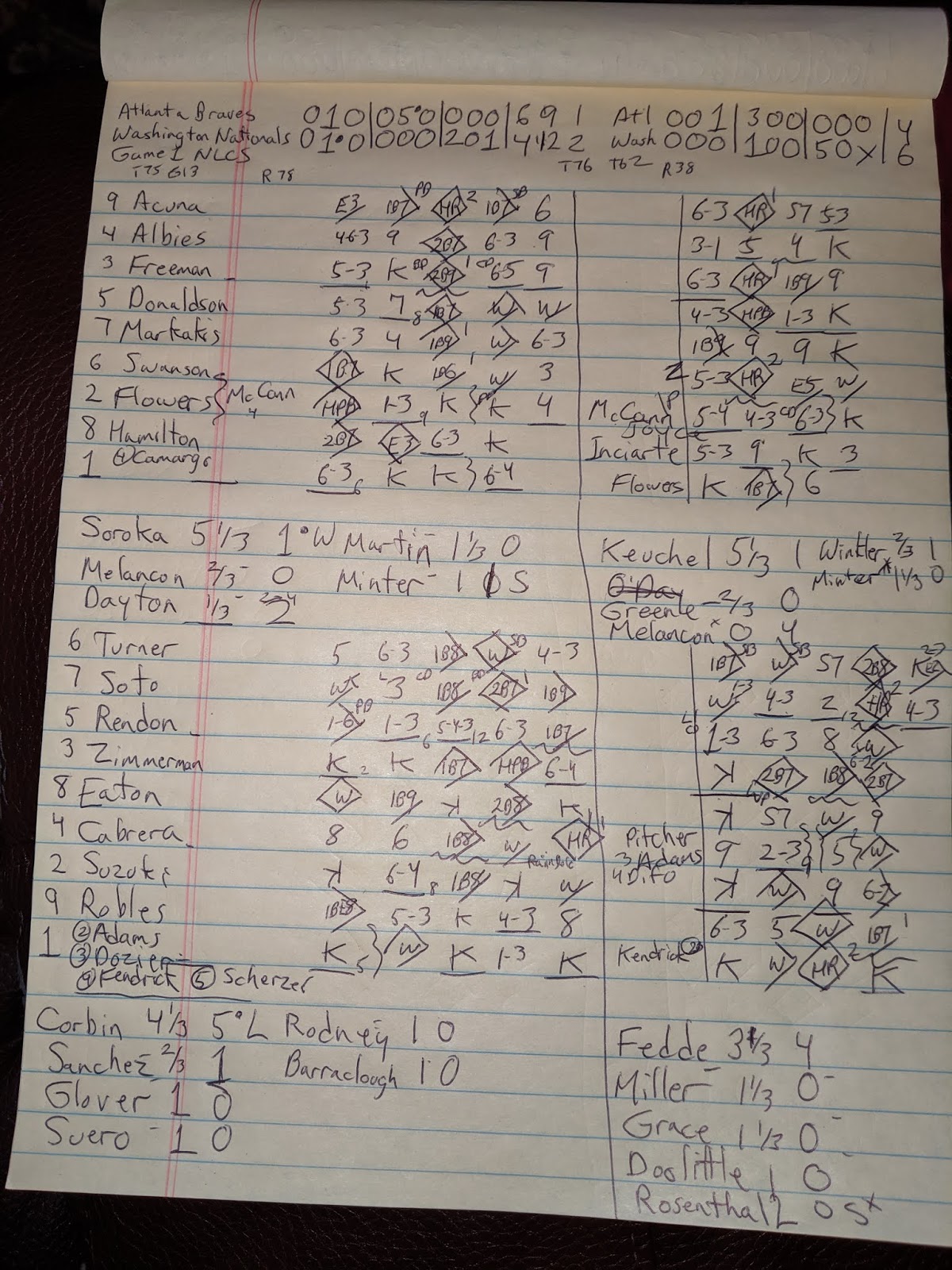 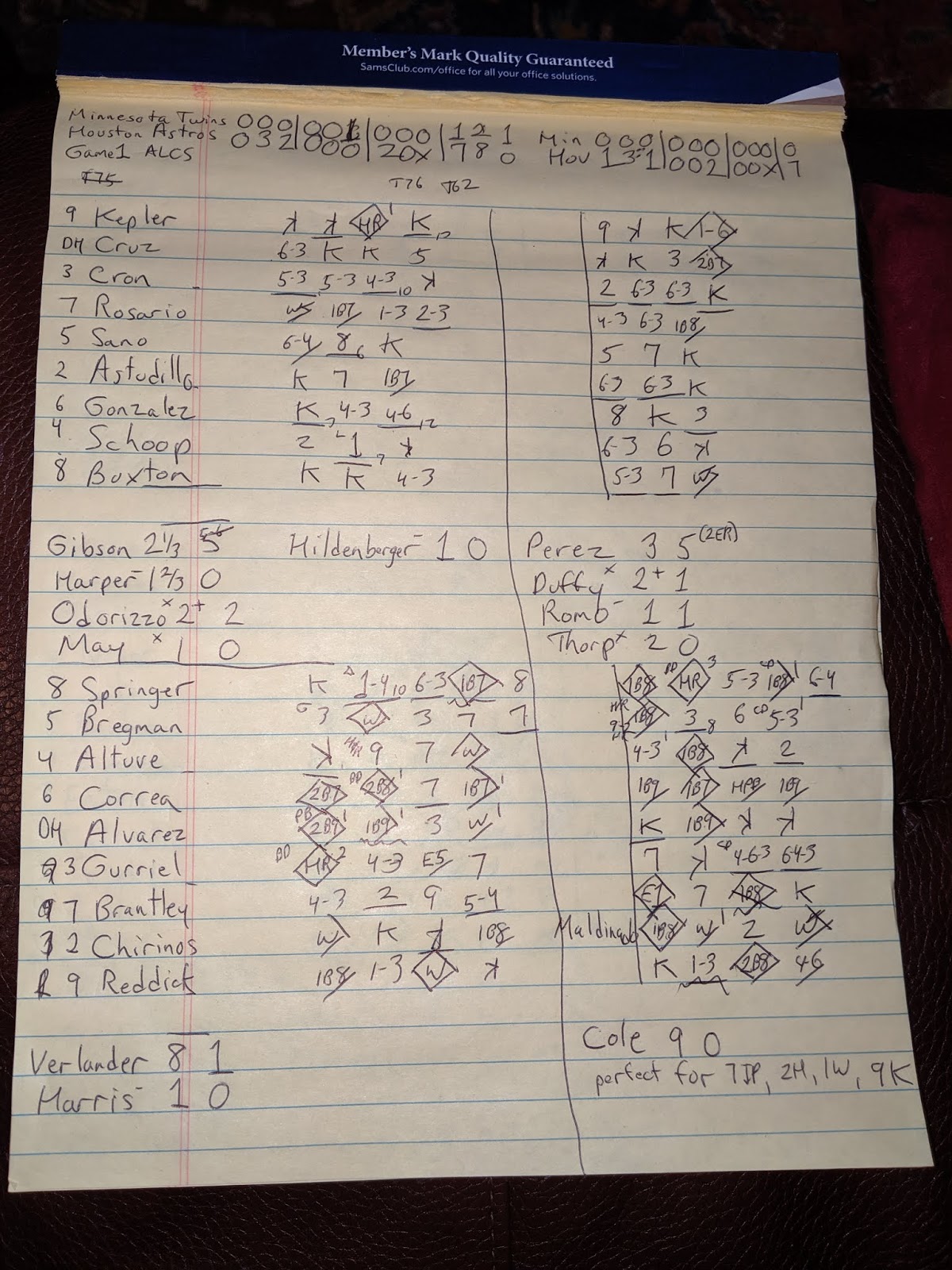 Additional games of the best of 7 will be posted as they are played.
Posted by JohnPudner at 7:36 PM