As I complete my 2019 Statis-Pro season, I wanted to use updated fielding stats for each player based on this year's season. I list the clutch defense, throwing and error ratings for all 1,345 MLB players this season below in alphabetical order by team, but first I will run through how I calculated each rating. This information is also in this google doc.

Note that if you are using Advanced Cards the ratings will already be accurate, but the basic cards using double plays to determine a CD of 1-5 are terrible. For example, Betts, Bellinger and Kershaw should all be CD5 as gold level fielder's, so the basic cards really need to be updated.

The first rule is that Gold Glove nominations overrule all fielding calculations for me. The players who are nominated for a gold glove are the CD5 (or corresponding letter in Advanced) at that position. Since there are so many more pitchers than nominees, any pitcher with a gold glover nomination in the last four years is a CD 5.

For the error ratings, I still use the original charts except for removing the one point disparity between third baseman and most other fielders, and requiring minimum innings played to get certain ratings: 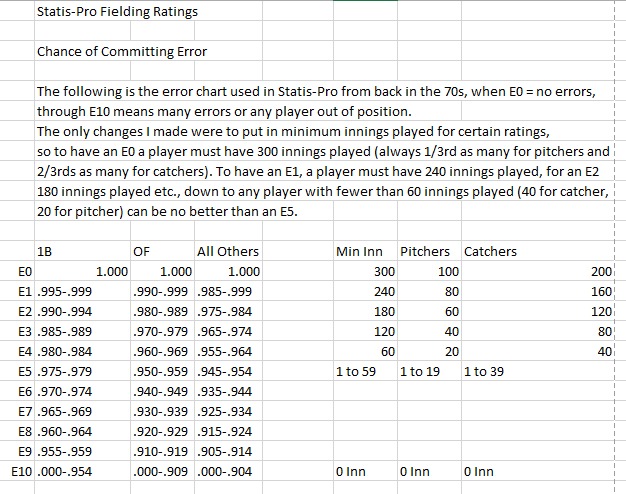 As for the Clutch Defense and Throwing Arms: 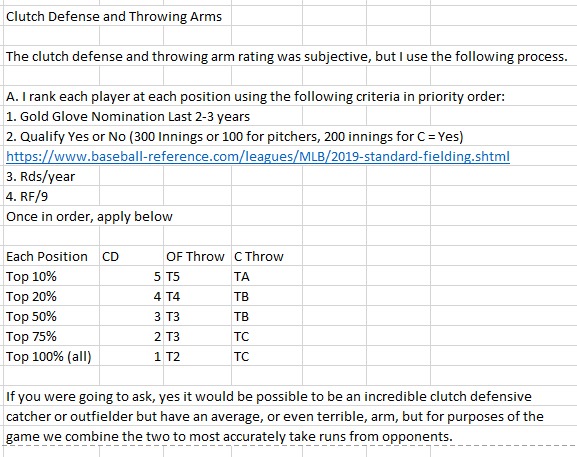 Through games of September 3, that leaves me with these ratings for all 1,345 players, which I am using as a separate print out whenever a fielding rating is needed. First, here are the team averages from best to worst. The Padres top eight players average a 4.13 Clutch Defense Rating out of a perfect 5, while the Pirates have a 2.5 which is below the 3.0 average player with 1 being the worst possible. The Braves are the second best fielding team, tied with the Reds, Nats, Indians and Giants with a 3.88 average Clutch Defense but committing fewer errors (only the Rays match their average error rating of 1.38).

Then we go to each player: