The three day weekend let us get every NL team to at least 60-game records, and the last match-up featured the Miami Marlins scoring a first game sweep over the Pittsburgh Pirates (5-run win) behind their ace Yamamoto (a PB 2-6) to drop the Pirates to 23-34, only two games ahead of the Marlins worst record in the NL. However, the Pirates' Musgrove and their very tough set-up, closer combo of Kela and Vazquez with a 2-run HR by Marte pulled off the finale 3-1.

After the 60 game records, I drop the 5th place.team in each divisions, so both teams plus the Rockies are done in my season.

The sweep in the first game still gave the Marlins their first series win - officially 4 games to 2 - in 10 Statis-Pro series this year. I know, some Statis-Pro games are being played between the 1927 New York Yankees and 1975 Cincinnati Reds (see Facebook here) - but I get to put pitchers on the mount with PB: 2-4 - meaning the batter gets a chance to drive the ball 5 out of 6 times - when I play the bottom teams of the year.

We are enjoying getting to play using all the 40 man rosters (available in this google sheet) As noted below, and in the tracking sheet of all records and games played (click here), the Braves, Cubs and Dodgers lead their divisions, while the Phillies and Nats would meet in the wild card right now (see "0" by both in last column for zero games back in WC race).

The Mets and Padres are two games out of the wild card, the Giants three, and the Diamondbacks and Cardinals four. Those NL West teams must try to get a wild card spot because all are at least 9 games behind the dominant Dodgers.

That will put the remaining 12 teams all with 72 game records (24 actual games left).

After those 8 series - time permitting - each of the remaining 4 teams in each division will play the other 3 remaining in their division for a second series - a total of 18 more divisional regular season series for me - to all finish with 90-game.records (30 actual games played).

Then we go to the playoffs.

Here is the 2-game scoresheet in the battle for last place. Note an E5 in the seventh would have ended the inning with a double play and 1-1 tie - but instead Rojas hit a grand slam two batters later to cap a 5-run inning the gave the Marlins the sweep. 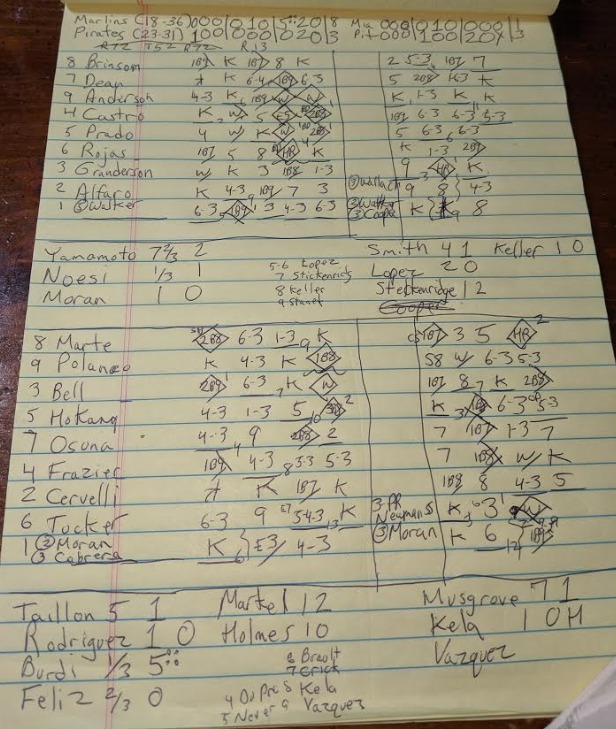 We just managed 60-games total in our AL season last year, but some NL teams are already past that mark in the tracker.