With my Value Add Basketball Game season wrapped up and my graphics guy close to producing updated visual files for player cards, I'm finally turning to Statis-Pro baseball. I am keeping it simple this year as I play with current MLB rosters. Whether you order Advanced Statis-Pro cards or basic cards, I would keep a simple this basic card on hand to add a batter or pitcher you on an MLB roster but who does not have a card because he is a rookie, or was injured last year.

I have spreadsheets for inventing a card for a key player, but for starters I don't want to run out of pitchers or hitters. For example, in my season opener the Red Sox were beating up on the Orioles and I wanted to use Alex Cobb to eat up innings and save some of the pen for the nightcap. Cobb did not have a card because of injury, so I went to FanGraphs, saw his projected ERA was 4.90, printed out the card to the left and say that the 4.90 makes him a PB 2-4 and he pitched. Same with a batter, just look up his projected OPS and adjust the Home Run Range from 26- based on the note and you have a filler player. 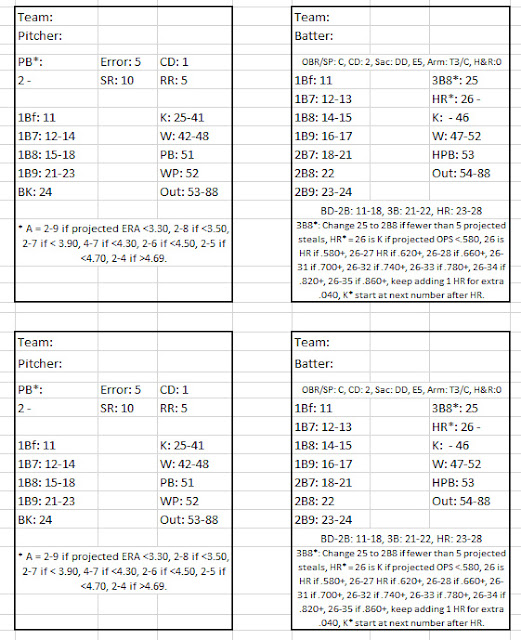 Every week 70 or 100 clicks on the rules for the dice version and players I created last year in spreadsheet form - and here are my quick rules for my league play.

Use 2019 cards from players currently on MLB rosters. As an example I used basic cards rather than the at superior Advanced Cards just because it's easier to see what I wrote on them in this photo. Player Cards were available for all 25 players on the Red Sox roster depth chart except Ryan Weber (injured last year) and 21 year old shortstop prospect Jonathan Arauz. Zips projects Weber with a 5.82 ERA so I just wrote in the PB 2-4 on a replacement pitcher card and it projects Arauz OPS as .613, so he is in the lowest range and does not get am HR, just a 26-46 strikeout range. 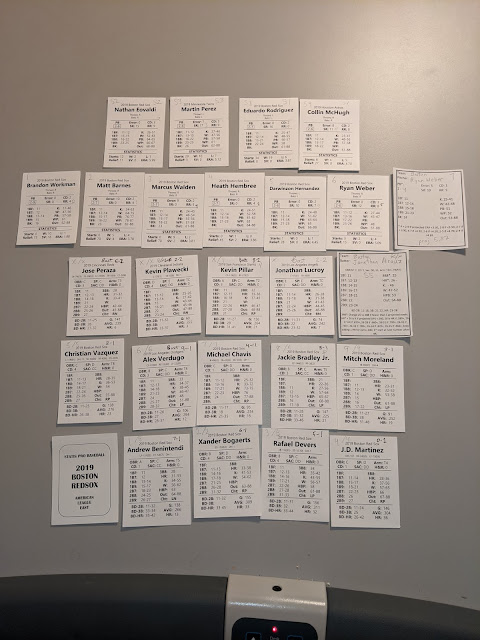 My season started with the Red Sox beating the Orioles 10-1 for a sweep, then the Orioles rallying for a 5-3 win. Therefore my standings are: