In my first match-up of division leaders, the Dodgers defeated the Braves 5-3 and 3-2 to hold by far the best record in my NL Statis-Pro game at 32-16. While many play the great Statis-Pro Advanced all-time series with more focus on each game over time to replay perhaps one great teams entire 154- or 162-game season, I use several steps to get in as many games as possible in short period of time to have a little truer test.

The steps I used are below the photo of the actual condensed scoresheet of the Braves-Dodgers games (click here for projections of all 2019 players). 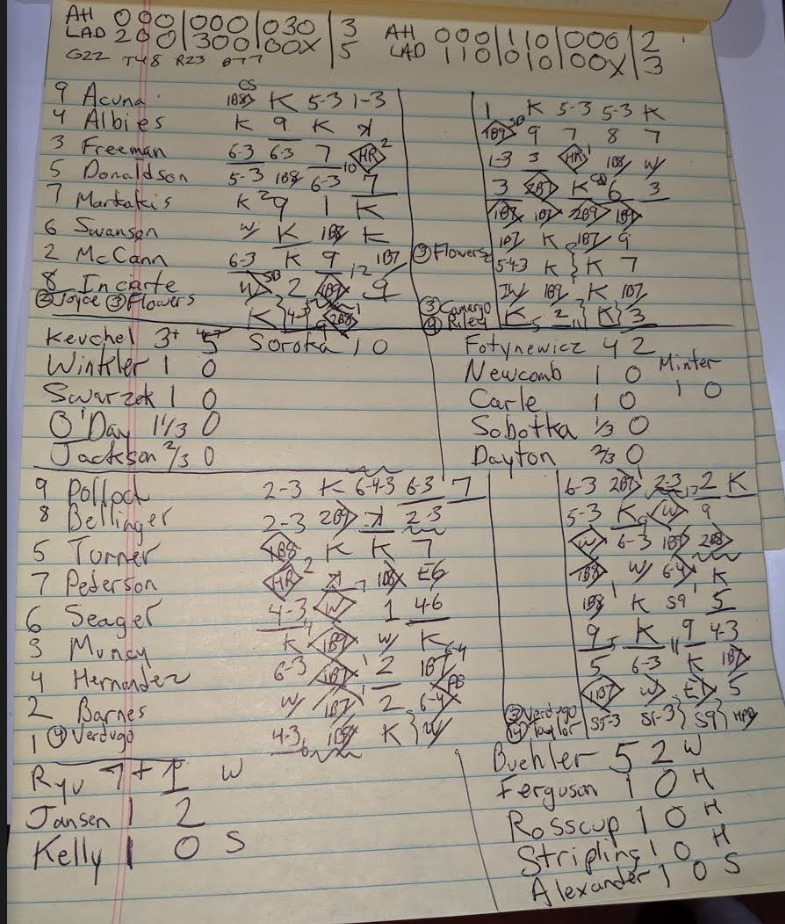 1. I always play 2-game series so I just write the line-up, shuffled my 4-sided Fast Action Cards once, and get in two games (or you can use dice of course).

2. Because teams have a 14% chance of a sweep in a 3-game series and 14% chance of winning a game by 5 runs I could each games as either a 2-to-1 win for the winning team, or they can get credit for a series sweep if they lead by 5-runs or more after the 8th inning WITHOUT using their best reliever available (some trial and error here, but bringing in the closer to hold a 5-run lead OR letting a team hit in the bottom of the 9th to try to get a 5-run lead both mess up the spirit of the game).

3. I use a 4-man starting rotation and each team starts either their 1st and 4th best pitcher or 2nd and 3rd best in each series so that even if one team gets ahead of another in games played they are both still using fairly "equal" parts of their rotation.

4. I only let relievers pitch in one of two games - another example of the above where Jansen and Kelly (the Dodgers 2 best relievers) were used to preserve the first win, so were not available in the second game. Then I typically just count down so the best relievers still available will be available for the 9th inning. So with those two gone and Buehler lasting 5 innings, the 4th best pitcher still available (Ferguson) pitched the 6th, then the 3rd best available (Rosscup) pitched the 7th, Stripling the 8th, and then the one other PB:2-8 in the pen - Alexander - pitched the 9th of Game 2.

5. I only let each reliever pitch one inning OR up to 4 batters in one of the two games. You obviously want to use the best pitchers as much as you can and there are great ways in the advanced game to decide on rest, BUT to get in volume of games this lets you see who was used in Game 1 of each series and not use them in Game 2. You can bring in a pitcher ahead of his inning to get out of a jam but unless he induces a double play as his only batter faced in one inning and then gets three straight in the next inning for a 1 2/3rd inning start, you are playing with fire because he may not be able to finish closing a game and then you end up with a lesser pitcher in a jam. My projected cards include any player who plays or is projected to play any measurable time in the current season, so you should have plenty of extra projected pitchers and pinch hitters to add to your set of cards even for a marathon extra inning game.

6. I leave a space between the two games to allow for platoon changes in the line-up or to mark pitch hitters. The 3 by Vedugo means he actually hit the 3rd time the No. 9 pitchers spot was due up, and the 4 by Taylor means he hit the 4th time.

7. In playing the current season in addition to the players from the past year, I do keep simple staple cards you can calculate based purely on projected ERA and OPS to change only the home run range to plug in a new surprise player like Alvarez for the Astros (click here for projected cards of all 2019 players including new ones). The disadvantage to this sheet is it lists only ranges for singles and doubles, unlike the cards that tell you if the hit goes to the infield (1Bf), left field (1B7), etc. When using a projected card for a new player without these ranges I just use the following:

8. I only have injuries last for the rest of the game, but because I am using projected cards you don't get ridiculous ones for a player who only played a handful of games.

9. Since I do not actually calculate Clutch Batting (BD) ranges, I just convert the following on the offensive card: 1B becomes a base clearing 2B, 2B become Home Runs, all OUTs (but not strikeouts) become Deep Sac flies with all runners advancing, and I draw a new number if the first one was a Walk or Hit by Pitch - with all other results (3b, HR, K) staying the same.

10. Because the projected cards do not have a breakdown for facing left handers or righthanders, use the basic game adjustment of 88s turning into hits if it is a right-hander vs. left hander in either combination, an 11 turning into a strikeout if right vs. right or left vs left, and then a 12 also an out if left vs. left.

I realize some of this goes in the opposite direction of the great advanced rules that keep improving the game when playing the all-time teams where the roster is set and you know what players you will have in place for the whole year. But for any who do like trying to keep up with current rosters for some of their games, it gives the ability to get a more realistic test in a shorter season I believe.

For whatever it is worth, here are my standings so far this season in the balanced NL where it seems the only near certainty is that the Dodgers will win and the Marlins will lose any given series. (the standings continued to be updated on this google sheet with a line on every game played).