The last thing the four National Champions competing in our greatest ACC teams of the century tournament needed was Carmelo Anthony and his 2003 Syracuse national champions. With every other team splitting their first two games except for 0-2 Georgia Tech (2004), first place came down to a showdown between Jon Scheyer's 2010 Duke Squad and Carmelo Anthony and company.

Duke led until 10:19 to go in the game, when Warrick drew a crucial 5th foul on Singler and hit a free throw to make it 62-61. Despite Miles Plumlee coming off the bench to finish the game, Syracuse's Duany hit a 3-pointer with 1:15 to play to make it 82-79, and it appeared over when Duke had to foul McNamara and the 90% free throw shooters drained them both for the 84-79 lead. However Duke's Zoubek scored at the other end and drew a foul, and then hit the free throw despite being only a 55% free throw shooter (1-11 good, 12-20 miss on the dice). Scheyer then hit a game-tying shot only to have Duany hit a buzzer beater.

Here are the top five in each category we track in the game, which you can play for free here.


Every team has shown the ability to explode and score, and because the ACC is so loaded I am giving them four spots in the tournament while the others all get just the 1st and 2nd place team. All six champions get a huge advantage because they start in the Elite 8, while the other teams must win back-to-back playoff games to reach the Elite 8.

Therefore even though that one last shot by Syracuse dropped Duke from 1st to 4th in the ACC, they would still be in the tournament with UNC 2005 and UVa 2019 if it started today. 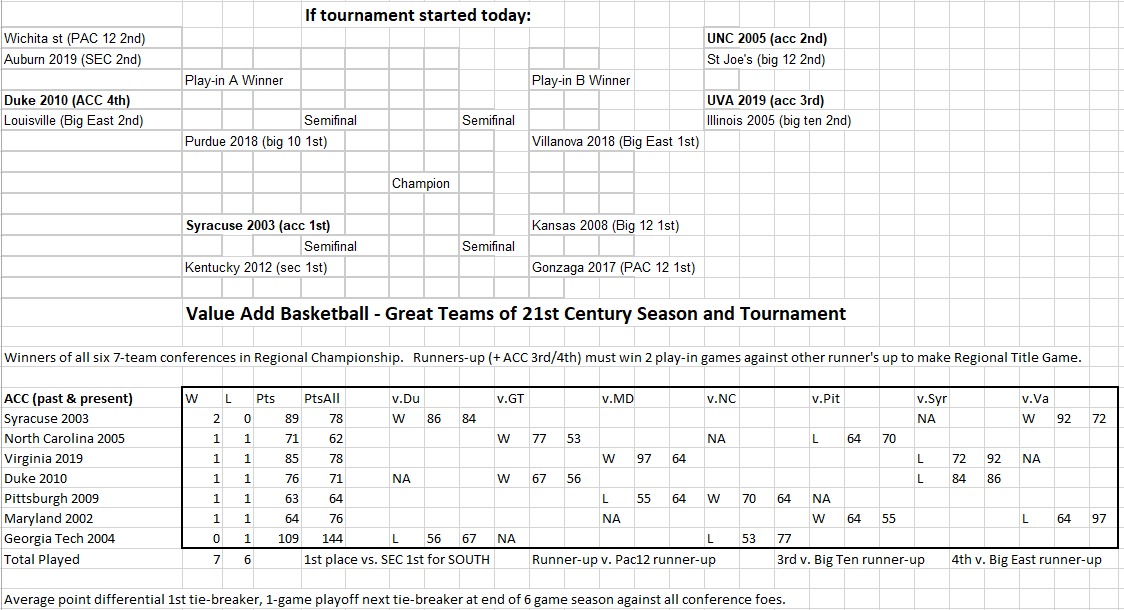 Below are the first seven box scores. While the columns look a little funny to the right, that is because the information there is intended to show people playing the game the suggested positions as well as which of the 44 posssessions we usually play each player.