Scroll to the bottom for results of the Big 12 vs ACC national championship game - a rematch of sorts from UVa vs Texas Tech. 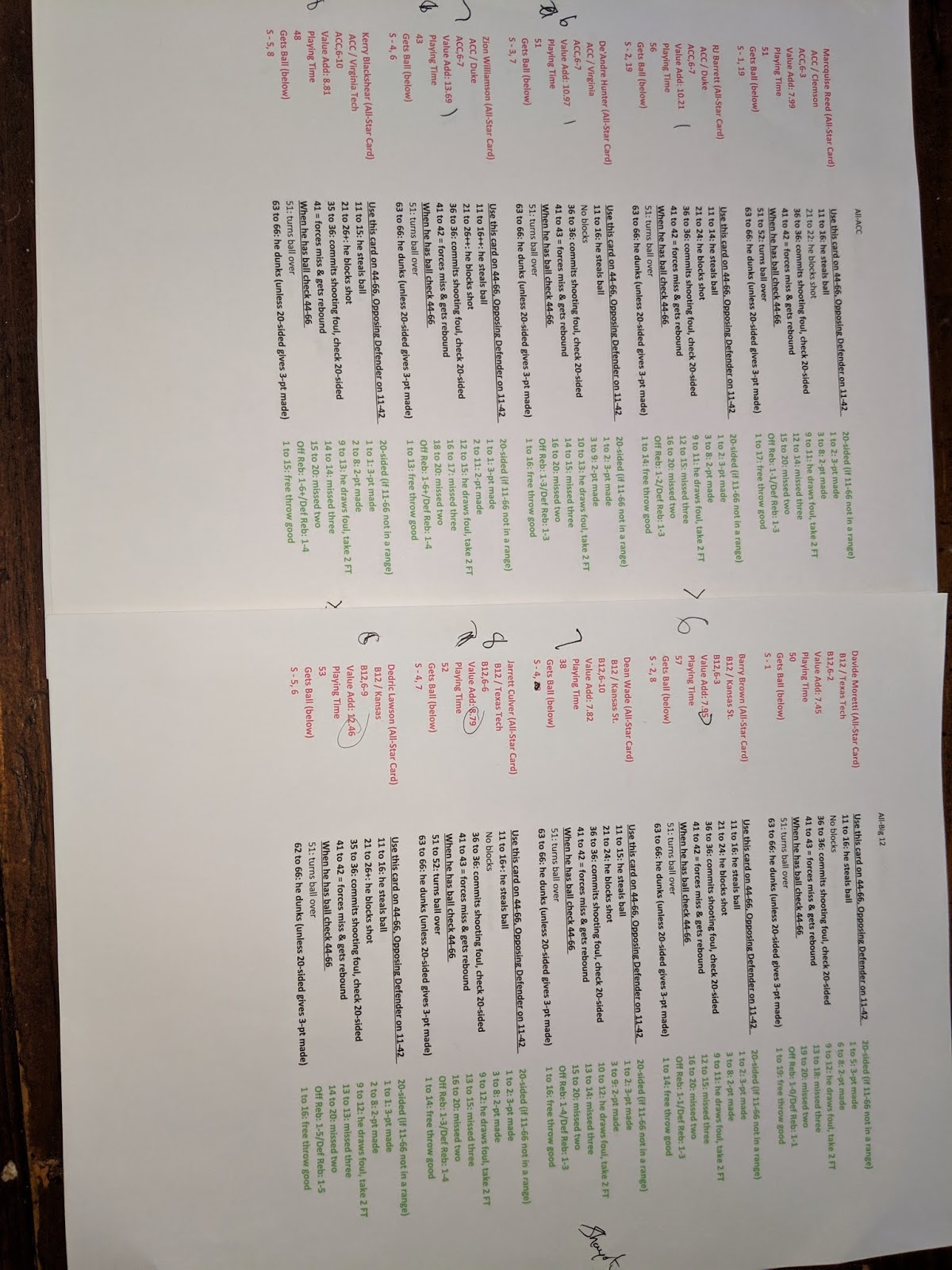 In the NCAA's 3-on-3 All-Conference tournament the Colonial Athletic Association (CAA) was the surprise National Champion - winning all seven games. The Midwest Region championship in the game pitted the CUSA against the MAC, two teams that narrowly missed winning the actual live 3-on-3 all-conference championship - both losing to the eventual champion CAA by two points.

The CUSA won the Midwest by an average of 6 points to get there, their next opponent the ACC averaged winning by 21 to win the South.

The other 1-seed to win their Region, the Big 12 (West) also faces a surprise team made up of players who shocked the big conferences this post season. A Lipscomb team that was snuffed for the NCAA tournament, took it out on NC State, Wichita State and Davidson in the NIT to make it all the way to the title game against Texas - another team which should have been in the tournament. The Liberty team that beat them for the ASun title shocked Mississippi State and then led Virginia Tech before finally falling.
Three players from each team combined in our game on the ASun All-Star team which combined lots of great three-point shooting with a Liberty's dominant center James underneath to have just enough for an upset of the 1-seed SEC for the South Region Title and a Final Four performance.

The ACC was not a friendly host to the former great former Final 4 Point guards in ODU-CUSA coach Jeff Jones and the son of Bryant Stith - the all-time leading scorer at the school. CUSA upset 2-seed Mid-American and 1-seed Big Ten in close games with nothing to spare.

However, the South Champion ACC won by exactly their tournament average - 21 points - to advance to the championship of the Big 12-ASun winner. In the first 28 games of the tournament there were three 4-point plays, but the ACC had three in this game, an early one by UVA's Jerome, and then two by Zion Williamson. Below is the total score card. 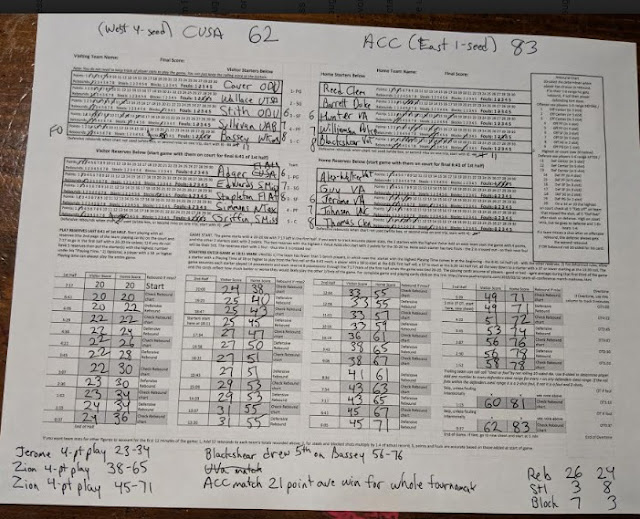 The magic continued for the underdog ASun, as they jumped to a double digit 46-36 with 15:09 to play. The Big 12 2nd team with only one go-to offensive player in Shayok from Iowa State struggled with multiple shot clock violations at the end of the first half for the second straight game.

However, Kansas' Lawson started to take over inside all five Big 12 starters finished in double figures in a furious comeback. At 52-45, Lawson stepped out an hit a 3-pointer, Moretti of Texas Tech stole the ball back and got it to Wade of Kansas State who drew a foul and hit both free throws to make it 52-50. Wade was a  preseason All-American in the real season but was injured for much of it including missing through tournament when Kansas State lost in the opening round.

Wade hit a 3-pointer to give the Big 12 their first lead at 58-56, and then Lawson scored, then stole the ball and dunked again to make it 62-58 with 4:12 to play and both Moretti and Wade grabbed offensive rebounds and scored down the stretch to secure the come-from-behind 70-61 win. 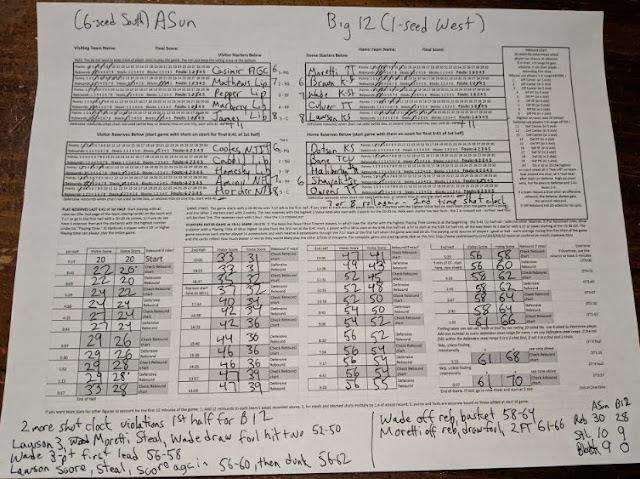 Three Texas Tech and three University of Virginia players had player cards in the Value Add Basketball game's 31st and championship game of the inaugural tournament since the game was invented. Their respective conferences, the Big 12 and ACC, each won their first four games to advance to the championship.

Iowa State's Shayok solved the Big 12s issue with their second team scoring, as he outscored the ACC 11-10 in the final 6:41 of hte first half that we playout to give the Big 12 a 31-30 halftime lead against an ACC squad that averaged winning their other four games in the tournament by 21 points.

The Big 12 found the one way to stop the seemingly unstoppable ACC - 10 steals on the 45 possessions we play out (which we use to estimate 15 steals to account for the 20-20 opening 13 minutes of action).

Virginia Tech's Blackshire did draw a fifth foul on Kansas' Lawson to pull the ACC within 43-39, but that Texas Tech's Owen back in the game and he later scored off an offensive rebound to give the Big 12 their first double digit lead at 57-47.

The ACC scored on five straight trips between 6:05 and 3:07 on the clock to have a chance, but an RJ Barrett three-pointer that we know from the dice would have gone in, was instead rejected by K-State's Brown  and they could get no closer than 70-64 the rest of the way, as the Big 12 won the title 76-69. 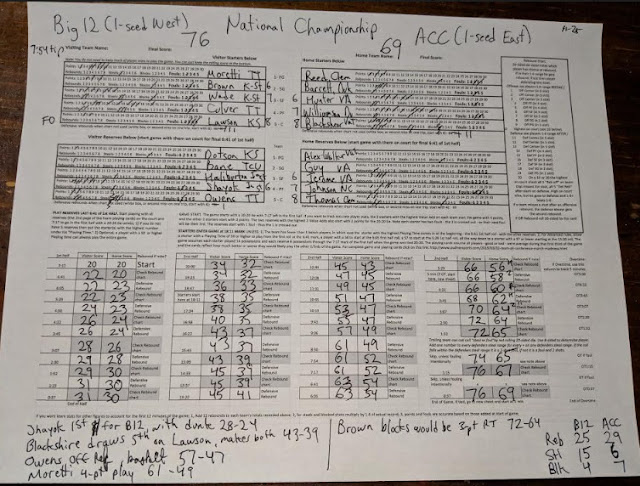