The first big upset of the Conference tournament occurred when the 2-seed American Athletic Conference fell to the 7-seed Colonial Athletic All-Stars. the actual www.valueaddbasketball.com calculations indicate the AAC would win the match-up by an average of eight points - however William & Mary Nathan Knight scored 24 points and helped the CAA dominate the boards for a 90-82 upset the CAA led the whole way. The CAA will now play the 3-seed Southern Conference, which snuck out a 67-60 win over the A-Sun. The other two teams allowed in the Southern Region are the 1-seed SEC and 5-seed Big South.

More important for the game, the game played in 41 minutes, making it fast enough for many board players.

* After beta testing several games, we adjusted the game to start with a 20-20 tie with 7:54 left in the first half - then went back and retroactively adjusted what the scores should have been with this change (it did not change any winners, but could in the past, as the favorite calculated to win by 50% more than the realistic score in a full 66-possession game, however, staring at 20-20 after 21 possessions, each team's chance of winning is equal to what it should be in a real game. For example, The Big East would have likely lost to the ACC but by a 81-65 final in the dice game (the Big East All-Stars would actually average losing by to the ACC by about 8 points, but the dice favored the ACC in the actual matchup).

Big East stars Shamorie Ponds and Markus Howard combined to hit three 3-pointers on three straight trips to cut the ACC lead to 26-25 with 7:54 left in the half. From that point it was all ACC as they surged to a 81-65 win.

After the ACC, SEC and Big East advanced to the Conference "Sweet 16" the game between Murray State's Ja Morant of the Ohio Valley Conference (OVC) and Buffalo's CJ Massinburg of the Mid-American was a back-and-forth affair.

The following is the bracket, followed by a photo and stats from the OVC vs. MAC game.

Here is photo of what the game looks like if you print the cards from the google doc, and then fill in the scoring sheet during the game.  was the actual scoring in the OVC vs. Mid American game. 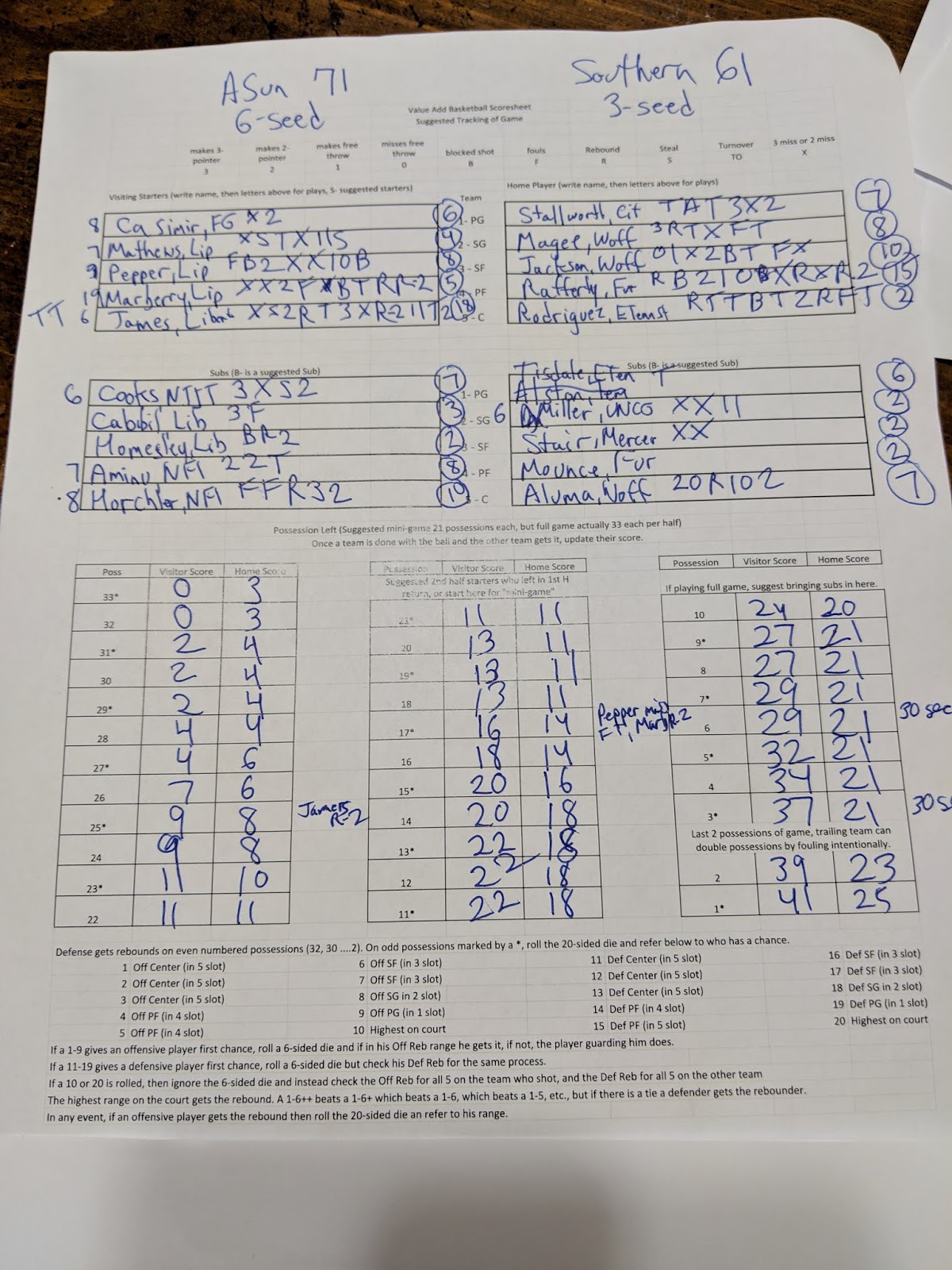 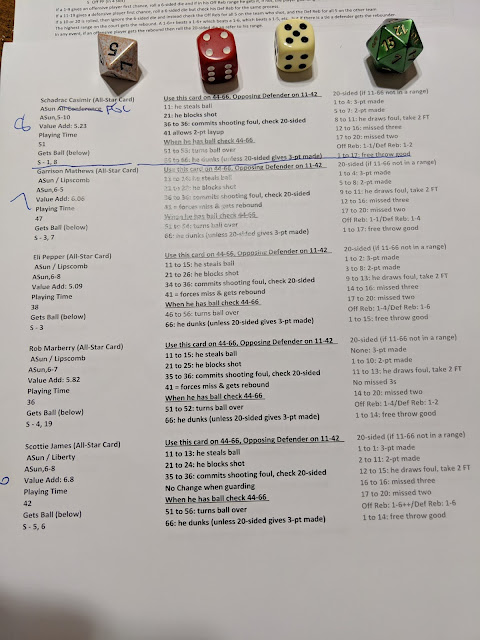 The first 9 Value Add Basketball games matching up all-conference teams were "chalk" withwthe favored team. However, when Southern Conference stars Fletcher Magee (Wofford) and Matt Rafferty (Furman) took their rests, the ASun proved much deeper on the bench and surged to a 17-point lead on route to a 71-61 first upset of the tournament. The 10-member ASun team featured 3 players each from Lipscomb and Liberty - 2 schools that also stunned teams in the NCAA and NIT tournaments this year. Scottie James from Liberty had a game high 18 points, while North Florida's Wajid Aminu grabbed 5 offensive rebounds in the closing 10 possessions of the half.


The following was the actual scoring of each All-Conference player from the sheet above. We only record and "R" for contested rebounds where the cards determine the battle for the rebound.We circle an "R" on the occasions where the best rebounder on the court at that time grabs the rebound from everyone else, but normally it is two players at the same position battling for the rebound.

In this game Justin Turner fouled out trying to guard Morant as Morant tied the game at the free throw line 63-63 with just 14 possessions left for each team (a full game includes 33 possession for each team each half).  However, CJ Massinburg went on a 6-0 personal run to make it 73-67 with 8 possessions left, and then James Thompson grabbed two rebounds away from everyone else on the court twice down the stretch to wrap up the game.