Three final wrap up notes before UVa and Texas Tech wrap up the college basketball season; 1, the updated www.valueaddbasketball.com records calculate that UVa is the first team since the 2002 Duke team (Carlos Boozer, Jay Williams and Mike Dunleavy) to have three of the 20 Most Valuable Players in the country. Zion Williamson did pass Anthony Davis but not Coach K's top assistant Jon Scheyer who was worth 14.35 extra points a game in 2010.

2, We published eight approaches to filling in the bracket in the Western Journal, and if Virginia wins five of the eight will be above the 90th percentile. The system that picked UVa (and only 8 percent of all brackets did) selected them based on the Value Add rankings adjusted for experienced guards. It is interesting that this system could rise to the top - while the system picking the team with the most NBA talent was the one bracket to once again have a terrible year. It seems hard to win with one-and-dones.

3, The All-ACC team dominated the East in the Value Add Basketball dice game, and the incredible group of stars this year caught a rebuilding Big East to win the Eastern Bracket in the 32 Conference simulated tournament. The ACC beat the MEAC by 30 and Ivy League by 40, before Sharmorie Ponds (St. John's) and All-American Markus Howard (Marquette) hit three pointers on three straight trips to cut the ACC lead to 26-25, but the ACC took over after that. Auburn's Jared Harper is the starting point guard for the SEC and Purdue's Carsen Edwards for the Big Ten, so if they win the South and Midwest in the simulated games then perhaps they will beat Virginia's stars after such near misses in the tournament. Anyone can play simulated games for free here. 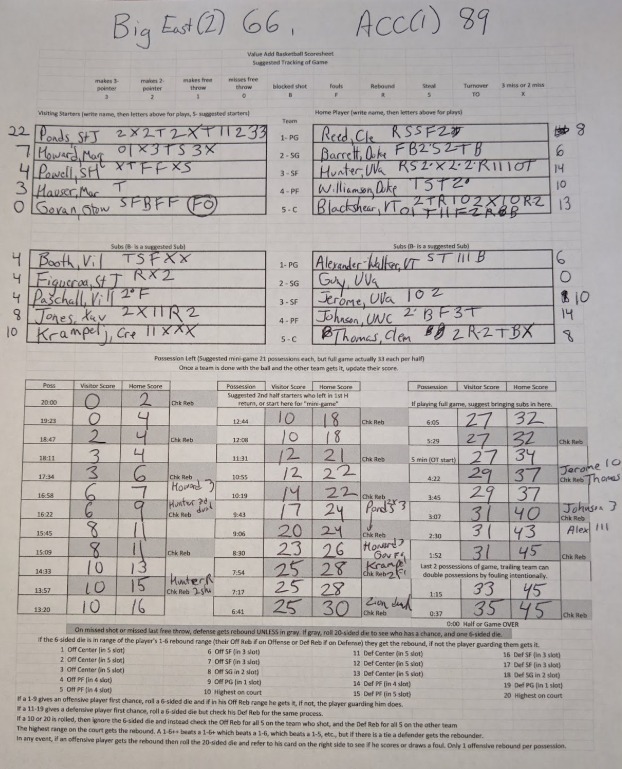