In our season using projected Statis-Pro Cards, two team has played much better in real life (Orioles and Tampa), 7 have been about the same in both, and tonight's series matched up the 2 that had been much better in Statis-Pro (Twins and Jays).

No there is one. The Jays received credit for a 4 games to 2 series based on credit for a sweep for another slugfest (10-3), but more interesting notes about the game occurred in the pitchers, duel in the second game.

When a player hits his max innings, he can stay in the game, but his remaining endurance SR, which had actually only dropped from 11 to 6 due to one walk and 4 innings ending, is automatically dropped to 0 for the 5th inning.

In his case that dropped him a PB 4-7 to a PB 2-6, but because the reliever who would have come in for the 5th was also a pb 2-6, so we left him and he got three straight outs so his PB stayed 2-6 through the inning, but the end of the inning would have made him a PB 2-5 for the 6th inning so he was removed.

In a throwback in the 8th inning, speed and defense broke the 0-0 tie.

Merrifield singled in the top of the 8th, but was thrown out stealing.

In the bottom of the 8th Urshela singled, and Nick Gordan pinch ran and stole 2nd.

Kepler the doubled him home.

Kirilloff then hit a drive requiring a clutch defense play by center fielder Springer, who is only a cd2. He did catch the ball, but due to the weak defense allowed Kepler to go to 3rd base with one out.

Note that while I recorded the play as a S8, it is not really a sacrifice fly because a player only gets that credit if a runner scores, but we record to remember what happened in the game.

Arraez then did have a sac fly, on an FD9 allowing the second run to score for the 2-0 win.

Here are the new standings with the Jays in 1st as the only team over achieving now. 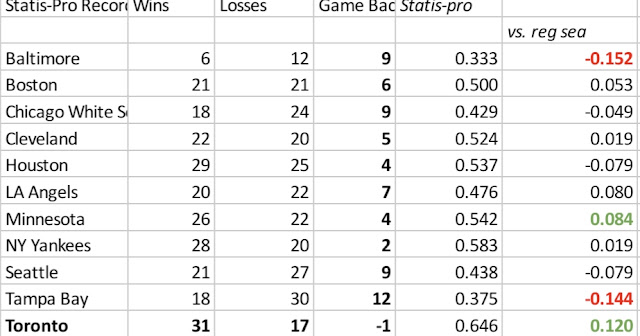 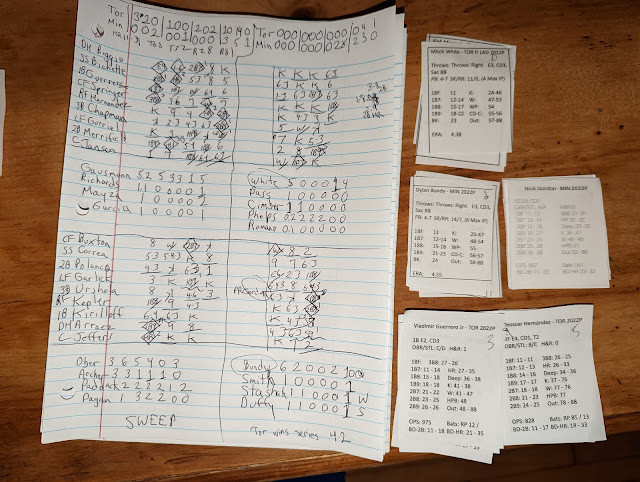 Posted by JohnPudner at 9:12 PM