We knew adding the Orioles to our league of the top 10 AL teams would be rough - these are cards for what the Orioles players were projected to do when they were 20,000 to 1 odds to win the AL East.

In real MLB they have been one of the greatest surprise teams ever and are only 8 games behind the Yankees and have a shot at a wildcard. However, the Statis-Pro Cards are overmatched, and for the second straight series they wasted on great start (ace Means 5 innings and left trailing 1-0) in a 2-0 loss, the were blown out 13-1.

The one bright spot has been leadoff hitter Cedric Mullins who went 4 of 8 and stole a base in the series.

For the Mariners, Ray went 8 innings with 13 strikeouts and 0 walks in the opener, and former Red Luis Castillo threw 6 innings allowing 1 run.

We are leaving the Orioles cards out to play the struggling Rays, who always seem to play better in real life then in the game.

Here is the grid of hard to hear matchups and records. The top 2 teams will get byesz and the 3rd through 6th place in wild cards once each team has played the other 10 teams each in a 2.game series. 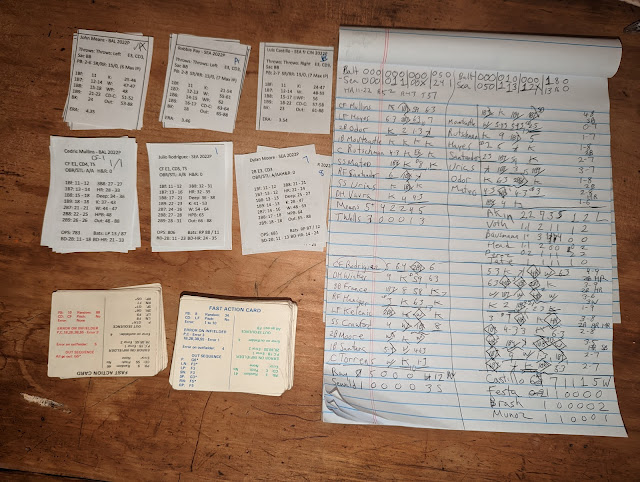 Posted by JohnPudner at 7:35 PM