Thanks readers for informing us the video on this blog was not working. It should be now.

Here is the tracker of all the match-ups in our Statis-Pro league.

Our fun addition of the Orioles to let every team play an even 10 series results in a lot of runs allowed - they've given up 7.5 runs per game - by far the worst figure in the league. However, it has been feast or famine as the photos at the bottom of this blog show. Their ace Means, while only a PB2-6, went 11 innings and allowed only 2 runs in his first two starts, including 6 scoreless inning against Tampa for the first win of the year - 4-0 in 10 innings on a Mateo grand slam homer.

The Orioles then fought back from down 4-8 for a second thrilling extra inning 14-11 win over Tampa.  It doesn't look like either of those two teams will make our 6-team playoff, but we list the standings and where each team ranks in average runs scored and allowed in our season.

First, a video on how I go through my 4-sided deck of fast action cards the 5th through the 8th time.

Then onto the Tampa vs. Baltimore series and the standings. 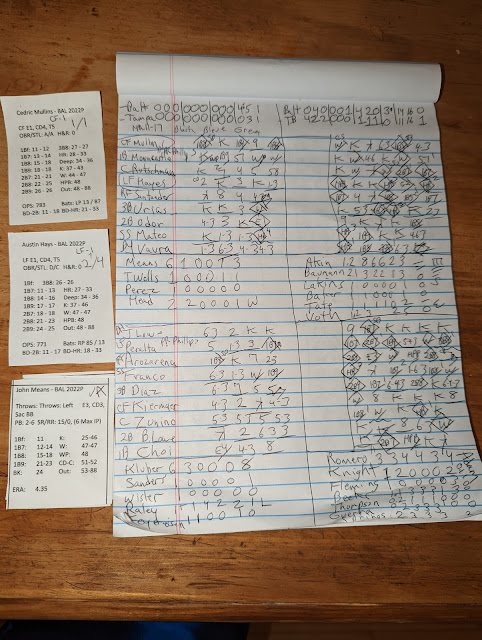 Posted by JohnPudner at 9:07 PM