White Sox ace Lucas Giolito finally debuted in our game, but had a tough luck loss as Toronto moved into 1st place with a 7-4 sweep win (led by 5 runs after 8 innings).

Giolito should have had a 1-0 lead after 3 innings, but 2nd baseman Harrison (below average CD2) misplayed a grounder into a hit, and Guerrero then hit a 3-run homer.

More bad luck in the next inning, as Jansen hit a deep drive, and the 62 on the next card would have been a deep fly out in most parks, but was a HR in Toronto (an 11-68 home run park range). The Blue Jays received credit for a 3 games to 0 sweep for leading by 5 runs after 8 innings without using their closer.

The White Sox did rally in the second game to get credit for a 2 games to 1 win and thus lost the series just 2-4.

Trailing 3-0 in the top of the 7th, the Sox hit 3 homers in 8 batters (Grandal, Sheets and Anderson) for the win.

note - To make it easier to print Statis-Pro player cards based on 2022 projected stats, we broke the pitchers cards in half and changed everything to a PDF. To print player cards with each sheet containing only one team, click for the 2022 Batters, 2022 Pitchers from Arizona to Miami, and 2022 Pitchers from Milwaukee to Washington. 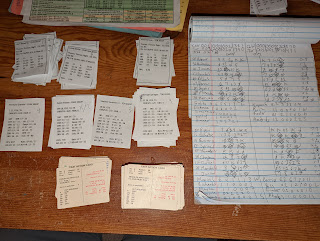 Posted by JohnPudner at 9:28 PM