If you want to try Statis-Pro with these free player cards and instructions, now might be the time after it just matched the actual World Series match-up. Our league of national and college conference teams is underway here as well, but keep revisiting this blog to scroll down for the Statis-Pro World Series games in chronological order.

We started our Statis-Pro season before we even knew if there would be a real season. The 15-team leagues were eventually cut down to 10-team leagues with five relegated, and then a funny thing happened. The Tampa Bay Rays not only had the best record in the Statis-Pro AL season, but then best the Astros in the Statis-Pro AL Championship a month before the actual AL playoffs ended the same way. Perhaps it was not quite as surprising that the Statis-Pro NL Champion also matched the real champion, though the Dodgers were stretched to seven games (against the Reds rather than the Braves).

Of course, it does not always work that way. Our biggest surprise Statis-Pro World Champion a few years ago were the surprising Arizona Diamondback's in Zack Greinke's last year there. However, it is interesting that in a year one would expect would have the wildest variation due to the 60-game actual season - that three of the final four teams were forecast by Statis-Pro and the same World Series resulted.

Based on the preseason Vegas odds, the Dodgers had a 33.7% chance to make it to the World Series, and the Tampa Bay Rays had a 10.8% chance. That means if you had predicted before the season that the that the Dodgers were going to face the Rays in the World Series, you would have had a 3.6% chance of being correct. No telling if our Statis-Pro World Series will play out the same as the real World Series of course - but the fact that over hundreds of games we ended up with the same results is likely an indication that Statis-Pro player cards are still a good indicator of how well players might perform. 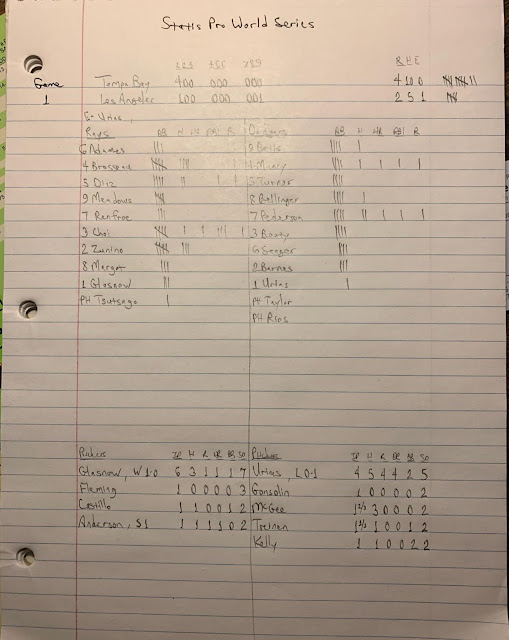 Rays jump to early lead again. Brandon Lowe belts a 3-run HR. But the Dodgers flex their muscles. First a stunning HR from pitcher Dustin May. Corey Seager then knocks a 2-run HR to tie it 3-3. In the 6th Cody Bellinger goes deep to knock Charlie Morton out of the game. After 6 innings LA leads 4-3.

Dodgers get an insurance run in the 8th on a Will Smith HR. 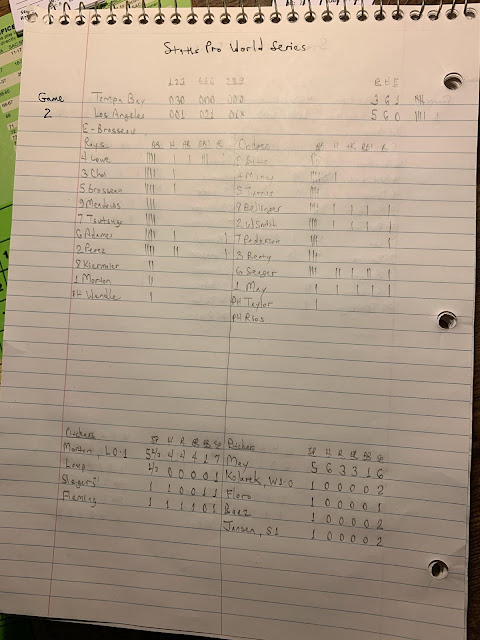 Game 3. The action went back to our AL Commissioner in Alabama, who records a different scoresheet. We played this game Friday afternoon, October 23, before the actual Game 3.

Yarbrough and Kershaw, two control lefties, matched each other for 6 scoreless innings. Yarbrough's last batter faced was Bellinger with men on the corners in the 6th, but the lefty-lefty match-up forced a popout to the catcher. Kershaw still had a no-hitter going through six. The tie was finally broken in the 8th when Pollock's 2-run homer off Castillo gave the Dodgers the edge. However, the Rays once again showed they are one of the best clutch teams ever, with three clutch-batting swings in the last 5 batters of the game. The first was Adames, who delivered an RBI double to chase Kershaw in the 9th and cut the deficit to 2-1. Arozareno then drove a clutch-shot that would have won the game foul, and then fouled out against Jansen to bring the Dodgers within one out of the win. However, after a Diaz walk, Meadows drilled a clutch-home run to give the Rays a 4-2 win and 2-1 edge in the series. After three 2-run games, we finally had a blowout. Snell lasted only 1+ inning and allowed 5 runs and 8 hits. Buhler went 8 dominant innings, allowing only 2 hits, striking out 13 and inducing 2 double plays.

Betts reached scoring position 4 of 5 times and scored twice on a 3 for 4 night with a walk. Smith's 1st inning 3-run homer was the only Homer of the game. Pollock joined Betts with 3 hits, including a 2-run single in the second and RBI single in the 7th to join Smith with 3 RBIs. Turner had the only other extra base hit for the Dodgers, an rbi double, as 12 of their 14 hits were singles. 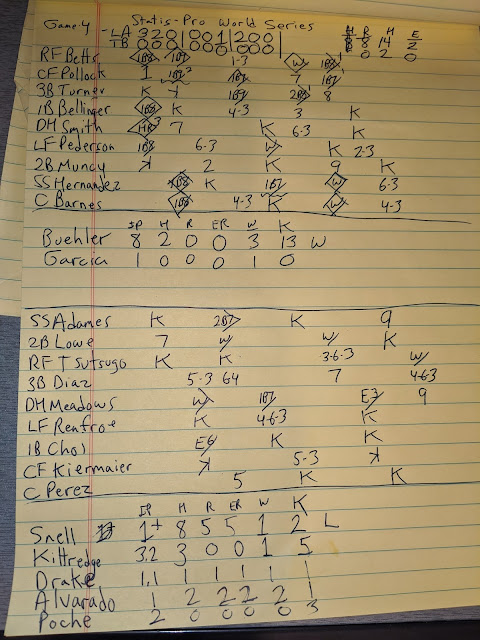 Game 1: Julio Urias had the game one jitters and got roughed up in the first inning. Not this time, as he retires the first 18 Rays. The "clutch" hitting continues with Cody Bellinger launching a 2-run HR. After six innings Dodgers lead 2-0.

Update 3: In the 8th, Urias walks the lead off batter to end the perfect game. Hunter Renfroe singles to break up the no-hitter, and Ji-Man Choi doubles to end the shutout. Urias gets the next two batters and Pedro Baez retires the third so LA still leads 3-1 going to ninth. Kept thinking something bizarre would happen in the 9th, but Baez stayed in and retired them in order. Dodgers win 3-1. LA leads series 3-2. 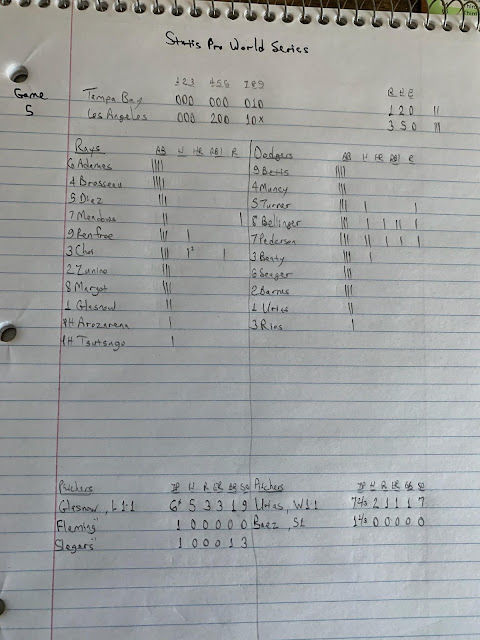 Game 6 - If Necessary - Los Angeles (May) at Tampa (Morton) - played in Alabama.

Dodgers 2 walks and 2 hits in top of first but adams cd4 at ss turns double play on what would have been a 2 run single for cd 3 or less - rays hold damage to 1-0.

Rays bats around in the 1st to take 4-1 lead and knock may out.

Alex Wood steps into pick up the innings, gives up 2-run he to diaz and game 7 tickets go on sale. 6-1 rays after 2.

Wood gives up hr to meadows, and walks three in the 5th, but floro comes in to get out of Jam. 7-1 rays. Morton is out of gas so own will need it to hold up.

The best 2 words in sports - game 7!!! Both bullpens strong and after Hill saved the pen with long relief, appears he is the only one to need to sit out Game 7. No other reliever on either team pitched to more than 4 batters.

Only excitement at end - rays were one out away from win with bellinger at the plate, when oliver drake said the magic words "not me blind one." Rays rattledm Chaz Roe comes in and gives up homer to cut it to 7-2. Then adames misplays grounder to short to keep dodgers alive. However, roe settles down and strikes out pederson, clearly like kershaw not using his playoff card with a 2 strikeout, 2 double play game. 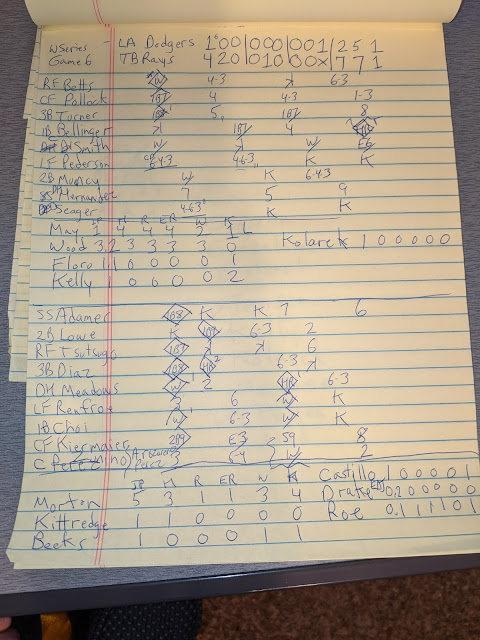 Game 7 - If Necessary - Yarbrough at Kershaw.  - played in Montana.

Kershaw/Yarbrough cruise into the 6th.

Then the defensive nightmare begins. Bottom 6th, after a Pollock walk, Turner singles and Meadows kicks it around, game tied 2-2. Bellinger grounds to Adames, but he boots it to put runners on 1st & 3rd. Next Will Smith grounds to Diaz who commits his second error of the game and two more runs score. Joc Pederson caps it with a 2-run 2B. After 6 innings the Rays had committed four errors to allow four unearned runs. LA leads 6-2.

Keeping with the theme, Mike Zunino commits another error and adds a passed ball. Joc Pederson rocks a 2-run HR to complete the rout. For the Dodgers, 6 of 9 runs unearned. LA takes the Statis-Pro title 9-2.

A hyped big game only to have one team meltdown and no drama, Statis-Pro remains so accurate to sports! 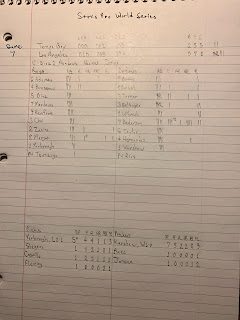