Randy Arozarena was not expected to make the Tampa Bay Rays this season. Things got worse when he not only test positive for Covid, but it lingered for weeks. With nothing else to do he just pumped out push ups every day. When he finally tested negative he emerged from isolation bulked up enough to become a playoff superstar.

In just 64 at bats, he slugged 7 home runs to emerge as a serious power threat. When Statis-Pro cards were made based on the combined regular season and 2021 Zips Projections from before the season, he became a nice right-handed power hitter off the bench for our Cuban team and next year's Tampa Bay Rays with a 24-28 Home Run range. In our current Statis-Pro World Series, he gives the Rays more of a Tommy Pham-like extra right-handed bat against the Dodgers.

However, in the playoffs he has continued to incredible streak with a slightly better pace, one more home run (8) in just one more at bat (65) then his regular season. All in all, this is 15 home runs in 152 plate appearances - one of every time he stepped to the plate this year he hit a home run. If we based a Statis-Pro card on his combined 2020 regular season and playoffs, he would have a Home Run Range of 24-38, basically matching the all-time fluke Statis-Pro Home Run range of 25-41 on Mickey Klutts' card from the strike shortened 1981 season.

The difference is Klutts hit .370 with 5 home runs in just 48 at bats to calculate that 25-41. This was in the middle of a short career in which he went to the plate 571 times - in essence about one season for a full-time player, and hit only 14 home runs in 571 plate appearances, so he would normally only merit 3 home run numbers on his card. Arozarena has been to the plate more than three times as many times as the 1981 Klutts this year, and half of those appearance have come from pitchers from playoff teams, during which he set the all-time playoff record with 52 total bases so far.

For our purposes moving forward, we are still using his Pham-like card in our Statis-Pro World Series, but we did decide to upgrade his card a bit for his play with Cuba in our international off season.

The math for creating the card and explanation is below: 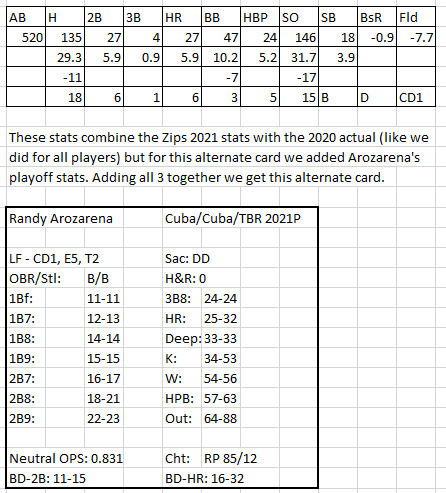 While Statis-Pro pitching cards are quite complicated to calculate accurately, the batters' basic cards have always been very simple with no need to change from the original formulas. After adding his stats from the playoffs and regular season to the 400 plus at bats Zips projected for 2021 previous to this season, you end up with 520 at bats and 71 other plate appearances (walks plus hit by pitch) for 591 plate appearances. You divide that by 128 to get a factor of 4.61 to divide by each stat and determine how many should be on his card. The batter has the action on his card half of the time, so you then need to subtract the 11 hits he will get off the pitchers card which leaves him with 18 more hits he should get on his card (11-32 on Random Numbers of 11-88). Six of those should be doubles, one a triple and six home runs. Tampa is a pitchers park, so he gets one extra "deep" number after the home runs. He should strike out 32 times out of 128 results on his card or the pitchers card, but pitchers average 17 strikeouts so subtract that and it leaves 14 on his card. Then he should walk 10 times each 128, but pitchers' cards average giving him 7, so that leaves 3 on his card. Finally he should be hit by pitches a lot, five times.

He projects to 18 steals, which as a Speed B, and while his BsR only translates to a D for OBR, we always make the OBR at least as good as the steals so it becomes a B. his Fld rating is actually very poor, so he gets the worst of five possible results with a Clutch Defense (CD) of 1, which translates into an E5 and T2.

Posted by JohnPudner at 2:05 PM