Click here for updated new cards for all players projected to play in 2021, sorted by Major League team, or you can select the players selected for their College Alumni All-Star or National Team. The updated cards will be provided as soon as they are merged and produced, but for now they are listed in these google sheets.

The updates from the previously released cards are for fielding. This is partly cosmetic, as we fixed all fielding lines by to match what Statis-Pro players are used to seeing on the line (e.g. RF-E2 CD4 T4, LF-E3). In addition, these were updated after the Gold Glove nominations were released for the 2020 season to upgrade any players who won a nomination to a Clutch Defense 5 if he did not already have one.

We also made some common sense adjustments for players' second position to include the following:

The cards were already set up to let the player play a primary position, and any other position at which they played at least 10 games in the recent 60 game season with an Error Rating increased by just 1.

Centerfielders (CF) can now move to RF or LF with their Error Rating only increased by 1.

Shorstops (SS) can play Third Base (3B) or Second Base (2B) with an Error Rating only one higher. Admittedly this was partly driven by our Puerto Rican team having three Gold Glove Shortstop nominees on the roster in Correa, Lindor and Baez.

Third-baseman (3B) can play First Base (1B) with the error rating increased by 1.

In addition, any player who played one to nine games at any other position can play that position with an E7, CD1, and for catcher TA or outfielder T2.

If a player plays a position he did not play during the season then he plays with an E10 and if Catcher a TC or if Outfield a T2.

Based on runs erased by fielders their Clutch Defensive Rating in the game is somewhere between a CD1 (worst) and a CD5 (best). However, we only give a couple of CD5 spots out based on this rating - we mainly save them for players who have been nominated for a Gold Glove in the last 4 seasons. We just still believe observations has to be part of fielding ratings - as great as the improvement in stats has been.

The following is the list of the new Gold Glove nominees for the 2020 season. The players whose cards are thus being upgraded to a CD5 are bolded, while the others were already CD5 players before the new rating. We list their current team in the Statis-Pro cards, as well as if they also have a card for our offseason (all-star from their country, or if from the US an all-star among the college baseball conference where they played. 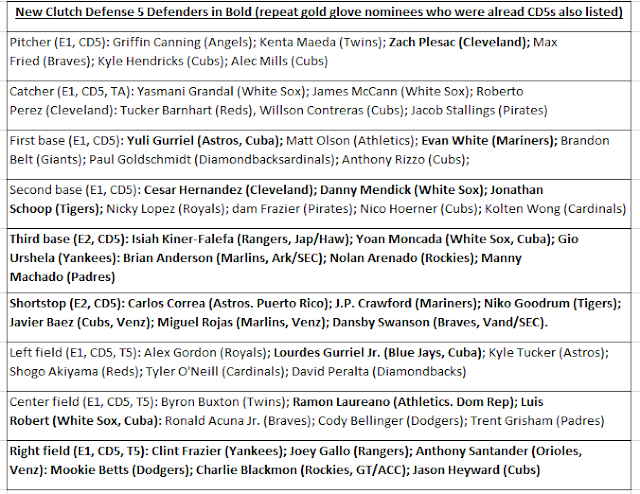 The following is the breakdown by team, with Puerto Rico getting two new CD5 Shortstops.

Posted by JohnPudner at 8:57 PM