I had just moved from my Value Add Basketball Game to Statis-Pro Baseball after the NBA Finals, but I decided to put Chris Paul's Wake Forest team up against UVa's recent national champs. UVa was the first team with three players in the top 20 at www.valueaddbasketball.com, and all three were picked in the NBA Draft including De'Andre Hunter as the 4th pick (he will make $14.5 million for his first two years while teammate Ty Jerome will make $4.5 million for being picked 24th ,while Kyle Guy UVa is not guaranteed a contract but was picked in the second round). In my game, UVa moved into 2nd place in the vicious 8-team ACC with the blowout of Wake Forest. 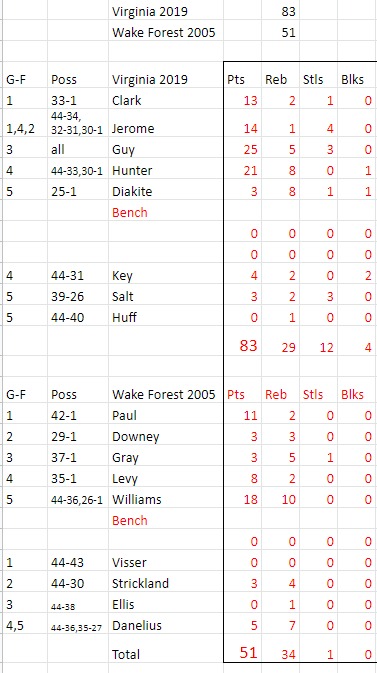 (Those who want to play the game should read the note at the bottom on the numbers to the left showing when each player plays.) Because average point differential is my tie-breaker, a team winning big does leave the starters in until the end - and in this case Kyle Guy hit a 3-pointer at the end and then Jerome stole the ball to end the game and give UVa an average win margin of +15 to nudge past Duke (+14) and UNC (+12) for second place behind Carmelo Anthony and the 3-0 Syracuse team. Since I also play possessions rather than actual time, so UVa's slowest in the nation pace is not a factor as they get a half dozen more possessions than they typically get in a game. They were the only team I've had in almost 60 games played to only allow 1 steal and they actually only had two turnovers in the game.

The other ACC game I played back-to-back to get all 8 teams up to three games was much more exciting. Georgia Tech (2004) Jarrett Jack grabbed six steals and drove to the hoop to foul Pitt (2019) point guard Lawrence Fields which was a key down the stretch. The game stayed within 2 points from 39-38 with 20 possessions left (12:08) to 55-53 (1:52 left) when Pitt's DuJuan Blair seemed to give Pitt to chance by rejecting a shot, only to have Georgia Tech's Luke Schenscher grab the rebound and score to make it 57-53 en route to a 57-54 win that left both teams at 1-2.

I do let four ACC teams make the tournament since there are five National Champions and in the conference, and the next closest is the Big East with three (even though I did move Syracuse from their actual 2003 spot in the Big East to the ACC as I was balancing the conferences.


Note for those playing the game. The game starts with a 20-20 score and 44 possessions remaining, which we count down from 44-1 on the scoresheet. I do show the box scores for all games in all 8 conferences in this google sheet, That sheet let's other players look at the numbers on the left side of the box to see what possessions I have each player in the game and at what position. Jerome is one of the more complicated rotation guys since Hunter and him can basically play anywhere from point guard to power forward. The numbers show that he starts the game at the "1" or point guard and the first range of 44-34 means those are the 11 possessions he plays at that position. he then gives Hunter a two possession rest during possessions 32-31 at the "4," then he sits out one possession (the 30th), and finally ends up at the "2" for the final 30 possession of the game (30-1). Braxton Key plays at the "2" from 44-31 until Jerome gets there.
Posted by JohnPudner at 9:00 PM