When playing a Statis-Pro player from a dead ball year when very few runs were scored against a pitcher from a live ball year you must adjust the results of certain plays from an Out to a Double.

Note: If you have a Statis-Pro game or want to try this free version, I lay out the 10 teams in four regional all-time divisions (click on see South, West, East, and Central suggested teams) I played off against each other - and while the 1927 Yankees did win in my league there but that was played before I calculated the adjustments in this blog for all eras. I also show you how to quickly calculate player cards for pitchers and batters from any error or even your own league (calculations here and google sheet to enter numbers to calculate player cards here or just see the new player cards or how our current season is playing out).

Back to the excitement of finally figuring out who the best team's in history were, Carl Yastrzemski in 1968 hit .301 with 23 home runs and Babe Herman in 1930 hit .393 with 35 home runs, so Herman's Statis-Pro card calculates too much better than Yaz's. In Statis-Pro the average pitcher controls the result half of the time and allows 11 hits (11-23 random number), 11 strikeouts (25-37) etc. The half of the time the result was on Yaz's card he would hit a home run on four of the 64 random numbers (32-35) which makes his card much worse than Herman's card, which yields a home run on seven random numbers (44-52) and a hit on 34 of 64 total numbers on his card (45 of 128 counting the half the time it is on the pitcher's card. Yaz's Statis-Pro team would rarely beat Herman's team in Statis-Pro because Herman and his teammates would have much better cards.

However, we know through modern analytics that both players were almost identical in their value to their team. Yaz's slight edge in the two summary hitting stats, 171 to 169 in OPS+ and 7.6 to 7.5 in Offensive Wins Above Replacement in a few more games played lets us know these are almost identical players.

When you scan to the bottom of this blog to see the average runs scored each season you see the reason for the difference - Herman's numbers were compiled in the best hitters season of all time - when 5.6 runs per game were scored - and Yaz put up his numbers in one of the two most dominant pitchers' seasons, in which only 3.4 run were scored.

Luckily, an adjustment as simple as the right-left adjustment in Statis-Pro balances seasons almost exactly so you can put both teams on even footing.

In this extreme case, every time a Random Number of 81-86 comes up on either Yaz's batting card OR the card of the pitcher he is facing, the result is changed to a double with any runner on first stopping at third base.

Using Bill James runs created formula, which still nails exactly the 4.4 runs per game being scored in the Majors this year, calculates that changing those 12 (6 batter card and 6 pitcher card) results from outs to doubles will increase the average runs scored by 2.37 runs per game to make the 1968 teams even with the 1930 teams - and Yaz equal to Hermann.

This folds neatly into the game, which already makes adjustments in certain left-handed pitcher (LHP) vs. right-handed batter (RN or RP) and vice versa, so it can be combined into this one adjustment table used for both batters' and hitters' results:

If playing a game between two teams from different years, look at the list below and subtract the R/G between the two years and apply it above. If the batters team is from 0.2 to 0.5 lower than the pitcher he is fancing, then an 86 is a double. If 0.6 to 0.6, then an 85 or 86 becomes a double, etc. the number to the right simply shows how much that would adjust scoring over the whole season. 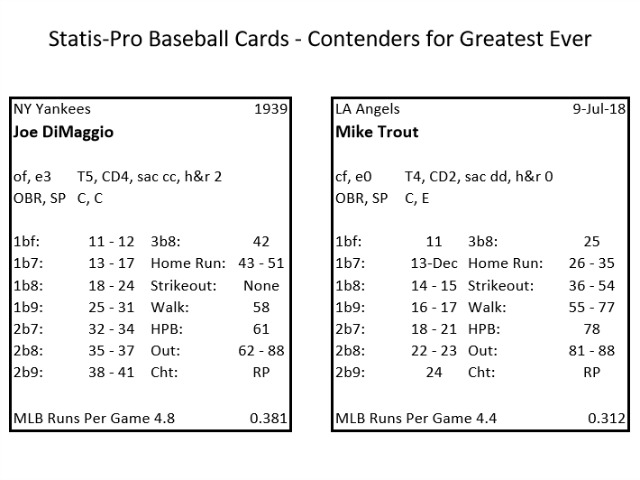 Posted by JohnPudner at 1:45 PM