We are playing third round games, so some Sweet 16 teams are in place while others still await one more game. Here is the bracket to date, with the seed each team was in their All-time Great Region. If a game still needs to be played, then I list the better seeds spot and then who they still need to defeat to make the Sweet 16. 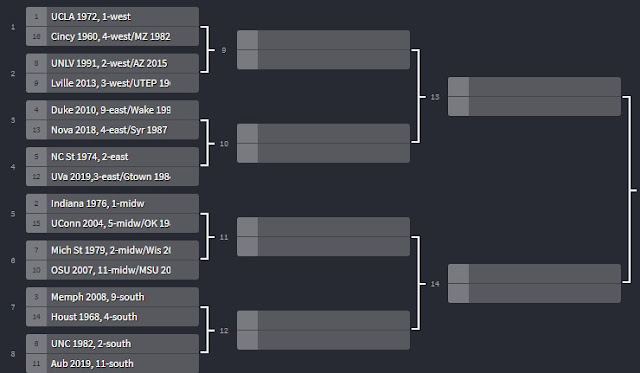 Since the bracket above was produced, here are the results of games between teams trying to make the Sweet 16:

The seeding indicates where I believe a team would finish if thousands of games were simulated, but the roll of the dice gives the chance for upsets. The following are teams that were top 4 seeds in their region, meaning I believe they were one of the 16 best teams of the 96 all-time great teams in the game, so more times than not they would make the all-time Sweet 16 but in this tournament they were upset.

Finally, I only allowed each team to have a maximum of one team for each century in the 96-team tournament. I will add some more great teams, though a team can still not have overlapping players (e.g. you can't take the 1967 through 1973 UCLA teams, we will only add the 1968 team of Lew Alcindor to the game to go with Bill Walton's tam in the 1970s. However, even with that stipulation, I believe these six teams would have made the Suite 16 if I included them in the game by allowing schools to have more than one team per century.