Always click here for most current updates on the 2019 Statis-Pro NL season. This blog archives a few weeks of game updates concluding with the results through February 21, 2019 games.


through Games of February 21

Manny Machado's Statis-Pro debut as a Padre could not have gone better for him. He was even better than his projected 0.878 OPS 28-35 Home Run range when he keyed a 3-0 lead with a RBI-double and then scored, followed by a third inning solo home run. However, the fluke Z play injury with Reyes and Margo colliding in the 4th not only led to a double and three run inning, but also left the Padres line-up down for the rest of the game as they finally fell 4-3 in 10 innings. 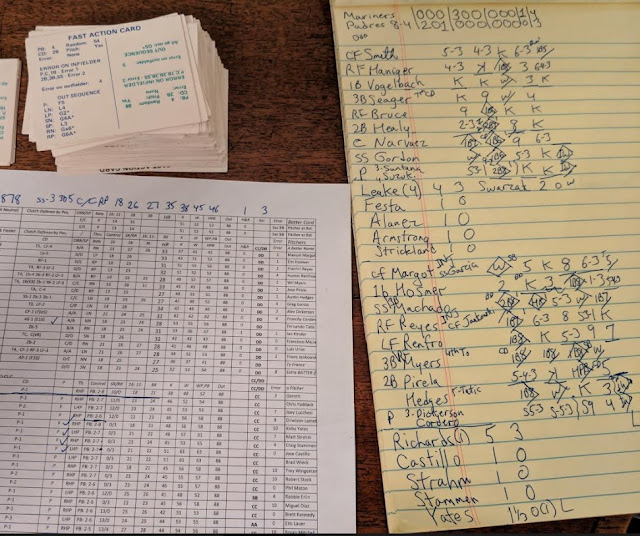 This 247 piece updates the Brewers moves through the eyes of Statis-Pro projected cards. Pretty big haul with two of the top free agent bats in terms of projected Statis-Pro cards, though they seem to still need a pitcher. 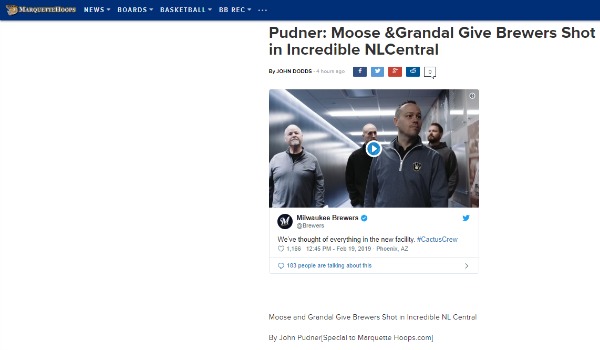 A short summary of each game and updated standings and grid of opponents faced is always on this google sheet. The following standings result from playing the free Statis-Pro baseball game using these 2019 projected player cards for 1000+ potential MLB sorted by current rosters. Updates on the previous games through January 17, 2019 and reviews appear here along with how strong each team roster seems and adjustments to how we use relievers and score 3-game sweeps vs. 2 games to 1 series.

After making hitting cards for all of the strong hitting pitchers in baseball, we set up the next Statis-Pro games to get everyone of them to the plate, and we also set up the schedule to get through every AL team playing at least one interleague game. The following were the games set up, and we only list the pitcher of a game if they were a strong hitting pitcher with their own batting card.

After a host of the best hitting pitchers  produced only one hit, two of the best in baseball came thorugh. The Reds Lorenzen produced the first extra base hit by a pitcher to go along with two Puig homers in a 3-1 win over the Royals. CC Sabathia then topped him with a 2-run homer as part of an 11-3 win over the Mets. We have purposely focused the third series for each team on trying to match up as many of the best hitting pitchers since creating their hitting cards and adding them to the 2019 projected player cards here.

We are playing these series as baseball considers finally getting rid of pitchers hitting completely by adding the DH to the NL along with other rules we are trying in our Statis-Pro season such as starting extra innings with men in scoring position and requiring relievers to pitch to at least three batters.

Interleague Series - Also featuring best hitting pitchers wherever possible in these 13th through 18th games for each team.


Arizona beats Houston 5-4 and 5-2
Verlander and Greinke were effective despite a rain delay that lowered effectiveness, but Verlander left after an 8th inning homer and Osuna gave up 2 more to lose 5-4 with Bradley shutting down the Astros in the 9th.

The Astros blew their second lead in a row when Harris gave up a clutch (BD) 3-run homer to Avila in the 6th and Chafin struck out Springer with bases loaded in the 9th for the 5-2 win.

Rays beat Phillies 2-0, then Phillies win 6-1 for SWEEP CREDIT
Former Astro Charlie Morton made his Rays Statis-Pro debut and missed the memo on no starting pitchers - throwing a complete game while Pham homered and A Garcia doubled in a run
Hoskin's 3-run homer &amp; Herrera's 2-run homer in the 3rd helped the Phillies to a 6-1 sweep win to count as a sweep, and former Yankees reliever David Robertson finished it out. (Arrieta 0 of 1, walk)

Pirates beat Indians 2-1, then Indians win 9-3 for SWEEP CREDIT
Former Rays pitcher Archer finally have Pirates an ace for a dual against Carrasco (one of many Indians who would be aces for most teams) and dominant stopper Vazquez wrapped it up.
Ramirez reached 4 of 5 times in leadoff spot including a steal and homer to give one of many Indians ace starters, Bauer, the 9-3 win for sweep credit.

Dodgers Sweep Rays 3-2 and 1-0
AJ Pollock reached three of four times in his Dodgers debut and made a clutch diving catch to end the 6th and keep Clayton Kershaw in a 2-2 tie en route to a 3-2 win. Bellinger made a clutch diving catch in centerfield the batter before, and in the 8th Turner made a diving catch at third base to end what had been a bases load, no outs rally. Bellinger then led off the bottom of the eighth with a game winning homer, and Jensen got the save in the top of the 9th (Ray Sac, K, Kershaw 0 of 2)
Az Dyson (cf) and Peralta (lf) threw runners out at home and Peralta added a clutch defensive diving catch, but an error from Ahmed (ss) on a DP grounder let the Dodgers win 1-0. (Hill 0 of 1)

Giants beat Cardinals 2-1 and 13-2 for SWEEP CREDIT in second game
11th inning sac fly ended dual of top 2 hitting pitchers, both replaced in 9th by 2 of best closers in Cards Miller and Giants Black. Giants SS Crawford, a rare Clutch Defense 5, made specacular catches in 7th and 10th.
Posey and Crawford had 4 hits each of Giants 17 hits for 13-2 sweep. Duggar ph for Samarejzija and had 2 hits in 7-run 5th. Crawford 3rd spectacular gem and 2 doubles while Panik's 3-run homer wrapped series.

Rockies blew another 9th inn lead but clutch defense 5 arenado made a diving catch only he cod have made to end top.of 9th and then Dahl launched a GW HR to end it in the bottom of the 9th and salvage a split (Freeland 0 of 2)

Reds beat Royals 3 to 1
Puig homered twice and a pitcher finally came through at the plate when the Reds Lorenzen, with the best hitting card of any pitcher (Home Run on 24-26 on Random Number with PB skipped for pitchers batting) doubled and scored in a 3-1. Former Reds Billy Hamilton played centerfield for the opposing Royals. Lively for the Royals went 0 for 2.

Brewers split with Tigers in 2 extra inning games - 3-2 win and 3-4 loss. Grandal stepped in as new catcher cleanup hitter with 20run homer and Yelich's sac fly in the 12th delivered the Brewers win with Knebel going extra innings for win.  (Suter 0 of 2). Rodriguez 2-run homer offset Yelich's 2-run double tied game in 6th before Hader came in to shut Brewers down and force extra innings. However, on otherwise great fielding team grounder to weakest spot, 2B Perez, resulted in game-winning hit for Tigers in 10th.(Woodruf reached on error and wal, Ross 1 of 2 with single.

Posted by JohnPudner at 1:47 PM