He did not disappoint, drawing walks his first two trips and then blasting a home run the first time he saw something in the strike zone as the Canadian/Netherlands team blasted the Japanese/Korea team 11-2 to start play in the six-team international Statis-Pro league. Below is the play-by-play alongside the actual Statis-Pro cards based on projected 2019 stats, but listed in row form (from top to bottom, Japanese batters, Canadian pitchers, Canadian batters, and finally Japanese pitchers). We do throw in the Netherlands Antilles to give the Netherlands the reach of their old kingdom into the Caribean as well. 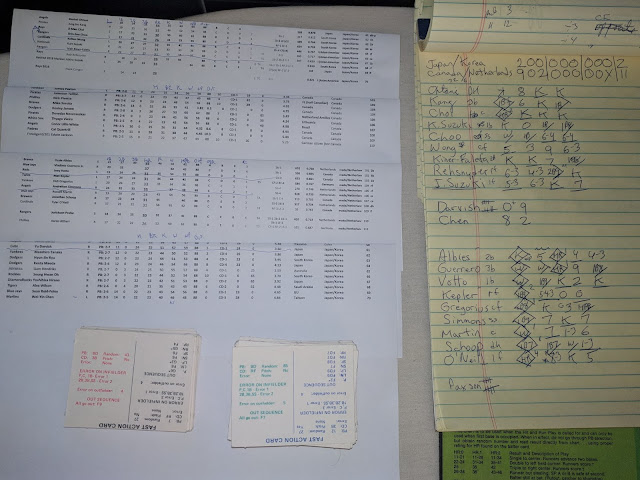 Canada did have a great advantage in this matchup because their starting pitcher James Paxton was a lefthanded PB2-8 for his projected 3.36 Pure ERA (based on expected ERA if a pitcher had average fielding and ballpark behind him). Facing the left-handed heavy hitting Japan/Korea team Paxson had a huge advantage. While the Netherlands and Canada are thousands of miles from each other, we grouped them and a few other European players who were born closer to the North Pole than the equator (both countries reach above the 51 North Degree Latitude.

The Canadians are balanced with both their starting rotation ERA (3.97) and starting line-ups OPS (0.770) both falling in fourth place of six teams - but in both cases just a few points behind third place.

Even with Ohtani, the Japanese line-up is a distant 6th place in OPS, putting a lot of pressure on the pitching. We base participation on current rosters, and because Ohtani is only projected to hit next year they did not have the dominant pitcher to match Paxton in the opener, having instead to go with Yu Darvish who is projected to return. Because they were the only team to lose their opener by 5+ runs the game counts as losing a series 0-3, putting them temporarily in last place:


Obviously Venezuela is at a disadvantage in this opening series as they are projected as the 2nd best team but facing the favored Dominican Republic in their first series.

Posted by JohnPudner at 4:27 AM